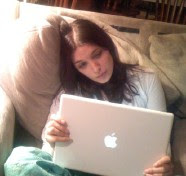 If I was more predictable, normal and maybe just a better person, I would say that the best Christmas present was spending time with my beautiful family.

But that wasn't it, beautiful as they are. I even have photographic evidence of their beauty in the form of the picture of Jenn, at right.

If I was more curmudgeonly (oh, wait, I am!) I would say that my best Christmas present was that Jenn graduated from college so my monthly bills have been cut in half.

That wasn't it, either, nor was it my first grandchild on the way, the many medals Ronda won this year or the fact that I finally finished the first draft of that final report on the Disability Access project that I have been working on the past two weeks. Give up?

On Christmas Eve, my husband walked into the room and said the last thing in the world I expected to come out of his mouth. No, smart-ass, it wasn't,

In fact, as outspoken as I am in life in general, Dennis and I almost never argue, due primarily to the fact that he is one of the most laid-back people on the planet. It's fortunate that we are married because if he lived alone, he could probably be dead for three or four days before anyone noticed. They would just think he was quieter than usual. No, he came into the room where I was working on Christmas Eve and said,

"Would you by any chance want to not work and be a housewife?"

He went on to explain that he had been looking at our expenses now that Jenn has graduated from college and he figured that we could get by on just one income. I laughed and said,

He shrugged and said he thought as much, but he just thought he would bring it up as an option. No, this is not the blog where I announce I am going to ditch the whole corporate thing and have the cleanest floors in Santa Monica. Still, I have to say I was really touched. I left home 34 years ago when I was fifteen, have been married three times and never for a day in my life have I ever had anyone else support me while I didn't work.

The more I thought about it, the more intrigued I was by the idea. Well, right now, I have two more reports to finish and a grant to write, but in February, here is my Christmas present - I am going to take a month off for the first time in my entire life.

Some of you may be skeptical. Specifically, those of you who are aware that I went to the Bahamas three times to try retirement and my record of time without working was 72 hours may wonder about my ability to take a month off work.

Those of you who think that I am going to just quadruple the time I donate to the USJA and other judo organizations, think again. I am not sure what all I am going to do but I am very excited and looking forward to it. Here is my list, for now:
What would YOU do if you had a month off just to do whatever you wanted?
----------------------- REQUIRED JUDO TIP -----------------------------------------
Background: When Ronda was 12, the local black belt association (Nanka) started a program for high school and college students, one of those perennial efforts around the country to help our young people move "to the next level". Hayward Nishioka was running the program, and, although Ronda was just a skinny little green belt in the eighth grade and not old enough or a high enough rank, I brought her any way. They let her stay, not because she had shown any amazing promise at that point but rather because I am a rather difficult person to say, "No," to. Let's just leave it at that.

The first day they met in the classroom instead of on the mat. Hayward had all the players watch videotapes of matches and discussed analyzing why one person won and another lost. He talked about gripping, false attacks, strategies when you are ahead or behind, and how those differ at different points in the match. I told him afterward that I thought it was way too much for Ronda at her age, but Hayward urged me to try it anyway. Since Ronda won almost all of her matches, even at that age, and like all kids, she liked to watch herself winning, I didn't see the harm in it. My view on judo for young kids is that anything that makes them enjoy it is good. The other day, Ronda says to me: 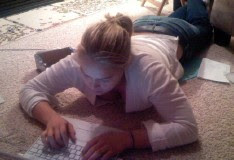 I think I really benefited from you and Hayward having me analyze films of myself and my competitors from the very beginning. I see a lot of U.S. players who will lose the same way over and over. Because you drilled it in my head from the very beginning, whenever I get a chance, I watch my matches and try to analyze every mistake I made. I also look at myself and think, if I were the other player, what would I be doing to beat me. I don't see other people doing that. They say things like , "I beat myself," or "My judo is better but he won."
I think that is just stupid and arrogant. Obviously, your judo isn't better because you lost. I know other people are studying me looking for my weaknesses, so I am studying myself and trying to find those weak points first. I want to be like trying to hit a moving target. At the same time, I am trying to see weak points in other people that I can take advantage of.

I admitted that, although I was all in favor of her doing videotape analysis when she was 15 and on, it was Hayward's idea to start so young. She must have been feeling in an unusually sweet and complimentary mood that day because she went on,

"You know, Mom, I think the thing that you did - that we did - right was to always be looking at what I needed to work on and who could help me with what I needed next. Like, you took me to those practices with Hayward. Then, when I was 16, do people really think we shut our eyes, put a finger on the map and came up with Boston? Remember how much we talked about what I needed to improve and how well Pedros was just the right fit for that? I think that is what I learned first from you and later from Hayward, to really analyze my judo. I don't see many other U.S. players doing that and I think that is one reason more of them don't win."

Ronda: Living proof that not all blondes are dumb.
P.S. For those of you who now think you are going to watch videos and become great judo players, I want to throw in the reminder that Ronda trains her ass off, too.

ciao AnnMaria if you want to see a nice site with some nice videos about Jimmy Pedro and Americas judoka in Italy go to judotretorri.com
I wish you the best 2008 greetings
Ric

nice post. this is a kind of cute. actually so cute . i like this postorange county treatment center

very useful info for me.Because i'm new in blogging and i'm need good tutorial like your post. Nice to visit here, and don't forget to visit our blog to and give me more spirit to continue my blogging activities.

I love to give my dad an Ipad but I wish there's gonna be a sale. He only knows facebook and youtube so I guess Ipad would be the perfect gadget for him.

Very entertaining subject, I will bookmark your website to check out if you publish more in the future.Thanks

Looks like the author has massive awareness in the subject. Thanks you for the info.....

I have to say this has been probably the most helpful posts for me. Please keep it up. I cant wait to read whats next.

I agree wholeheartedly with this. When martial arts were watered down into sports, people thought it was okay to apply that "just do it" mentality. That's stupid. It may work for a complete beginner, just to springboard them from making too many assumptions from their state of ignorance, but when you already know what makes good Martial Arts you HAVE to apply analysis to it. In modern times this is considered "going the extra mile", but strategy and figuring out your weaknesses is *necessary* for the martial arts. We know this from historical literature.

"I think I really benefited from you and Hayward having me analyze films of myself and my competitors from the very beginning. I see a lot of U.S. players who will lose the same way over and over. Because you drilled it in my head from the very beginning, whenever I get a chance, I watch my matches and try to analyze every mistake I made. I also look at myself and think, if I were the other player, what would I be doing to beat me."