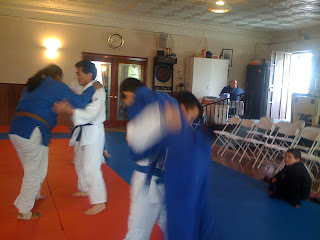 Jim Pedro, Sr. is always telling me that the most important element in coaching is caring. I think that is only part of the picture.

He is positive that the reason that more athletes don't win in America is that we have a lot of coaches - and a high proportion of people in political positions - who care about themselves more than they do the players. As an example, he points to people who will pay $1,500 to send an athlete to the Junior Panamerican Championships (or some similar tournament) to compete in one or two matches and maybe lose both of them, but won't pay half that for the player to go to a junior nationals and a training camp because it doesn't impress people near as much to say,
"I have five players who went to judo camp this summer,"
as to say,
"I had two players on the U.S. team to the junior Panamerican championships."

As with most things, he is right about that. Still, there is more to it. There are judo camps that are not all that great. As a parent (not as a coach), I do think it is perfectly okay to take your child to a tournament in Costa Rica just because your family wants to go there. If I had a kid in high school, you better believe I would be taking her to the high school nationals in Hawaii next year.

Caring is what makes you get up when you don't want to and drive some ridiculous number of miles to Fresno (as I did last weekend) and Barstow (which I will do tomorrow). Even you folks who live in Fresno and Barstow must admit that these are not widely-regarded as the garden spots of the universe.

In fact, when I asked Coach Ernie Smith, who had Belinda Binkley, Delores Brodie and Chuck Jefferson all make senior international teams how he ever got so many good players from a town the size of Barstow he answered,
"I tell them if they get good, I'll take them out of Barstow."

You have to also have competence. I realize that I do not know nearly everything about judo and I am always trying to learn more. However, I am competent. Even though I am an old grandmother and weigh as much as the right half of most male judo players my age, I can still beat most people my weight and half or a third of my age on the mat, even after six knee operations. I can tell you why your grip is not working and you are getting thrown, why people get out of your pins, how to avoid being armbarred and demonstrate six matwork counters, all without stopping for breath. I have been in judo 38 years and for much of that time I have STUDIED it, watched videos, grilled other coaches, watched players, tried, failed and tried again. Unfortunately, too many judo coaches settle for being less than competent. They teach the two throws that worked for them when they competed, have the players do lots of exercises and uchikomis, fund players to tournaments out of their own pockets and feel genuinely bad when their players lose. They don't understand why their players lose. They tell them to train harder, pull more, improve their technique and turn.

When my kids were in soccer, there was a team whose coach had a metal clipboard with magnets showing where the defense and offense were supposed to be, by position. My kids' team had a mom who was coach who said, pointing at offense,
"You kids, kick the ball in the net over there."
Then she pointed at the defense,
"You kids, don't let the other team kick the ball in the net here."
My kids' team won because they understood what the hell she was talking about.

Terry Kunihiro (a good referee from San Gabriel Judo known mostly these days as Aaron's dad) once told me that he taught little kids judo by telling them to turn and pull.He is exactly right and it is too bad he can't find more time to teach the little ones because he is really good at it.

By the time the athlete is 13 or 15, you need more. Terry, and the other competent coaching staff at San Gabriel understand that, but, unfortunately, it is not a universal recognition. So many coaches who had seven- , eight- and nine-year-old national champions are shaking their heads and saying,
"I just don't get it. We must be doing something right. All of our kids won two years ago."

Jim would say these people are not competent because they just don't care enough to change, study and get better. Maybe. I think some of them just don't understand what is going wrong. They are plain confused.

Confidence. I think lack of confidence is one reason we don't have more coaches and more female coaches in particular. We aren't developing a new generation of leaders in judo because we eat our young. By that I mean when a new coach or referee comes on the scene, a young person who wants to learn and move up into "the elite ranks", the response of the existing powers-that-be is often to try to put that person in his or her place. When I first started coaching, I must have heard hundreds of times,
"Just because you won the world championships doesn't mean you can coach."
"Judo has changed since your day. The things you won with won't work any more."
"You've never coached anyone who won junior nationals, what makes you think you can coach?"
"There is a difference between coaching juniors that win and seniors, you're just not at the level of these other people."
For a while, I questioned myself and wondered if I really could be a good coach.

And then it clicked - f@ck that! I mean seriously, who the hell were these people to tell me that I couldn't coach. I DID win the world championships and that proves I know some judo and who the hell were they to put that down? Did they have any actual proof that the things I won with wouldn't work any more? No. Not a damn thing but their opinion and I taught those things to my kids and other people's kids and they DID work and the kids DID win. My coach had never coached anyone to win the world championships until me. Probably my favorite movie line ever was from Volcano, where the scientist says,
"There's never a history of anything until it happens. And then there is."
As a coach, you have to cultivate that belief in yourself, in what you are teaching and pass it on to your players. That is far harder than you think because many people will put you down and tell you that you can't do it. I had the advantage of having won a world championships and I still questioned myself starting out. Anyone else without that advantage who still perseveres and becomes a coach in the face of all the obstacles has my sincere admiration.

It finally dawned on me that many of those nay-sayers were other coaches who did not want the perceived competition. Of course, on the other hand were people like Hayward Nishioka, Jim Pedro, Sr., Steve Scott, Jim Bregman, Blinky Elizalde, Sarko Balian, Steve Seck, Tony Mojica and others who were more than willing to answer any question I had, to show me what worked for them as a coach. It is probably no coincidence that many of those I just mentioned were my old teammates at Tenri.

Consistency. It is easy to suck it up and go to practice for two nights during one week. It isn't even that hard to do it for two nights a week for six months. To do it three nights a week for twenty years like Tony Mojica or Kenji Osugi or Gary Goltz or the other people who are the backbone of judo - that is just plain amazing. Still, how long does it take to get a black belt? How long does it take to train a player to international caliber? Years.

For those of you who think this is too daunting, I highly recommend finding a coaching TEAM like we have at the training center. Between the three main coaches, someone is always there, even if one of has an anniversary, or needs to work overtime. With the number of black belts we have assisting, there is always someone willing to go to the tournaments to coach. So, our players always have someone in their corner.

Courage.
"The right way is not always the popular and easy way. Standing for right when it is unpopular is a true test of moral character."
As a coach, you have to have the courage to tell people unpopular truths. In the last week I have told:


The last is probably the most unpopular thing I do and some people will probably hate me forever for it. How can I tell someone who is the junior national champion eleven times over that he doesn't train hard enough, needs to develop more combination, is not physically strong enough to win the men's division? Because it's true. Some people may think that makes me a horrible, uncaring person that I would say something that would hurt a player's feelings.

I would say that there is more to coaching than being a caring person.
Posted by Dr. AnnMaria at 9:53 PM

All that you need to do now is add a paypal button to the blog.

I love your blog.

We met once many years ago.

I worked for your late husband Ron at Rohr Inc. in Riverside, Ca.

He asked me to pick you up at the college. You were pregnant and very cranky.

I also loaned him my camper van one time to pick up a group at the airport. I am sure if you went on that trip you would remember that beast of a van.

I loved what you had to write on your blog. It is great to see how successful you have become. I know Ron was very proud of you. He told me so many times.