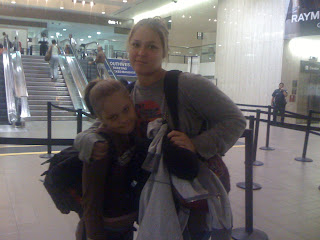 At 9 p.m. tonight I dropped my two youngest daughters off at the airport. For the first time in twenty-two years I will not have any children in the house for over 24 hours. Julia is ten years old and has been lobbying to be allowed to go somewhere by herself. She asked about a hundred times if she could go to the Mayo Quanchi camp. I considered it, but when I found out that Ronda would be in Spain and could not go with her, I vetoed that. Our compromise was that she went back to Boston five days early for the USJA Junior Nationals. She is going to stay with her oldest sister, Maria, and "help" Maria and her husband with the new baby.

Letting go does not come naturally to me. I don't feel guilt about it, either. In my opinion, too many people adopt a model of "low maintenance parenting" wherein if their child wants to try something against the parent's better judgment and causes too much trouble, Mom or Dad will shrug and let Janey fly to New York to visit a boy she met on the Internet or allow Joey to live on a diet of Red Hot Cheetos and Yoo-hoo, rationalizing, "Children are resilient."

I believe that it is a parent's responsibility to care for their children in every meaning of the word. When people ask me,
"What are you so worried about? What could go wrong if your child is staying with someone else?"
My answer is,

"One hell of a lot more than when they are staying with me."

While I am reluctant to have my children more than 50 feet away if I can help it, I realize that independence and thinking for oneself are crucial to a good life. There is an old story often used as an analogy to adolescence. A woman was watching a butterfly trying to get free from its chrysalis. The poor thing was struggling and seemed in pain. Taking pity on it, the woman gently pulled the chrysalis away. What she didn't know is that struggle is what pumped the fluids into a butterfly's wings. While the rest of the butterflies were fluttering around, that one spent the rest of its life with stunted wings on the ground - until somebody stepped on it.

Okay, well maybe I made up that last part. It's just a bug and the story is probably all a lie and scientifically inaccurate anyway. The point, though, is that sometimes struggle is necessary and developing independence is a good thing.

As for judo, one of many factors stunting our growth, I think, is a lack of independence. This happens at the level of developing clubs and programs. So many instructors in judo have the overt or implied attitude that, "You could never be as good an instructor as me. You could never have my knowledge."

At 30, 40 and even 50 years old, we see many coaches as assistants to their sensei. In karate, I see instructors encouraging their students to get out and start their own schools. Often, if a judo player does that, the instructor is outraged, "How dare he/ she think of competing with me for students?"

If you develop people who can go out and start their own programs, then good for you! You should be encouraging your students to do that, not putting yourself forward as so above them that they could never compete with your greatness. Get over yourself!

In their twenties, I see too many judo players who could be good held back by coaches who refuse to let them think for themselves. This is NOT the same as saying they need to move away. As soon as a player shows a tiny bit of talent in this country, you have the vultures circling saying,

"You need a coach of elite players to grow. You must come to me."

(Imagine this in a Darth Vader voice.) That's a whole different topic.

No, what I mean is that when I listen to most elite players talk about judo, I can hear their coach's voice. In fact, very often, they are saying, verbatim, words I have heard their coaches use. If their coach believes that gripping is the be-all and end-all of judo, they focus on that. If their coach emphasizes conditioning, they are the most conditioned athlete in the room. All of that is fine, but you need to be more than your coach. If you are Jimmy Pedro the Third, or AnnMaria, Junior or Mike Swain 2.0, you are not going to be anything more than an imitation, and I see a lot of that.

At the Trials last weekend, I heard several coaches lament that a player would win,

When you are ten, that is true. You are being told not to lean backward on o soto gari, turn your head when you do seoi nage. As an adult, you need to think for yourself. Yes, a good coach helps immensely. However, if you have ten or twenty years of experience, this is something important to you that you have been doing much of your life, you have traveled around the world, you are the person in those positions on the mat - then you certainly ought to have thoughts to contribute.

It isn't an either- or proposition that you know everything, which most teenage elite athletes believe, or that your coach knows everything, which many elite athletes in their twenties seem to believe. I was extremely fortunate that my own coach was only five years older than me. When I won the world championships, he was 31 and I was 26. Partly because we were close enough in age, he didn't adopt that "O-sensei" attitude. I would argue with him and we would usually agree to try one way and see the outcome. For example, he wanted me to compete at 52 kg and I thought I could win at 56 kg. We agreed I would try the heavier division and, if I didn't win, I would cut weight. Some of his ideas, like all of the matwork uchikomis, seemed a perfect fit for me right from the start and I never objected.

In the end, you need to believe in yourself. A good coach brings you to that belief. Whether your coach was a world champion or not, you need to believe that you can go out and compete better than your coach ever did, that you can take everything he or she taught you, add more ideas of your own and be better than anyone in the world. To me, when it comes to winning on the world level, two points are obvious.

1. Belief is strength.
2. There are no stupid champions.

People need to learn to be independent, to think for themselves, to believe in themselves.

As for what I am going to do with all of the children gone, I told them that we are going to have sex and do naked cartwheels in the living room. My niece, Samantha, objected,

"I don't believe that Uncle Dennis could do a cartwheel if he lost a hundred pounds."

"I wouldn't see Dennis doing cartwheels under any circumstances. But maybe he has secret tricks I don't know about."

Well, I have to go now, Dennis is waiting in the living room.
Posted by Dr. AnnMaria at 11:01 PM

My son is about to turn 16 and he wrestles and wants to go to a camp in Utah. His mother calls me and is asking every question in the book about the camp, who is supervising the kids blah, blah, blah! So I just asked her are you nervous about letting him go and she confessed she was worried sick. And I realized that he has not been away from her at all yet. I mean I would worry a little Im sure but as a father I think men are different whe it comes to separation. Now being a new father of a 2 year old and being older now my views have changed as it comes to having a girl. Girls being molested in any way under the guise of a sports official just sickens me, but I am not suprised. As a Law Enforcement official of the great state of California, I have seen the sick minds of these molesters. Due to registraton laws and awareness, many victims are coming forward but I think the criminal mind will always evolve and devise new ways to infiltrate and gain access to new victims. That being said Im glad Ronda saw what she recognized was wrong and did not clam up due to outside pressure. I dont know if I could stand up like that, I mean I do everyday, but I have that badge which makes a huge difference because Im used to being unpopular in the criminal world so I dont get the outside coercion and if I do I relish in it cause I know I am doing right. I hope Ronda feels the same.