Blogs are for old people 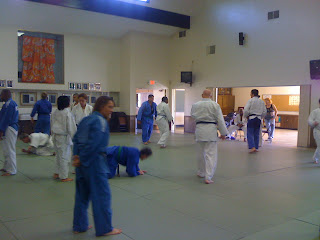 Blogs are for old people. Email is for old people, too. So my children tell me. This would bother me except for the fact that I realize I actually AM an old person.

If there are any secrets to happiness, I am sure that one of them must be to quote the Delphi Oracle, "Know thyself."

Old people like to pontificate. Although I like twitter, it is difficult to wax philosophical in 140 characters or less. The communication many young people have does concern me, and I count young as anyone under 30. (The fact that I remember when the slogan was "Don't trust anyone over 30" is further proof of the fact that I am old.)

My latest philosophical revelation came tonight looking around at practice. I realized that Sawtelle is a recreational judo club. When this occurred to me, I felt perfectly satisfied because my daughter, Julia, is a member of Sawtelle and she is ten years old, which is a perfectly appropriate age for recreation. Because Kenji realizes that his job is to help kids in elementary school be in better physical health, develop skills such as public speaking when they explain a technique and problem-solving when they figure out why it doesn't work, he has a large and growing junior program. He knows what he is doing.

I have stolen a page from his book working with the players at the West Coast Judo Training Center. This year, I wanted them to win some regional tournaments, the state championships, junior nationals, ladders and national brown belt championships. Those were all stepping stones for them on the way up. They won a ton of gold medals, from the California state championships to junior nationals to the Ocean State International to the Golden State Open - just everywhere we aimed for to win this year, they won. 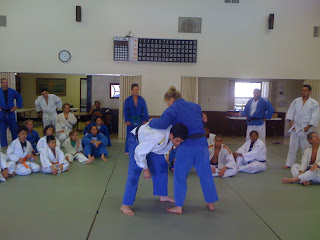 My goal for this year was not to recruit a lot of players from other places and pretend to be an Olympic training center on the west coast. We have plenty of people trying to do that already, all over the country, and they are pretty much all failing at it. You don't have an Olympic program with ten-year-olds and eighteen-year-olds who have only been in judo four years. What we do have at the West Coast Training Center is time. We have time to teach technique. We have time for extra rounds of randori, individual instruction, visiting other dojos. I said before that the benefit the coaches' kids have is all of that extra time. Well, now Gary, Ronda, Tony and I, along with a lot of help by people like Sarko Balian, Bill Caldwell, Blinky Elizalde and others are trying to give this advantage to other players.

Everyone wants to coach Ronda or "the next Ronda". Me, I want to develop 20 more Rondas. (I would normally say that I also want Ronda to do the dishes, but since she split the cost of a cleaning lady with me today, the dishes are done and I am happy.)

The best bet I know for producing 20 more Rondas is providing the same program I did for the first one, which actually includes a lot of judo practices at different places, meeting new kids, trying new techniques and getting pushed to go on to a higher level only when she was ready to win at it.

I also want Julia to have a good time at judo, which is why even though I notice that when she is doing randori with Hunter or Saki or Francis she is talking as much as she attacks, I ignore it. I know the difference between an Olympic athlete and a ten-year-old. If we had fewer coaches pretending they were coaching the Olympic team when what they are really coaching are ten-year-olds, developing teenagers and older adults who just want to socialize with exercise judo would grow in both quantity and quality.

Whether you are an old person with a blog, a judo coach with a recreational club or a ten-year-old, be yourself. You're probably good at that.

Here is a simple drill. Do ten repetitions of your favorite mat move. Do it right-sided. On the first one, try to do it as technically perfect as possible. The second one, try to do just as perfect but a little faster. Keep this up trying to make each repetition faster than the last one. Repeat on the left side. Now do it again with a second mat technique.
Posted by Dr. AnnMaria at 11:02 PM

Ciao AnnMaria,wich age you start to teach shime waza and kansetsu waza and when they can do that in competitions?greetings from Milan Ric

I start to teach shime waza at age 12 - the year before they can do it in competition.

I start to teach kansetsu waza at age 13, the year before they can do it in competition at the high school nationals.