Jerry Hays sent me a link to a cool site that has Billy Joel's song, "We didn't start the fire" with photos of nearly everything mentioned, from Doris Day to the Suez Canal to Bob Dylan to the Ayatollah Khomeini. It is a good reminder of the balance I always seek - and seldom find - in my life.

If you look at the pictures, they pretty much flash through political events, major news stories (not always the same thing - think the O.J. Simpson trial versus the war in Afghanistan), literary giants, such as Hemingway, popular films and who won the World Series. All of these snapshots represent a huge event to millions of people, and were defining events of their era. 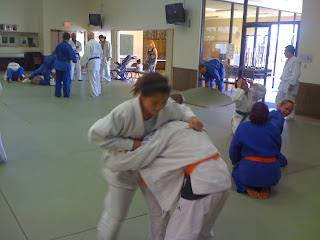 I realize that, by comparison, whether one particular little orange belt learned to do a sacrifice technique correctly is not a life-changing event. On the other hand, most people's lives are determined by thousands of non-life-changing events piled on top of one another. Whether you did your homework for a thousand different nights is a huge factor in making it into Harvard. Whether you came to practice a thousand different days determines who goes to the Olympics and who stays home. Whether an adult thought you were important enough to spend five minutes teaching you 10,000 times over your childhood determines who wins the Nobel Prize and who is the Prison Inmate of the Month. So, I try to balance not taking what I do too seriously and not taking it too lightly. As I have said before, coaching in general, and probably judo in particular, a good coach needs to be smart enough to do it well and dumb enough to believe it's important.

Speaking of judo ... it was another great judo weekend in sunny southern California. First, we had practice at San Shi from 10-11:30, then from 1-4. After that, Tony Comfort took a group to the beach where they played football until it was dark. After dinner, everyone went back to the hotel for swimming, ping pong and meeting up with friends. Let me take this opportunity to point out that Tony got lost every single place we went.

After sleeping like a collection of rocks, we headed up to Temecula. The positive part of Sunday practice was that it was a really scenic drive. The downside was it was much farther than we had believe and so we all ended up there about half an hour late, with the exception of Tony who got lost yet again and was so late he gave up and went home! 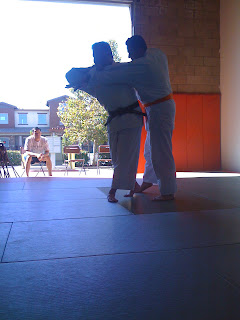 Their dojo is really cool. The side of it opens up, so on a warm day like today, it is almost like working out outside. Julia got some really good pictures of Paul Nogaki teaching uchimata. I thought the lighting effect was pretty cool.

If you are ever in Temecula, you should definitely stop in and see their judo club. They were unbelievably nice. Not only did they invite us to their dojo, and did Paul teach his signature uchi mata, but they barbecued hamburgers for us afterward. Who says there's no such thing as a free lunch.

So, let's add it all up - 7 1/2 hours of judo practice, football, swimming, barbecue, dinner and the Sheraton Resort. Getting back to work on Monday is going to be very relaxing. 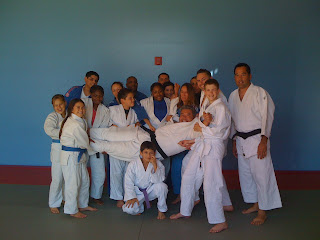 Hello Dr. Annamaria! Thanks for coming down to San Shi to train with us. It was a lot of fun working with you, Rhonda, Sensei Tony, Julia, Harmik, and all the other cool judoka! We had a blast playing football at the beach with Tony and the gang! Julia and Maya made the only catches and showed up the boys! We are looking forward to seeing you all again soon.

Glad you had fun. You are one tough judo player, Kai! I know our guys all had fun working out with new people.

I look forward to seeing you all again in December (unless Tony finds out I made fun of him on my blog and kills me -- shh, don't tell!)

Hey this is a great blog and very insightful! I really enojoyed the pics of the convertible dojo! Please check out my blog when you have some time. www.themmazone.net/Martial-Arts-WP/
Thanks,
Tony