If I'd Known You Wanted a Dead Porcupine

(Note to judo people: this post has nothing to do with judo other than having Ronda's name in it, I just happened to remember this today.)

Ronda has the habit of falling in love with animals that turn out to be high maintenance. As with anything that is less than perfect about any of my children, I blame their father. When Ronda was about three, her father bought her a hunting dog. One might wonder why a three-year-old would need a hunting dog. I was quite suspicious of his motivations, since Ron was big into hunting, but this was the same man who bought the children not one, but two ponies even though our combined knowledge of anything related was that we could both spell "horse".

Spunky, the dog, was actually brilliant when it came to pointing out birds, which was what pointers do. Unfortunately, as a sentient creature, she was a miserable failure. Two of our dogs tried to bite a porcupine exactly once each, got a mouthful of quills and thought to themselves in dog language,

and never tried it again.

Not so, Spunky. Back then, I was working a LOT of hours, writing grants, lectures for my new classes, articles for academic journals. By the time I picked all three girls up from day care and pulled up to our not so little house on the prairie, it had been dark for hours and I was ready to just sit down for five minutes. But, no, up would come Spunky with porcupine quills all over her face. I'd have to grab her, wrestle her to the floor in the kitchen, because it was 40 below zero outside and I was NOT going to be outside one second longer than possible. With a pair of pliers, I would pull the quills out one by one, blood dripping on the floor, swearing I was going to kill the damn dog while Ronnie would be hollering,

Where was the dog-buying, hunting father in all of this? Usually away on business. Did I mention that my husband was an amazingly good shot? This is relevant because one night he was actually home and I hear the dog barking outside. I know she is after another porcupine. I shake him and tell him that if he doesn't get up and shoot that damn porcupine, I will.

Since he doesn't get up, I throw on the first thing handy, which happens to be a long red dress, grab Ron's magnum and go out to the bush where the dog is barking. I think about shooting into it but then I am worried by the slim chance that it could be the neighbor's cat. I've read porcupines are pretty slow, so I figure I'll shoot over the bush to scare the thing and if it is a porcupine, when it comes lumbering out, I'll shoot it.

Well, I shoot over the bush and I do not know what the normal pace of a porcupine is but I can tell you from personal experience that when you shoot at them they move like a bat out of hell. So, I shoot again and miss, I notice the damn dog has porcupine quills in its face, and by now I am really pissed. I go back in the house and push Ron out of bed and tell him to go get that damn porcupine. He says,

"I never argue with a lady in a red dress holding my gun.

By now, all three girls are up and they are insisting they are going four-wheeling with daddy, too. So we hop in the truck, throw the stupid dog in, drive around the country until it starts barking, Ron gets out and shoots the porcupine. Then, we all go back to bed and get up and go to work and school in the morning.

I am telling my class about the great porcupine adventure the next morning when one of the students in the back of the room raises her hand and asks,

"Um, Dr. Rousey, what did you do with the porcupine?"

I tell her that, not having any particular uses for a dead porcupine, I left it right there. She asks me if she could have it, explaining that she is sewing a dress for her daughter to dance at the pow-wow and porcupine quills are hard to come by. Since I am a new young professor and want to be friends with all my students, I say sure.

Next topic: How does one carry a porcupine?

Having come from the city and moved out in the country in North Dakota, I take a lot of walks in the fields, to the great amusement of my neighbor, who is an actual farmer and who clearly regards our entire family as three steps over the line from crazy. A couple of times, he has seen me out walking and the conversation went like this:

And he would walk away shaking his head.

I came up with the idea of carrying the porcupine in a broken suitcase. As I was walking through the field, I sincerely hoped I did not meet my neighbor. At first, I thought he would think I was even crazier than usual if I had to explain I was just going for a walk with an empty suitcase. Then, I realized, it would be even more difficult to come up with any rationale for walking around a field in North Dakota carrying a suitcase full of dead porcupine.

The next day, I deliver porcupine, suitcase and all and that was the end of that saga - for about three days until my friend, Vivian, comes into my office and demands to know if it is true that I gave a porcupine to someone else. She is a bit put out because she is making a dress for her daughter for the pow-wow, too, and she could have used some porcupine quills and she is my friend after all, where I had just gone and given it to some random student and how could I have done that.

In yet another of those moments in my life of I-never-thought-I'd-have-to-say-this-but , I responded,

"Honest to God, if I'd known you wanted a dead porcupine, you would have been first on my list." 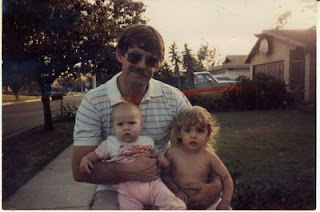 In the end, Spunky and Ron partnered to contribute to the demise of several porcupines and the beautification of several Native American little girls' dresses. After they had cleared out all the porcupines in the vicinity, one day Spunky goes and bites through the neighbor's barb wire fence and comes home with barbed wire stuck in her face and I have to take her to the vet for that. She really was one stupid dog.
Posted by Dr. AnnMaria at 12:12 AM

I recently came accross your blog and have been reading along. I thought I would leave my first comment. I dont know what to say except that I have enjoyed reading. Nice blog. I will keep visiting this blog very often.

Another good story to start off my day. Thanks for making us all laugh and somehow forget about judo for a bit...

Your husband looks like my dad did back then. My dad had those glasses, the stache, and I swear he had that shirt to.

Priceless. This post was exactly what I needed today. ;)

Thanks for the giggle!