Cliff hangers, west coast and where the development money goes 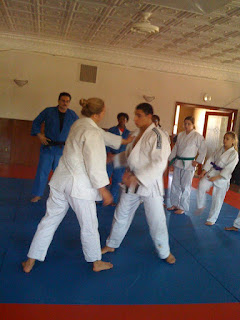 Ronda was teaching at the training center today. She did two hours on gripping. I thought of putting some video clips here, but since she is coming back to competition shortly, I thought better of putting up video of her doing drills. Even though it was kind of short notice with her filling in for her gimpy mother, we had people from Kouhaku, LACC, Sawtelle, Mojica, Hayastan and Guerreros show up.

The Garcias did not get the email and when Gary called them, they dropped what they were doing and came over. I thought that was pretty cool.

The training center is doing exactly what it was meant to do - bringing people from different clubs together. It is a new concept, to have people from the different dojos regularly get together to share what they know. It was GREAT to see Blinky working with Erin and Julia. I was sorry Julia could not be there next weekend as she took off for science camp after practice.

We have had several people ask where the USJA development funds go. A significant amount - $4,800 a year ago for mats and crash pads, and over $3,000 this year for camps, clinics and the national novice and brown belt championships go to support the training center. This is a very cost effective way to support judo. On Saturdays we usually have 15-25 people show up, occasionally a few more. On Sundays, it is usually more like a dozen. This is about 60 practices a year. Those people who attend often are funded partially to camps and clinics. If you think that having an extra dozen people show up at a camp or clinic helps the event break even and makes a better event, then you'll agree the funds are well-spent. Why does money go to the training center and to these specific events for people from the training center? Because it is given as a 'directed donation'. We have had several people give us hundreds or over a thousand dollars for this specific program. It is a USJA/ USJF joint program and last year the USJF gave $2,400 for mats. Dr. Jim Lally, now a USJA board member, donated around $1,500 for mats. A directed donation, by the way, is when a donor gives money for a specific purpose.

Ronda is running practice next Saturday also. Same time as usual 10-11:30 and 1-4
I will be in Arkansas.

Speaking of Ronda, note to young people: NO story you ever tell that ends with "and then I fell off a cliff", will meet with your mother's approval no matter WHAT else happened.

For the person who emailed me and asked which of my children fell off a cliff, I can only say, if you know me well enough to know my email it should be obvious - which one do you think?

========== REQUIRED judo tip ====
Control the shoulder. If I am a right-handed player, I am going to turn my right shoulder to do any hip or hand technique. My shoulders have to go forward to do backward foot techniques. Start your grip by planting (and I do mean planting) your left hand on my right shoulder.

And yes I did steal that from watching Ronda teach gripping today. What of it?
Posted by Dr. AnnMaria at 9:45 PM

I learned that from Jimmy's Grip Like a World Champion! I do so enjoy reading your blog and learning from it!

Thanks, Loren.
Hope all is well in New Mexico.