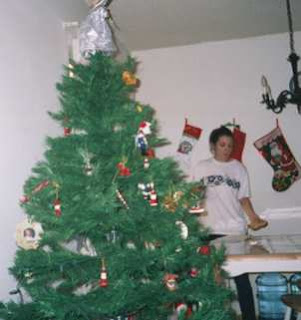 We were putting up the Christmas tree, nailing lights around the windows outside, playing Christmas songs, hanging ornaments - when I found the whip. It was a leather bullwhip packed in with the Christmas ornaments. I was about to yell at everyone in sight but then I remembered Christmas last year I had done the exact same thing.

"What the hell is this? Let me tell you, there is nothing you could do with a leather whip that is mother-approved in this house!"

Jennifer responded,
"Why do you look at me? Just because I lived in San Francisco for several years doesn't mean I am into S & M. It doesn't mean I am a wicca-practicing lesbian either, although I know that is what all you people in this house secretly think. Why don't you ever blame Ronda for anything?"

[Let it be noted that Jennifer took down the crucifix in the living room to put up a Christmas stocking, so wicca or not, she comes in first or second on my vote of family member most likely to go to hell. It is a close race with Dennis who encouraged her saying that having the cross up was tantamount with taunting the baby Jesus with 'You're going to die.' I am pretty sure they are both going to hell. ]

Suddenly, one of the older sisters remembered,
"Oh, yes, that is Ronda's whip."

Ronda defended herself,
"You're lying. I get calls all the time from creepy perverts wanting me to beat them up. That's disgusting! I don't have any whips. You guys are just trying to get me in trouble."
[It should be noted that Ronda complains that I put things in quotes when it was not exactly what she said. Oh well. It's not like I roam the house with a tape recorder.]

The sister (I don't remember which one it was) persisted,

At this point Ronda muttered, "I hate you" and there may have been some Christmas cookies thrown at the offending sister (in the interest of strict accuracy, it may have been an ornament, cinnamon bun or other non-lethal missile) who continued,

"And we gave it to Venice Dojo for the trophy case but we didn't think that the leather whip quite fit in with the family vibe at Venice so we took it off of there. And it must have been around the time of the Christmas party so the whip got left with the ornaments."

So, I remembered all of this and having accomplished the Christmas tradition of suspecting one of my daughters of harboring secret sadomasochistic tendencies, packed the whip back with the ornaments (apparently, that's where it goes now) and went out into the kitchen for more Christmas cookies.

This is one of the benefits/ drawbacks of getting old. You have the same experiences over and over because you forget that you had them before.
Posted by Dr. AnnMaria at 9:15 PM

LOL!!! That is the funniest post you have put up to date and I have read all of your blogs. No, I am not a stalker, but I enjoy your insight and a great laugh anytime. Merry Christmas, sensei and may all the judoka under your guidance grow beyond belief. Adrian