Why Anna Seck is Cool 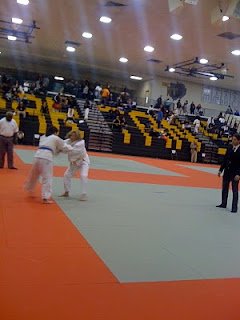 Two weeks ago at the Winter Nationals, Joan Love had flown all the way from Connecticut to compete in the women's masters division. There was no one for her to play. Anna Seck, despite having refereed all day for two days, having to give up a fair bit of weight and not having trained for the tournament at all decided that she would borrow my gi and compete to give Joan a couple of matches. To be fair to Joan, she IS quite a bit older than Anna, but, on the other hand, she knew she was going to compete and had been training, so she had somewhat of an advantage.

Anna got in some really good attacks, including a couple of nice seoi nages, but in the end, Joan won.

So, why is Anna so cool?

First of all, there is that whole mutual benefit and welfare thing which so many people espouse but so few people embody. How many of YOU would have gotten out there and fought just to give the other person the chance to compete.

Most people would have a hundred excuses - I'm not in shape, I came here to referee, my back hurts. Anna just got out and did it.

More than getting injured, most people are afraid of the snarky comments they will hear afterwards - oh that wasn't such a great attack, your technique isn't strong enough (whatever the hell THAT means). I think facing that takes more bravery for most people than the actual physical act of competing.

I DO think referees should compete. The best referees, like Hayward Nishioka and Martin Bregman were all competitors and they competed for a LONG time, not just in their twenties. Hayward first placed in the nationals before I was born and was still competing in the senior nationals 20 years later when I first won. Martin competed in the masters divisions until he had to replace body parts. If you don't go out there and compete you don't really understand the tempo of the match, and you don't empathize with the emotion when you feel you are unfairly treated.

People like Anna get out there and DO it.

When Ronda competes at tournaments like the Winter Nationals it is easy for her. She knows she is going to win, she knows everyone is going to praise her and while she is fine with the fact that it benefits her opponents, too, she is doing it for HER, to help herself get back in the game.

For Anna, she doesn't know if she is going to win or not, she knows if she doesn't some people will talk trash (because some people are morons) and she was doing it to help someone else get better.

So, that is why Anna wins my prize for way cool which carries with it 1,000,000 beanie points renewable at any West Coast Judo Training Center practice. [You can redeem your beanie points to select a random word and make everyone shout it out whenever you feel like it and for other valuable prizes which I have not thought of yet.]
Posted by Dr. AnnMaria at 12:18 AM

It is rather interesting for me to read the article. Thank you for it. I like such topics and everything that is connected to this matter. I definitely want to read more soon.