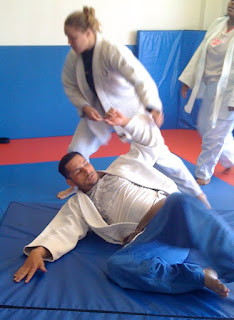 Okay, I admit it. That title was false advertising. First of all, Will Dampier, the vanquisher of Groundhog-Day is not actually a superhero but an administrator at a well-respected research university, which I can guarantee you is not at all very similar to super-hero-dom . (Sorry, Will, but it's true).

He is, however, in Pennsylvania, the same state as the famous groundhog, so that should count for something.

To the right is neither Will (the blonde hair in a bun probably tipped you off) nor a groundhog being defeated. It is actually Sam Garcia being thrown by Ronda during practice last week at the West Coast Judo Training Center. I wanted to include another ground hog picture but Dennis said no, I had already used my quota of photos of obese rodents for a blog for the first quarter of 2010. I think he's lying. I don't believe there is such a quota! But I'm not taking any chances.

Will sent me the following email, along with some nice comments.

" I've been following your judo blog and I really support all of the work you've done for USJA and judo as a whole ... After reading your post about "groundhog judo practices" I sat down and thought about a game that I can run to spice things up.


At the club I run in Drexel University  we have ~40 college students that come to most practices and the randori sessions get extremely predictable ... the same people use the same techniques and lose or win against the same people.


So my new game ... I call it "bag of tricks randori" ... its basically king-of-the-hill randori with extra rules:


Before class I made folded pieces of paper with the following things written on each of them:
no te-waza
no ashi-waza
ashi-waza only
ne-waza only
sutemi-waza only
hidari waza only
migi waza only
no counters
etc.
So I just run king of the hill (winner stays in) but when the new person comes in they pick piece of paper out the hat and then those are the rules for that match. Violating the rules is a DQ ... although I usually give people the benefit of the doubt if it's questionable.


I also put in a few that are labeled 'kiken gachi' and if someone pulls this out of the hat then they automatically win and are the new king. It works well if you have one or two people who are too far above the rest of the class for fair fights.


If you have any suggestions or comments I'd love to hear it. Feel free to post this on your blog if your interested :)

This is cool for three reasons:

Will is in contrast to some of the people who write me and tell me how much I suck because they sent me an email 24 hours ago and I haven't answered yet to tell them why their cousin's uncle's wife's twin brother didn't get his ju-ichi-dan. What do these people think when they send me those emails? That I will say,
"You are right, I suck.  I will endeavor to suck no more."

Well, maybe I do and maybe I don't (for the record, I think I don't), but I do know that people like Will are the reason I continue doing what I do for judo and the USJA.
Posted by Dr. AnnMaria at 10:55 PM

We've been doing something very similar for close to a year now, except we call it "Bruce Lee".

Take a look at any B-level chop-socky flick and you can probably already get the gist of this particular drill. A single Judoka is in the middle of the tatami, with five or six students forming a wide circle around them. Whoever is leading that nights session then whispers a technique to the students surrounding the lone one.

If you can take out "Bruce", you then take his/her place and continue on. The thing is, there are no breaks for the 20-30 minutes we do this. It's a continous rotation.

It simulates a high intensity match and is a grueling, soul-stealing drill.

The poker chips are a great idea, I'll definitely be passing that on!

Glad I can be of help, both mentally and "bloggerly" :) ... If you're ever out in the land of groundhogs I'd love to buy you a drink for all the help you've given judo :)

i very much adore your own writing choice, very attractive,
don't give up as well as keep posting due to the fact that it simply nicely to read it.
looking forward to find out much of your current article content, have a pleasant day!