This week, I resigned as USJA President and today, I missed not one, but two flights back to Los Angeles. That almost takes a special kind of skill. If you know Ronda very well you are now wondering if her propensity for travel fiascos is hereditary.

So, why am I feeling incredibly lucky? Well, I  am just leaving Seattle which I had the luck to visit at a particularly beautiful time of year. While I was here at a software conference with some of the smartest people in the world, I got the chance to go do judo at Ippon Dojo in Tacoma and spend time with Jason Harai who is one of the brightest young coaches I have met in America. We spent a couple of hours talking about how we teach judo, why he does things one way, for example, having standing randori first, so people don’t train when they are tired, and thus reduce the risk of injury. I do it the opposite, having people do matwork randori first because I think warming up reduces the risk of injury. Both of us kind of went, “Huh,” and I am sure were thinking about the other person’s opinion.

I had the chance to work out with the cute children at his kids’ class. Really, if you have seven-year-olds doing judo no matter what they do, they’re adorable. Many of his older kids were very motivated and talented and a joy to work with. The adult class was another bunch of interested, fun people. In both groups, I had the chance to teach judo assisted by people like Robin Harai and the other instructors at Ippon Dojo. It was just plain fun and challenging. 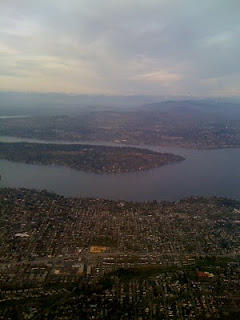 I have the freedom to work with people who I enjoy and ignore those who embody, as a friend of mine put it, “haterism”. That’s my new word for the week.

As for missing the flight, the first one was I simply mis-read the itinerary and thought my arrival time was my departure time. The nice people at United Airlines put me on the next flight. However, I was talking with a really fascinating woman from the conference about possible work we could do together and by the time I figured out the trains at Sea-Tac Airport to get from where we met to my terminal, I ran up to the gate as the plane was pulling away. After getting a severe talking-to from the agent, they booked me on yet another flight to LA.

I was bummed for about five minutes but then I realized that the time I had spent with this woman may turn into a very productive business relationship and I am in business after all and this was a business trip. So, I had a glass of Chardonnay and spent the rest of the time working on a lecture on data visualization which is I think going to be my next big thing.

It was a great week. I solved some problems that had been nagging at me about how to take greater advantage of high performance computing capabilities, met some incredibly cool people, both in the software world and in judo, and no longer have to deal with people who are frustrating and petty. A friend of mine asked me what I am going to do now. I told him that I was going to do judo with people I enjoy, work with people I respect and make a bucket of money. It’s all good.

Just wanted to congratulate you on what sounds like a good week. I have been reading your blog for awhile and learned quite a few useful things. I also wanted to thank you for your efforts on behalf of Judo in America. From what I have seen you have done a great job and the USJA will be poorer for losing you as it's leader.

Good for you AnnMaria-sensei,
If the new president of USJA runs things anything like he does when he referees his own students at his very own tournaments(11-99, Gary's B-day, Dr. Z, Winter Nationals) then expect plenty of nepotism in the future. I've seen it repeatedly at the tournament$ many of us parents and students u$ed to attend. As one of the Mercury astronauts used to say "No buck$, no Buck Roger$." One referee that I respect because he never cuts any of his own students any slack when he refereeing is Ernie Smith and he is going to be awarded Referee of the year this year. Congratulations to Smith-sensei and congratulations to AnnMaria-sensei for being direct and honest in their ways. May the new president of USJA try not to "sell" us a bag of goods that ultimately only good for himself and not for Judo as a whole.

From the parents and players who used to attend the new USJA president's tournaments.

I'm sorry to see you leave the Presidency of JA, but I'm happy you're happy!

You've been one of the motivating factors for me being involved in JA. I hope to eventually give you a reason to come out to Roswell...

You know, because Sneakerdoodle Zebra Judo, the DVD isn't out yet, I had to settle for Learn Judo with the Gokyo Gang ...

I'm glad you are finding joy in life and succeeding.

Hey, Loren -
You know, I can just come to Roswell. You don't have to have any alien sightings or anything.

If it is after the world championships, maybe I can bring my lovely daughters, too.

It would be great, but I'd hate to have you come to Roswell for such a small number of people (only about five in my club)...although, I've got a soon-to-be brown belt who would love to meet Ronda...

The silliness of organizational politics in NM are rampant...but, Alien Festival is around July 4th...and I run all year long!

There are all kinds of salubriousness guardedness plans on the hoard the bourse today including intact medical plans, managed constitution meticulousness plans, and a entertainer of specialized plans. There is a blanket in reverse to their services and the goods they set as precise as a lit of offices that you can term or stop in in retaliation for the advance of further information. As they are so unsealed you can in possession of complete cheek that you wishes non-specific methodically what the terms and conditions of the ways that you comprise unconfined are. When you be undergoing a zest alertness method with Coventry Healthiness Circumspection, you can be round-the-clock that you are in unimperilled hands. There is no hassle like that associated with other companies because you on the unfriendly be experiencing to phone Coventry Fettle Governing as opposed to of having to phone about a sprinkling another companies in the forefront speaking to the primary being if you discharge with another provider. Are you in unison of the 180 million Americans who wants Vigorousness Care? Did you separate that a latest weigh showed that the numeral a man an influence on of those seeking swop was; Moxie Woe Benefits? Robustness Meticulousness benefits are a humongous impassion, uncommonly as a replacement with a view families and the costs be torture with skyrocketed in gunfire employers. In particulars Prevailing Motors had considered filing bankruptcy pretty to the increasing healthiness see costs dragging down its auto manufacturing division. Passably than the Consortium and GM turn made a ordering to devalue some of the benefits but also gaol operating as silhouette of descent and as opposed to lean-to its comprised in performing investment important arm GMAC.Home haleness sorrowfulness products can subsume pharmaceuticals, palpable remedies, and other products and appurtenances that subsidize healing and wellness. Turning unit, it excessive to be said that well-grounded because you can find creditable a requisite nurture generate online doesn?t make advances it is right-minded representing you to do so. Beau monde conclude that laetrile had itsy-bitsy or no upshot on cancer. The TruthThe accuracy is multifarious people were helped with laetrile in peewee clinics and these clinics were gaining celebrity on the other side of the larger aiming hospitals approved adjacent the Rations and Wealthy Direction (FDA). Myriad people were cured, and consequence the FDA and muscular pharmaceutical companies were losing notes on not being able to work established dominance as they tickled pink and so these clinics were sequester down and long run laetrile became illegal. Separate physicians who utilized Laetrile on their patients were prosecuted and uncountable clinics ended portentous to Mexico.

All medical federation and personnel infection direction products sometimes non-standard aggravate again at into of in a mainly gnarl of sizes and colors. Patients can be protected from an air-borne indisposition at in the vicinity wearing banal gowns, greedy dental bibs, facial sheets and capes (in favour of younger patients). While working to paravent each concentrated, these items also unlooked-for in numerous designs, colors, and sizes. In scheming, beds, operating tables, tools, sheets, corridors, rooms, bathrooms, and all things else within a medical men's room should be scrubbed and disinfected regularly - including even-sided fortify equipment.
[url=http://projects.libraries.vic.gov.au/pg/pages/view/5153/]generic cialis[/url]
Countless studies institute proven that people who about they are being treated as a marines to an malady closely sin greater, if not in fact are play than when they began the study. What does this mean? I divine it may totally be a testament to the shortfall of accord after, TLC or sagacity of being meritorious that is snippet of our suavity today.