What Exactly is Success, Anyway? 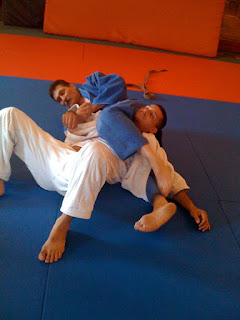 What is success? Is that a silly question? When I teach about program evaluation one of the examples I use is the Head Start program in America. This program for children aged three through five years old was originally conceived in the 1960s as a means of raising children's IQs. It failed. It turns out that a couple of years of a good preschool program don't raise your IQ. What they do, though, is reduce your chances of failing a grade, and since school failure is related to high school graduation, Head Start even increase the probability you will graduate from high school. It is also related to a lower risk of being placed in special education. So, most people would agree, less special education placement, less failing grades, more high school graduation = success.

Is the West Coast Training Center a success? Let's see, two years later we are still having practice every weekend, we have increased the number of talented instructors teaching, like Richard (Blinky) Elizalde, shown above. Of those who are coaching or training at the training center the following have started teaching in a new program in the two years since the training center began - Victor Ortiz, Richard Elizalde, Allen Wrench, Sam Garcia and Ronda Rousey (the middle school program starts this Friday). Tony Comfort also started a new club but he has since relocated to northern California due to his career.

If judo is to grow, we need new programs. I know that the training center was but one factor in supporting these individuals starting their own programs. Obviously, all of them learned a lot of judo from Guerreros, Goltz, Tenri, Mojica, Venice and the other clubs where they trained. Certainly Sensei Elizalde has been teaching at one venue or another for decades. I do think that the practice of getting in front of a class one, two or three times a weekend on a regular basis makes it that much easier to move into running your own program.

Ronda agreed,
"I know that without having the experience coaching at the training center I never would have volunteered to teach this middle school program. It gave me a lot of confidence as a teacher. I knew I could do it because I had done it with this group." 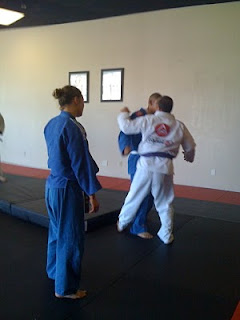 What else do we need to succeed? We need to retain more teenagers and young adults. Every club I have seen experiences a dramatic and depressing drop off in this age group. Depressing because these are the players who we have often invested eight to ten years developing and then they quit. The West Coast Training Center practices are predominantly players in the very age group that we want to keep.

We have a dramatic, disproportionate drop off in female players in this same age group. The West Coast practices are usually 40% or more female players.

Finally, we attend a lot of events out of the area as a group. While all of the players and coaches have their own clubs to support at local events sometimes when we go places such as the San Jose Buddhist or to the winter camp in San Diego we attend as a group. This builds stronger social relationships among the players (which research in sport psychology shows to be related to retention) and it is also a benefit to the event organizer that has 15 or 20 additional people show up and attend.

If success is having 100 people on the mat every day, then we haven't achieved it.

If success is, after two years, being in a permanent facility with good players who are regularly improving, with good coaches who are also branching out, then I would say the training center is a roaring success.
Posted by Dr. AnnMaria at 11:41 PM

You are an icon and a hero.

I will know, many thanks for the help in this question.

I am assured, what is it already was discussed, use search in a forum.

Excuse, I have removed this question

Success is for me, being told by one of my students that Judo got him over a bad hump created by illegal activity and drug use. Our "sentenced to the martial arts" program has served over one hundred juvenile probationers now with only four going on to an adult criminal career. No, none will make the Olympic team and they rarely compete, but a standard old school Judo workout with my coaches who enjoy "playing" Judo has become a successful juvenile court diversion program for our area! Randy Rhodes USJA Nidan Juvenile Officer