First, you collect the arm (NOT an armbar post)

I saw Gokor Chivichyan do this many years ago. He hadn't been in this country nearly as long as he has now, and his English was not perfect. Still, he had some good judo moves and someone had asked him to show a matwork move.

He started out with,

I think he meant that you trap the arm, but I thought the expression was hilarious, and I've called it that ever since. I've used this turnover to a pin for years and taught it to hundreds of people. For those of you who didn't quite get it, here are a sequence of photos we took for THE BOOK a while back.

1. First you collect the arm. Notice how Ronda has his arm trapped here. She hooked ABOVE HIS ELBOW and she has a grip on the opposite lapel of his gi. She is going to keep this grip through the whole move and never let it go. 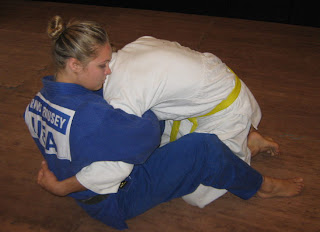 2. You sweep with the leg on the same side as the arm you have collected. You hook inside his other leg with your other leg and lift. You go directly to your side. The photo below is shown at a bit different angle so that you can see the lift with the leg, because a lot of people miss that. 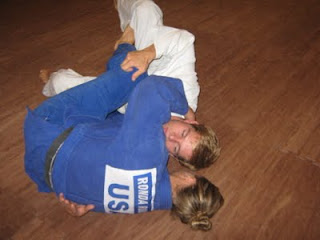 Also, notice that her arm is coming up around his head. Personally, I'd swing my arm and try to clock him in the head with my bicep to get more momentum going over.

3. Notice that she STILL has that same arm and the grip on the opposite lapel. Once she has him on his back she gets her legs over to the side and sinks her hips low to have a lower center of gravity which makes her harder to lift and roll over. She spreads her legs to give herself a stronger base. 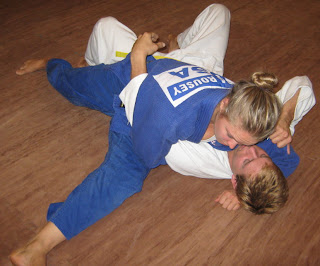 Great pictures and informative article. Thanks!

If that doesn't work the pic is here:
http://tinypic.com/r/2jdf5dv/7

That is the awesomest poster ever!!!

@AnnMaria - any possibility of a video clip on that turnover?

That's a good idea, Loren. I'll see what I can do for a video clip

Have you thought about a youtube channel that would go with the book? You do not need a video of everything, but there are definitively some techniques that are much easier to understand by watching a video than to try to figure them out through images. At the same time you might not want to have a complete DVD to go with the book just for the few techniques that would require the videos.
Just launching the idea. Good luck with the writing.

It's funny you would say that Jorge. Ronda and I were just talking about that a few days ago - having a companion web page, like a lot of textbooks do, that you could use a key in the book to access.

Your site is amazing.

I think a video series to accompany the book or just your matwork in general is an amazing idea! I would definitely watch and subscribe. Your transitions are incredible. I've worked in the dojo from your blogs and pictures and a video would help so much.