Jim told me that I could not use The Lego Theory of matwork because we were not writing a book for ten-year-olds (boo!). As much of it pains me to agree with him, I have to say I do like his new title for this chapter, "Matwork Connections".

He said some really good stuff about everything connecting to everything else which I wrote down and lost somewhere in the house. Hopefully, I find it while cleaning tomorrow.

Here is yet another example of a matwork connection. First, you collect the arm. You roll on top into what judo players call tate shiho gatame and what people in jiu-jitsu and mixed martial arts call a mount.

If you were Ronda in a match, at this point you would punch the person in the face. 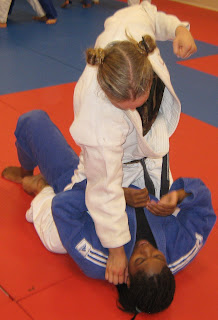 Let's say you're not Ronda, though and you're not in mixed martial arts. Suppose you are me and you are in judo. Then, at this point you would go straight into the pin. 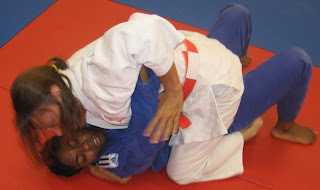 You may wish to connect something to this pin, say, another pin and a choke. So, I push her arm across her face. I clasp my hands together so that I am now pinning and choking her. 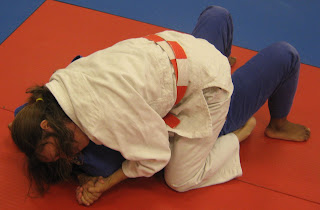 Just because I think this pin and choke combination is not quite painful enough, I am going to move my legs so that I can use my body weight to put more pressure on the choke. 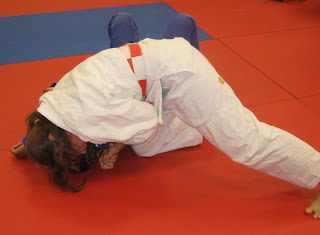 Notice two things in the photo above. First, I have my hands clasped tight together to put pressure on her neck. Second, I am up on my toes putting all of my weight on to her head.  Even really tough people will become distracted when you almost (or actually) dislocate their jaw, and not focus so much on escaping from the pin.
Posted by Dr. AnnMaria at 9:21 PM