Today was AWESOME!!! (Despite the lack of a jiu-jitsu song)

One of the greatest things about living in southern California if you are in martial arts is that people who are legends can just wander in off the street and work out with you. 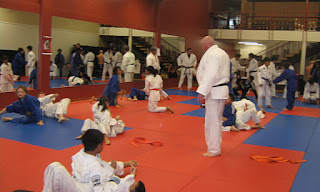 Today was the Grand Opening of the West Coast Judo Training Center at our new location, which is about twice the size of the old place. It's a good thing, too, because a whole lot of people showed up for practice today from Barstow, San Diego, Santa Monica, El Centro, San Gabriel and a bunch of cities out in San Bernardino county. 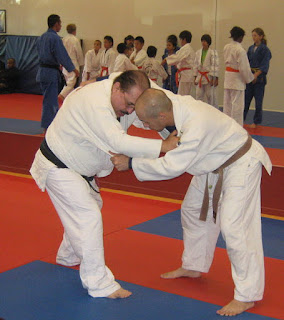 Dr. Jake Flores, head coach for many years at San Shi Dojo in San Diego and father and coach to world team members Justin Flores and Jacob Flores, Jr. just happened to find the time to stop by between seeing patients to teach gripping. 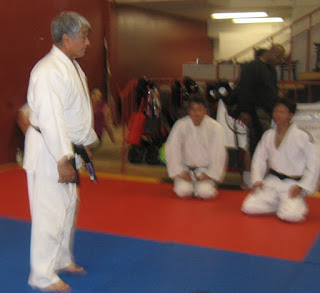 Then there were other people who are too young to be legendary but are just really, really good teachers. Victor Ortiz did a phenomenal job teaching shoulder throws and foot techniques to our younger players. Blinky Elizalde, who has been in several Olympic Trials, a member of the U.S. team back in the day and taught judo for well over thirty years helped everyone with their ko uchi gari (and some of you really needed it - I've seen you try to throw). Gary Butts taught no-gi techniques, assisted by demonstrations from the inimitable Crystal Butts. (As Gary would say - "inimitable, those of you who went to public schools, look it up!") Tom Reusling taught jiu-jitsu. 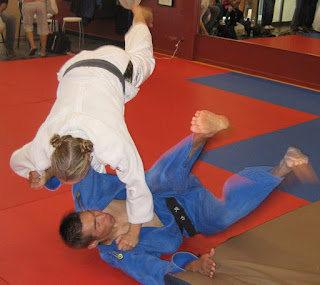 I was particularly proud of Ronda, and not just because I am her mom. I see a lot of younger athletes and athletes newly-retired from judo competition who have a complete "What's in it for me?" attitude. You will never see them do a camp or clinic unless there is a fat paycheck involved. Now, Ronda does mixed martial arts professionally and she does charge a fair bit for teaching and private lessons. She has a fight coming up in six weeks. However, she also has known a lot of the people who teach or train at the training center for over half of her life. After working out for several hours this morning, she drove well over an hour to get to the training center and then taught for twice as long as she had been scheduled because there were some people who wanted her to show specific techniques.

She even taught a choke and sang a song. I would like to take this opportunity to point out that Tom Reusling had an entire twenty minutes advance notice to come up with a jiu-jitsu song and he failed. We trust that he will be working on correcting this lapse. I once suggested to Gary Butts that he come up with a no-gi grappling song. His response is not printable in a family blog but if you have met him you can imagine it.

I'm not sure how much those kids really wanted to see Ronda demonstrate o soto gari again and how much they were just amused by her continually missing the crash pad. It wasn't on purpose. Honest!

Regardless of the number of songs or lack thereof, it was an awesome day. Thanks to everybody who made it that way. I did not get picture of all of the instructors teaching so I am hoping someone else did and will post them on the West Coast Judo blog or Facebook page. Yeah, I'm talking about YOU, you know who you are ... 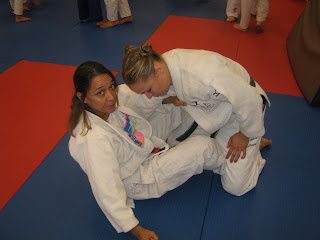 Congrats on opening your new building! Sounds like you had an amazing practice.

Times like this I regret living in BFE. Sounds like a great event with tremendous learning opportunities.

BFE - you are hilarious. I never hear anyone use that term except my friend, Laura, and she lives in St. Peters, MO, so it is completely understandable