Previously here, on many occasions, I covered the "Collect the Arm" move. I also talked about the Lego Theory of Judo where everything connects to everything else. Moving on ....  let's put these two ideas together. 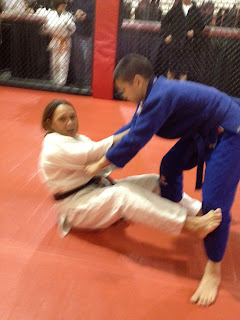 This guy makes the mistake of knocking me down. Generally at this point the person moves in and tries to pin you. If he doesn't, I'm going to pull him in anyway. 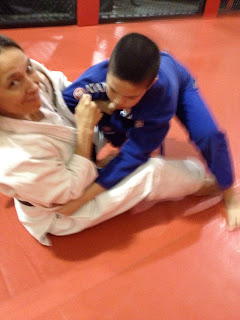 I'm going to "collect his arm", by hooking over his arm above the elbow and reaching across to take a grip on the far lapel. Ronda demonstrated the turn over from here in a previous blog. Click here if you don't remember it. (What? You didn't memorize my blog? What's wrong with you?) 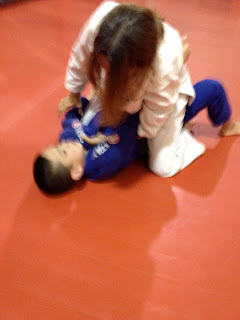 So, I have done the turnover and now I am on top. I am going to pull up with right arm, the one I had "collected" in the previous post. I may be able to put pressure on his elbow here and make him give up. Sometimes they do, but more often not. What they DO, though, is try to use that other arm to try to push me away. 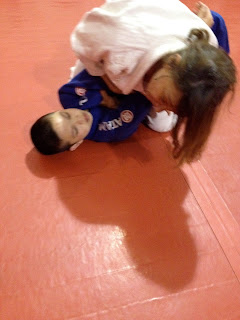 If you have one arm caught at the elbow and you are pulling up on it, you're on top of a person and your opponent has the other arm free, he is naturally going to use that arm to try to push you off the arm you are applying pressure on.  When he does, I am going to lean forward, grab the *other* arm that he is pushing with, lock it against my body and step across his head, letting go of the arm I had a minute ago. 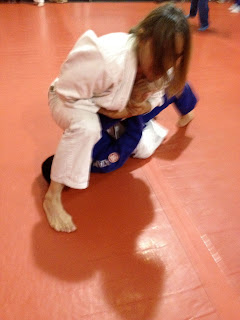 Notice how when I step across with my right leg, I come up off the floor. 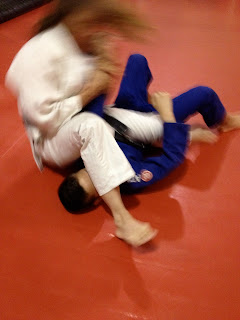 My left leg is already on the other side of his body. All I need to do at this point is hold the arm locked against my body and arch. 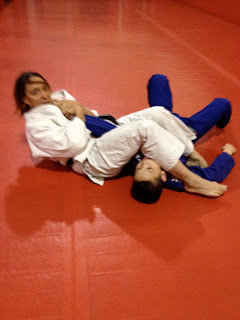 Make a note of this, I'm *NOT* going to let go of the arm I had first if the arm bar is working. That would be stupid. However, the fact is that I often don't get the first arm bar attempt. Once I have rolled the person over and I have their arm trapped, they're suspicious, trying to pull in that arm. They aren't thinking so much about the arm that I don't have.

That's why it's called the sneaky arm bar entry.

Thanks Annmaria, I pulled this off in training last night. :D

Woo-hoo. Good for you!

Weird.
You're doing that to a little boy.

I know, I know - it's all normal in the judo world. But, in the sane world it's weird.

Your arm locks and chokes make me fall in love with you!