An arm bar is not ONE technique

One of Ronda's friends who wanted to bet on her fight told me that we should not be so selfish as a family and that we should pretend Ronda might lose.

One thing that made me think Sara Kaufmann is underestimating Ronda was her comment on the media call that,

"An armbar is only one technique, though of course Ronda has multiple ways to transition into it."


An armbar is not just one technique. There are several techniques that are a bent armbar, a straight arm bar. I'd question whether a straight armbar you do with your opponent on her back and one you do when the opponent is on all fours and you hook an arm and turn toward her hips are really the same technique, even though you end up with a straight arm.

For more detail and a little set theory, check out my blog post months ago on Why armbars are hard to avoid. 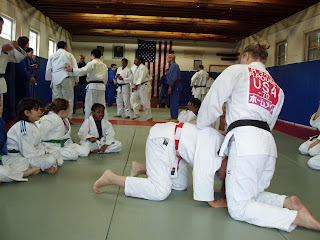 Really, to say, "She just does an arm bar" is like saying about a boxer "He just punches people," or about a judo player, "She just tries to throw people on their back"

Somehow, even though every boxer in the Olympics knew that his or her opponent "just punches people" every match I saw, both people got punched a bunch of times. Lots of judo matches, I saw people get thrown on to their backs, even though they knew the opponent was going to try to do that.

Funny how that works.

Gratz on your write up in the magazine. I hope you have many more..

What magazine? Or are you talking about my little pumpkin? Where are you these days, anyway? Acting? Stuntwork?

They did a 10 ten women in martial arts, Black Belt magazine. And they listed you.
Im doing good, I was in MI for a year. I still train, and I also was working out at Mojica's Dojo.I finishing up Call of Duty now.
When will the book be out?

Best Armbar ever was
Rowdy's on that $10 vacuum cleaner.I even LOL'd a little
louder than when i seen your
multiple armbar angles GRAPHIC
they were both priceless. The
rocket scientist must ROFLHAO
hourly.
R.D.

Best Armbar ever was
Rowdy's on that $10 vacuum cleaner.I even LOL'd a little
louder than when i seen your
multiple armbar angles GRAPHIC
they were both priceless. The
rocket scientist must ROFLHAO
hourly.
R.D.

The end result may be the same but the set ups to the arm-bars are different.