Drilling the Right Way to Win on the Ground

Those who have asked when our book, Winning on the Ground, will be available, first of all, thank you for asking. Jim and I aim to have every last thing to Black Belt Magazine by next Friday. We sent the final manuscript six weeks ago but between my business commitments and Jim being busy at a little thing called the Olympics, we didn't get the edits back to the editor yet. I had to rewrite this part of Chapter 6, which was originally called

HOW TO BE DANGEROUS ON THE MAT - IT’S ACTUAL MATH

but then we added another 8 pages of drills after this section so it didn't seem a very fitting title. Chapter 7 is Basic Matwork Drill training and has another 27 or so pages of drills.

I had written a blog post on this before where I wondered if I would be able to slip the original graphic into the book without Jim catching it.  Apparently the answer is no, because the editor had a lot of questions and Jim said,

Well, here you go, matwork connections are the secret to winning on the ground. You have several techniques that you do very well and you connect them together in ways that are a little different each time. So, if your opponent blocks your half-nelson by putting the hand out, you grab the wrist and do the wrist control series. If he is on top of you, you can “collect the arm”, go into the mount (either pin in judo or start punching in MMA), then the arm bar.  If he rolls to his stomach to escape the arm bar, go for the half-nelson.

See our nifty diagram below that illustrates why it is not as easy to avoid an arm bar as some people think. Let's just take an example using actual math and combinations and permutations, with three different techniques and the end being an arm bar. 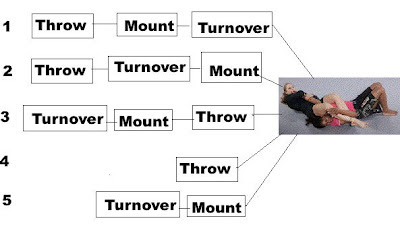 There are six permutations of any three techniques, the first three of which are shown above. A permutation is the order in which numbers occur.  So, you could throw your opponent, then do the mount and if your opponent managed to roll you over to the bottom, you could do the turnover to arm bar. That’s path number 1. You could do the throw, and if that misses, try the turnover and if that missed go into the mount and try the arm bar from there. That’s path number 2.  You could start out in the turnover - maybe your opponent missed a throw and ended up on the bottom so you went for the turnover. Then, you tried the mount, couldn’t get that, gave up, went back to standing and threw your opponent, then transitioned to the arm bar. That’s path number 3. Work it out, trust us or just go to Wikipedia and check. (There are six different permutations. http://en.wikipedia.org/wiki/Permutations - The number of permutations is n! also read as “n factorial” which in this case is 3x2x1 = 6. You’re welcome.)

One thing you will hopefully learn from this book is that you should ALWAYS learn every technique to both sides. So, you don’t actually just have six possibilities. You have twelve, because all of the first six permutations can be done to the right side or the left side.

HOWEVER, you don't have to always do all three together. You could throw and just jump into the arm bar - that’s path number 4. So, doing each one individually gives you three more options. Or you could do combinations of any two. That is why we said there were many more than five possibilities - because there are. (Didn't think you'd start delving into set theory in a book on matwork, now, did you?) In fact, because you can do the same move in a sequence more than once, there is an infinite number, but that got messy to draw. You can throw, go to the mount, roll over, try the arm bar, roll back on top in the mount.

There are two points here that explain why we are showing the same thing several different times, but each time is a little different. First, that when you train, your mat techniques should be connected, and second, if you do train the connections between techniques, you can vary those paths so that no matter which way your opponent turns it all ends up with you winning.

If you notice in that diagram above, every path has the same outcome for your opponent.

I like the new write-up, but then again, I liked the old one, too. I found nothing wrong with the original diagram, but that one is pretty cool, too.

Your understanding and application of probability,which has the effect of creating infinite opportunities for you and none for your opponent, has many implications. In a controlled environment where one can"set", permutations and following through offensively on variations of them gives tremendous advantage.

There are so many implications that a post here cannot possibly point out... But when the Gracies used the mount and guard to both limit the opponent and create a set of opportunities & permutations they could drill....like your understanding, this notion changed fighting theory as applied to the ring....prior to this time fighting in a ring was based on the observation, experience and theory that what worked in combat worked in the ring . One can see this epistemological assumption assumption in sports like boxing....which originally had much more grappling & footwork (characteristics of fighting arts) and has changed as boxers became more athletes and less fighters. For example, bigger gloves, shorter rounds,etc.

Your comments show an understanding about applying effective strategy and theory....sorry this is long winded but the application of probability, sets of scenarios and creating vis a vis while limiting the opponent is a true departure from traditional notions of combat and combat sports.

Thought by now we'd seen at
least one photo of the Rowdy
Brat armbarring the JUDOmomBRAT
lol..