How a little Catholic school ended up with Ronda's head phones

When she was a teenager on the Olympic team, someone asked Ronda if she had a super-power, what would it be, and she replied:

Losing things! I could lose things you think it would not be possible to lose. I'd be like - Death ray? Death ray? I swear, Dr. Evil, I had it right here! And that is how I would save the world.


Those of us who know her realize that is true. At her first Olympic Trials she forgot to bring a blue judo gi. She was the top seed so she would ONLY need a blue judo gi unless she lost a match. Who flies across the country to the Olympic trials, then turns to their mother in the car on the way from the airport and asks

Did you bring my blue judo gi?


Justin Flores mentioned the other day how he had picked up stuff Ronda had forgotten in hotels all around the world (they were on several U.S. judo teams together). We'd drop by their house to visit and he would go into his room and come back with

Dude, here's the thing you forgot in Egypt. And here's this stuff you left in the training camp at Montreal and ....


So... back to the head phones. Ronda had these white monster head phones she wore into the octagon for her last fight. When we all went to meet her in her dressing room afterwards, as always, Ronda forgot and left something on the floor. 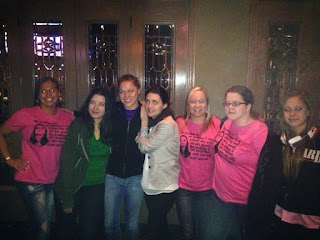 Just out of habit, her oldest sister grabbed the head phones left behind and stuffed them into her bag, meaning to give them back. Well, Ronda didn't make it to Disneyland with us and Maria missed coming by the day after when Ronda was over, so ....

Two days later she is back in Massachusetts, still jet-lagged and at her daughter's school auction planning meeting. Of course, spending the week in LA covering the fights for ESPN and then visiting with the family, she didn't have time to call around to get donations for the auction, so - she pulls the head phones out of her bag and says,

I have these headphones donated by Ronda Rousey. They were from the first women's UFC fight ever and they are the ones she wore into the octagon.


The auction committee was extremely impressed and exclaimed,

How did you ever get those?

Well, Ronda is Eva's godmother and she is very supportive of  a lot of charity efforts.


All of which, as she pointed out to me later, is completely true, so she was not lying to nice ladies at a Catholic school and also sounds better than,

I've been picking up crap she left lying around for 26 years. I can't believe it is finally actually worth something!

It does seem that absentmindedness (if that's a word) often accompanies genius ;-)

Re Lexs' comment, so does common sense (at least regarding my brother and son-in-law). Fortunately, the Rousey-De Mars Family is revealed to us as actually being human...and normal, too!

That's what I used to tell my mom when I was a kid and forgot my homework on the kitchen table.