For those who miss Sneakerdoodle Zebra Judo - and also for those who ask whether I still armbar Ronda.

It's possible this may qualify as elder abuse, since I am almost 55 years old. 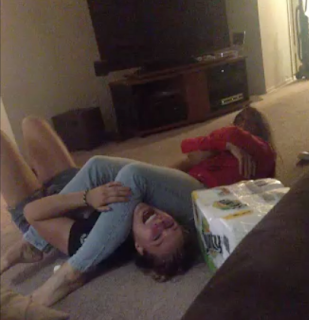 Ronda and Julia tried to argue that it was actually child abuse because Ronda is my child but they are wrong because:

It's a good thing you didn't have any boys, Ann! lol

Is this in the TUF house or did Ronda decide to stay with you for a bit? Also, does she have plans to buy her own house? I ask because I'm nosy. Don't take it personally, I'm nosy with everyone. Hahahaha

I'm nosy, too. Ask anyone and they will tell you, it's true. This is in the living room at my house. She does have plans to buy her own house but she is always too busy to do anything about it.