My fellow coach was a bit embarrassed today when I explained to the students to get the right position for an arm bar, you should pretend that the opponent's elbow is your boyfriend (or girlfriend) as the case may be. 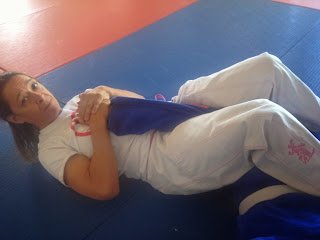 I'm not wearing a gi in this pictures so you can see the exact placement of the opponent's arm.

Once you have the arm locked in position, to break it, you make the exact same movement with your lady bits (or man parts, as the case may be) as if you really DID have your girl/boyfriend there. This will cause your opponent's elbow to bend in the opposite direction that God intended it to go and then all will be well - if we define all being well as the opponent tapping.

Now, every time I give this graphic description, people groan and say, "I can't believe you just said that."

However,  I noticed that while Blinky was saying, "Get your crotch on it more" people did not have the exact correct position, once I explained it, they understood much better.

(Kids aren't as naive as you think. Better tighten up those parental controls on the cable.)

------------------
Come to Kansas City for the AAU National Judo Championships and I will also be hanging out after weigh-ins on Friday from 6:30 - 8pm  teaching matwork. I will be slightly more socially appropriate, since there will be children present.

Also, buy the book Winning on the Ground, by me & Jim Pedro, Sr. It's good, and I'm not the only one who says so.

Also available for the Nook
Posted by Dr. AnnMaria at 10:39 PM

You don't need to do an armbar that way. You don't even need to roll to get an armbar, you can go right from take down to armbar or arm lock and they have no time to respond. "Man parts" are sensitive and elbows + testicles = pain. I never understood why so many people focus on Juji-Gatame when Ude Gatame is so much more practical.

Off topic, but thought you'd like to see Travis Stevens competing in a bjj tournament.

I always wondered just how 'friendly' one was supposed to get with their opponents' elbow. Thanks for the clarification.
Oh, and LOVE the look on your face! :)

It also makes for a great escape opportunity to use the elbow to hurt the genitals of the person that is doing the juji gatame. Just enough pressure to have the space and moment of distraction needed to pull the arm free.
Threading the fine line of fair play but I would say that it would still be acceptable. Just like all the yoko shiho gatame with the Gi being pulled between the legs or using the chin to control the ribcage during osaekomi or the knuckle sandwich on the neck to get the choke or the knuckles on the thighs to open the guard position...
Do you have a compilation of these "rough" techniques that you use for your "friends" during randori and competition?

Anonymous -
You have a really good point about ude gatame. I do that a lot also. I should do a couple of posts about that. Thanks for reminding me. As far as man parts, I don't have any so I will take your word for it.

Jorge -
As far as rough techniques - if there is not a rule against it, it is fair play in my book. That being said, I am completely against bullying smaller or less experienced players. In my club, if you are doing matwork with someone much smaller, you are not allowed to use your hands. It evens the playing field a little, gives the smaller player a chance and teaches the larger one to use his or her body.