More than Judo Was Learned

Gompers Middle School is in south Los Angeles, in an area everyone but Jimmy Sanchez refers to as Watts. The school ethnic break down is 67% Latino, 32% African-American and 0% white. 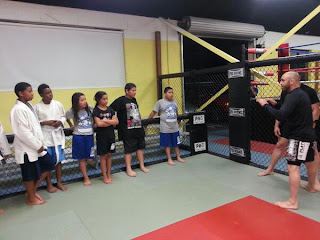 In case you don't know, Hayastan is a primarily Armenian school in North Hollywood, founded by Gokor Chivichiyan and Gene LeBell and home to many well-known fighters. I thought they had one African-American student in the class but then I realized he was actually a new kid in the Gompers Judo program that had ridden there in someone else's car.

We went to Hayastan because I wanted the students to learn a double leg take down from someone who does it better than me, so I asked Manny Gamburyan, a fighter in the UFC, if he would be kind enough to come to practice early to teach my kids.

All the kids did their homework in Mr. Gonzalez' room after school, and when they were done, the two teachers and I drove them up to North Hollywood. We got there early and Karen, one of the instructors at Hayastan, invited them to join in grappling with his class. Because our kids were mostly new, he told his students that if they were working with someone much less experienced they should teach their partner something. A couple of our smaller girls were really nervous about trying new techniques with their partners - and I should mention that most of the Hayastan classes were 95- 100% male.

After the grappling class, our Gompers kids joined in with Gokor's judo class. Again, they were often the smallest and least experienced in the group. Despite feeling really nervous, they all jumped in and at least tried every technique. They then went several rounds with the Hayastan players.

The first thing my kids learned about themselves is that they were braver than they thought. Although Hayastan was much bigger than any club they had ever seen and the players they practiced with were far more experienced, they found that each round left them more confident than the previous one. While  one or two of the players said after practice they had not thrown anyone even once, several others bragged,

"I knocked a guy down two times!"
"Miss, did you see me make that guy tap?"


The second thing they learned was that practice pays off. All of them worked with people more experienced who threw them several times. That's what happens in judo. Afterward, they asked me about several throws they had seen and when they were going to learn how to do them. They asked the students at Hayastan how long they had been doing judo and how often they worked out. Several Gompers students asked if it would be possible for us to have a second day of practice each week. (The sad truth is only if I find another instructor because my spare time is stretched to the breaking point, but we're trying to figure something out.) 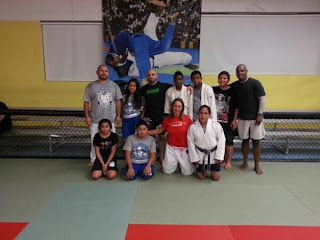 We went out to eat after practice and all of the students commented that they had never met anyone who was Armenian before that day, and then there was an entire building full of dozens of Armenians of all ages, one class after another, all speaking a language they had never heard before. I asked them what they thought about that, and every single student replied, "They were really nice." 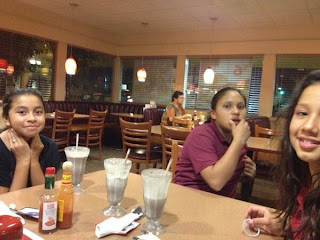 While we waited for our food, we watched youtube videos of Manny's fights and the students were really surprised, saying he looked so scary in the videos but was so nice in person. The third thing that was learned was a bit of appreciation of diversity and to be a little more comfortable in different settings and with different groups of people. That may have been the best lesson learned of all.
Thanks to the auction hosted by Armbar Nation of Ronda's stuff, we raised over $2,000 to cover plane tickets and hotel for four of the kids and a teacher to go to the AAU Judo National Championships. Hopefully, more lessons will continue to be learned.
Thank you to everyone who bid in the auction. You are appreciated.
Posted by Dr. AnnMaria at 2:22 PM

And then there are people who think you are not doing enough for Judo, because you don't take the risks and open a Judo school... seriously ?