No one is like family but your family: A picture is worth a thousand words

Your daughter, Ronda is SO sweet!


These emails were special in that they came from my family. Sometimes people ask me why I think Ronda has avoided the pitfalls that many other entertainers and athletes have fallen into. One answer is that, if you read the book she wrote with Maria, My Fight/ Your Fight, you'll see that it has not always been smooth sailing.

Still, by comparison to many young people who are in the public eye, she has her head pretty squarely on her shoulders. 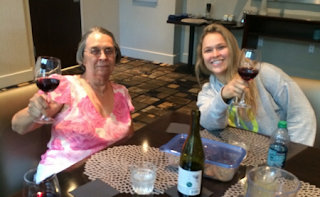 One advantage Ronda has, I think, is a large family solidly behind her that has always been there. No one is like family but family, I don't care what all the new friends sprouting up have to say.

When Ronda had book signing scheduled in Florida (State Motto: Your grandparents live here) there was no question but that she would carve some time out of her busy schedule to spend with her grandmother.

One way family is different is that you have history. Several years ago, Ronda was driving across country to get back to California and take her GED before going to work at the minimum wage jobs she had then. My sister lived in Missouri back then, and when Ronda stopped in, her Aunt Joy made her a home cooked meal and baked her cookies to take on the road.

If you look closely in that picture, you'll see a container of home made chocolate chip cookies that my sister gave her. My point is, Joy didn't like her any more or less then than she does today and I'm sure the cookies were equally delicious.

You have inside jokes with your family that other people don't get. For years, I've been telling my mom that I'm going to create an Internet persona for her as a party animal. Every time we are at a family get together, I make sure I have a picture of her with a drink in her hand - even if it is somebody else's drink or actually just water in a martini glass. That's her, Grandma, party animal.

Home is the place where when you go there, they have to take you in.


Anyone who has a good deal of success and is not an idiot realizes that much of what is pleasurable in that lifestyle is dependent on keeping up the money and media. Everyone from the waiter at the five-star restaurant to the person you are dating right now would find someone else if you were broke working at a 7-11. That causes a lot of pressure to keep it up, and sometimes that pressure can be too much.

There is a security in having family behind you. My mom was delighted to see Ronda. She was equally delighted, a month ago, to see Julia, who has written nothing closer to a best seller than her AP English final.

The fact that no one in the family is dependent on her success in any way probably helps to make Ronda's life more of an even keel. Yes, Maria wrote the book with her, but Maria had a career in journalism when Ronda was 16. This wasn't make or break it. As for the rest of us, we have our own lives, so if Ronda says something in the media that is re-printed on 47 different blog pages (why DON'T these people feel bad about not having original content?) well, we probably didn't even read it.

She doesn't have to worry about letting us down in any tangible way, and if she is acting like an ass, no one has the least reluctance to let her know at the very first sign.

On the other hand, if we tell her that is adorable, like in this picture with Rhadi Ferguson's beautiful daughter, Little Rhadi , she knows we mean that too. 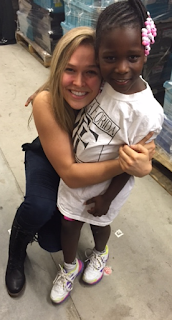 That's the thing about family - they know everything about you and they love you anyway. That is the source of security and sanity, in my not at all humble opinion.

The experience that I have with my family is very different than the one you have. For me that thing that family supports you and accepts who you are no matter what never really happened. My mother never bothered to see my belt exams and I can't even begin to tell you how difficult it was to make my uncles and aunts to help my grandmother when she got sick and couldn't move or talk anymore. The view I have from my family is a bit darker and I had no choice other than believe that your real family is the one you choose not the one you were born with. But I totally get what you mean and I think your family is very special. Rare, also.
Every time I think of Ronda I think of all you guys (except Jennifer cause I know nothing about her. Yes, you should totally write about her haha it's time) it is impossible to think of one of you and not remember the entire family. One of the reasons I like Ronda is that she is such a family person.

I wish Ronda and Maria would do a book signing together. Wouldn't that be special? I wouldn't be able to go cause I'm in Brazil but I mean, If I want Maria to sign my copy I believe that others would like that too.

I ordered My Fight/Your Fight and Winning on the Ground. It hasn't arrived it yet but I can't wait to read it.

PS: Make Ronda shut up about Tinder. The only thing she'll find on that thing is another creepy boyfriend and (thanks to the book) we all know how that end it.

In answer to your question "why don't these people care about original content"....the answer to that is....5 million social media followers...all things Ronda viewed or heard...ultimately sells.

You must know that by now.

Ive seen and lived through both sides of the family matters. The bad and the good one and although most of them are not around anymore i had a time during growing up which was very good in that sense and i had a great grandmother too.

At least one. The other one was an evil hag but the good one, on my moms side, made up for all of it and more. Yes, that included cookies too.

So i can simply agree with your post and say that people who dont get to experience bad family are very lucky.