Want to win at judo? Hit the road! 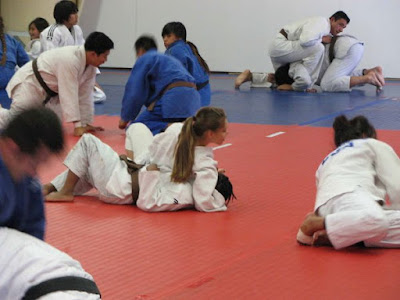 I don't know you, but just based on probability, I'm going to recommend that you start working out more if you really want to win.

I'm serious, hit the road and start putting in some miles. Let me give you a super-simple running work out


Yes, I know all of the things you are going to tell me - that is a 25 minute workout if you aren't a particularly fast runner, and I assume you aren't since you are doing judo instead of track.  I know that judo matches are five minutes.

Here is something else I know - most judo players aren't in the best possible physical condition, and their cardiovascular training is a particular weak point. There is a lot of opportunity to rest in a judo tournament. The picture above shows my little angel, Julia, pinning someone. How much effort is that for Julia? Answer, not very damn much.

I cannot tell you the number of times I have seen relatively skilled judo players lose because they were just tired out.

The advantage of the workout I just gave you is that it starts with a warm up. I don't know you but I've coached for a long time so I'm guessing that if no one is watching you, you aren't out there running like you're being chased by the police. (Not that, I, personally would know how fast one runs when chased by the police, cough, cough.) It's more of a fast jog.

You run up hill because it is harder than running on a flat surface. Judo is bursts of hard effort, punctuated by kind of coasting, like pinning your opponent or tying your belt while the referee wags his/her finger at you and admonishes you in Japanese.

If you get 10 good attacks in during a match, you're doing better than most people.

The other nice thing about my recommendation is that it requires nothing more than a hill. Even North Dakota has hills and it's one of the flattest states you'll find anywhere.

If you happen to live in North Dakota and it's too cold to go outside - jump rope for 25 minutes. You'll probably have to start with five minutes and work your way up.

When I lived in Minnesota and it was way below freezing outside, I used to go downstairs to the basement of our apartment building where the storage units were and jump rope. It was boring as hell. Jumping rope is not my thing, but it is good cardio and it's better than running outside when it is 20 below zero. You don't need a fancy jump rope. I was broke and in graduate school and I'm sure I just bought a piece of rope for a dollar at the hardware store.

So ... you really want to win more matches? Get in better shape. You have no excuse.

Feel smarter? You can show your gratitude by buying one of our games for yourself, giving one as a gift or donating to a school. 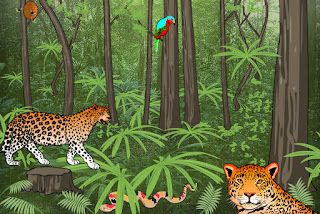 If you have gratitude but no money, you are welcome to download a free demo here.

The lack of proper strength and conditioning in martial arts is due to a demographic majority of mcdojo instructors. The mentality mcdojo instructors instill in their students is: cutting corners is ok. They delude students into believing they can have a complete self defense program and become a champion at a competitive level without doing proper cardio or strength training. They're the ones who substitute training like a professional, on a professional level, with ass kissing vastly overexaggerating their pupils abilities and achievements in training to give their students a false sense of confidence and security.

But you probably know all this better than I. Still would it be possible to get a blog entry on mcdojo instructors or con martial arts teachers in the future? I'm guessing you've seen a lot more of them than I have and I might learn something.

I've started using an interval timer when I'm cycling somewhere (1 minute pootling, then 30 seconds faster). Turns a chore into a bit of a workout.

My own modest practice these days consists of taijiquan and distance running. I ran my first marathon earlier this year.

At the end of the day, I think that it would be my conditioning from running that would get me out of a tight spot these days, rather than anything else (a lot of Yoshinkan Aikido and some BJJ in the past).

I gave it a try today... Hill sprints should be illegal! Took me an hour to get through the routine. Guess it's payback for being a heavyweight.

Jokes aside, I have a couple (silly?) questions:

2. What's a good incline to do this routine on?
I picked the meanest hill I could find up a dirt trail. Sprinting 50 yards up that thing was my absolute maximum (in a couple sprints, I had to walk the last 2 steps). I completed the routine, but I had to rest 2-3 minutes between each sprint.
Would it be more productive to tackle an easier hill and get rid of the rest period between sprints, or should I just keep going on the same one and working on reducing the total time? Being stubborn, I'd lean towards the second option, but at the end of the day, if I can get the same results faster...

It seems quite strange to me that, at least today's, higher level judo players wouldn't normally do physical conditioning. I've not been a participant in a hand to hand combat sport, but I did a lot of competitions with firearms back in the day. Physical conditioning was one of the things that was making headway for the higher level shooters back in those days, the 70's and 80's. Of course, I was too smart for that, and suffered the consequences for same. :-(

I wish that I hadn't been so smart....
Kerry