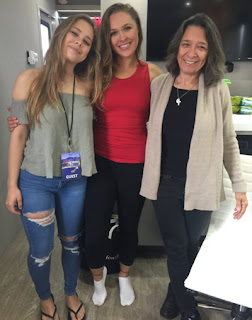 It's hard to find something the whole family will enjoy - at least in my family. There are some who love sports and some who are bored out of their minds watching any competition. A few years ago, my youngest was into watching High School Musical - OVER AND OVER AND OVER.  If I had to listen to "Get in the game" one more time I was going to pull an Elvis and shoot the TV.

Family members watching at our house ranged from age 2 to 61. Now the two-year-old just laughed at the dunk tank and then went off to do something else. My nine-year-old granddaughter liked the obstacle course the best. Everyone from nine and up liked seeing the stars they remembered from a few weeks ago (Fuller House) to a few years ago (High School Music) to more than a few years ago (Roseanne, Facts of Life).  There were a lot of exclamations of "Hey, I remember her!" which led to talking about "Remember when you were younger and that was your favorite show "  and "Yeah, Jenn and I used to fight over whether I got to watch my show or she got to watch her stupid old movies."

Bringing back memories and talking with your children are too big benefits to watching the show - anything that has families sitting around reminiscing is good. Yes, I know that is such a mom thing to say but every mom has a sentimental side (yes, even me).


All that is nice, but the main reason for watching with your kids is the messages they hear from the coaches. Kim Fields and Lisa Whelchel were hesitant to compete in the swimming competition because they didn't look the same in a swim suit as they did 30 years ago. They talked to Ronda about people on social media judging your body if you are a woman, and now they are women no longer in their teens like they were the first time they competed on the show.

"Strong is beautiful" ... and went on to tell them that no one should hold back on what they want to do in life because other people are judging how they will look while doing it.


As an older woman myself, as a mother of daughters ages 19-34 and grandmother of girls 9 and under,  this is a message we all need to hear.

Of course, I watched the first episode of Battle of the Network Stars because my lovely daughter, Ronda, was one of the coaches. Also, I'd been to visit her on set and the episode I saw had me laughing more than I had in years. The funny, silly and celebrity-spotting parts are important, I think, because, I can tell you, as someone who makes educational video games, to quote another childhood memory, "A spoonful of sugar makes the medicine go down."

In other words, your kids (and maybe you), need to get those positive messages about strong women and worrying more about what you do than about how you look doing it. However, they'll probably have more impact if those lessons come about naturally rather than sitting down lecturing them on following their own path and not giving up.

Both Ronda and fellow coach Demarcus Ware give a lot of positive advice to their teams who are very much not athletes - sometimes laughably not athletes - on just giving it your best shot and not worrying about your age or your level of skill.

Thank you for the positive messages you send out about strong women---women like yourself and your family. I have a great amount of respect for you all as so many others do, too.

You know me. We met about fifteen years ago while in Europe. I forget in which country, but I remember our conversation well. You basically vetted me. (I will send you another message with my contact info.)

I discovered your blog a few months ago and have been following since. Many of the things you've written, about life lessons in general and elite sport in particular, reach me. Whether I agree with the conclusions or not, they always make me think about the issues you raise and the contributing factors. And, some are damn funny. I hope you write a memoir. It would be a great read!

Many today, especially in the US, want what life "owes" them. Fortunately for them, seldom do they get it.
I'm no expert here, but based on what I've seen in life, you have paid your debt to the world, and then some. Please relax and enjoy your current blessings, two of whom are pictured with you. As Red Skelton used to say, " May God Bless " and THANK YOU for your time.

Is that the crazy obstacle course people have to run? sure I saw a youtube video of that or something similar where a naked guy invaded the set and ran most of the course in his birthday suit before security whisked him off, lol.