My Life Needs Better Writers (or, what happened to our reality show)

Yesterday, I wrote about our first idea for a reality show. I thought it would be amusing to go through some of our discussions with producers.

Me: What? No. I have four. All daughters. All wonderful.

Me: Um, well, we drink wine and sometimes a martini. But no, none of us have ever been arrested for DUI or in treatment or anything like that.

P (incredulous): NONE of you? Out of six people?

P:  Dennis isn't having a sex change, by any chance, is he?

P: Are you considering whoring Julia out to hip-hop stars?

Me: Look, here is my idea. We make video games and we want to open an office in the Caribbean because we think that would be a good market. Tobago is absolutely beautiful. We can have the show cover a game from start to finish, where we have to come up with the design and Maria and I, who are the least laid back people you ever meet, hire our crew from the island and have Julia I-can't-get-up-before-noon as one of our interns. Trying to get a game done on schedule is drama and tension in itself but add in starting with a new team and cultural differences and I think it will naturally get to the point of me wanting to kill people. I am sure I can set up teaching judo at some of the local clubs. Hopefully it will help them and I'll need it with the stress. Ronda says she'll drop in for a fourth of the episodes, lend advice on game design and testing, party with the locals and try to keep the peace.

Producer: I'm going to give you my honest opinion. This show will never sell. Your family is too boring. You don't have a million kids. You aren't little people. You have successful children and you all love each other. No one wants to watch that. They want to see people drunk and puking, screaming at each other, crying, talking about their addiction. They want to see a family that is a dumpster fire so after they watch it they can feel good about themselves.

We talked to six producers and I actually thought all of them were pretty good people but for various reasons, we didn't end up doing the show. Three of them passed on us, two of them we declined and one was mutual.

As for this particular producer we actually had a very nice, funny discussion. This was one person's honest opinion. I appreciated the honesty although I disagree.

Our family is not boring. We just need better writers

Take today, for example. Maria gave a talk about making games in DC at a conference with 1,200 kids - which still went on despite the government shutdown and the fact that she rewrote her talk at 4 am. It was great, by the way. Then, she was mobbed by kids wanting to play our games.

Ronda was doing a live wrestling show in Orlando. She travels so much that I actually had to look it up on the internet to what city she was in.

Julia took off for London where she is going to be living for the next five months.


I went into the office to work on a proposal for a new game, discussed the design of a game in progress, tried to figure out how to renew my visa for Chile, came home and taught an online class on biostatistics with all kinds of technical glitches, then created a video on exploring data.

Okay, well, my day was not that exciting today, but there have been other days in the past year when I've climbed a mountain to see the condors, went hiking in the driest desert in the world, watched hoop dancing at a pow-wow, been stuck in a hotel during a blizzard in North Dakota. Every year, I'm everywhere from the north woods to New York City. I'm scheduled to be in four states and three countries in the first five months of this year - and that's only what has been confirmed as of the first week in January!

Let's face it. I don't care who you are or what you do, much of your daily life is pretty mundane. (Unless you are working with Producer #2 .) You get up, have some coffee, take a shower, drive to work, go to a meeting, read your email, eat a sandwich. The winning competitions you didn't enter (strange, but true), laying on a Caribbean beach or heart-felt discussions with your children about life are just a fraction of that. Even Harry Potter and Hermione spent most of their time studying, sleeping and eating.

Speaking of sleep, I have to get some.

Buy Parenting Like I Know What I'm Doing , by me and Maria Burns Ortiz for only $1.99 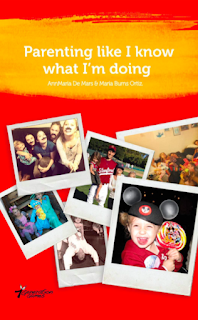 Boring? No! Normal? yes! Busy and interesting? Absolutely! I’m glad you didn’t “sell out” and go with any producer who was interested... we all know you’d never do that! So if the right one comes along and you sign that deal, let me know so I can get my DVR set, glass of wine poured and my easy chair ready. BTW, great picture with your mom and your girls!!!!!!