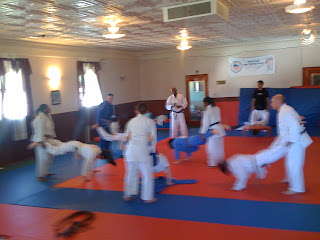 That may sound strange but this last weekend was a good example. On Saturday I woke up feeling singularly uninspired. That is unlike me. As much as I hate mornings, whenever I get to judo I am just happy to be there. Tony Comfort, a contender for the 2004 Olympic team, Raytheon engineer and new dad runs our morning conditioning practices but between the whole job-and-dad thing he had missed the last couple and Gary Butts had to work on Saturday. Well, thank God Tony was there on Saturday because I just was not feeling it. He did a great conditioning work out with our team at the local park. Stopping by to watch, I was extremely proud of them. It was over 100 degrees and they were doing sprints, step-ups and other conditioning and strength training exercises in the heat. Even our two littlest ones, Julia and Erin, joined in.

The Nanka Shorai games (contests for younger kids that include number of throws in two minutes, number of push-ups in two minutes, etc.) were during the lunch break and by the time those ended I was done. I was so sick, I laid on the couch and slept through the whole afternoon practice.

Tony did a great job and I know everyone at practice got a lot out of it. On Sunday, when I was still sick in bed, Julia went with Dad to buy new running shoes "for Tony's conditioning practices".

Laying in bed for 30 hours, I had plenty of time to think and this is what I thought about how lucky I am:

Now I realize that all of this makes me sound like a Pollyanna-ish look on the sunny side of life optimist. Well, first of all, I hated that movie and thought Pollyanna was annoying. Secondly, I think that I am not being optimistic so much as realistic.

My niece, Samantha, was reading some articles about "depressive realism" that said people who were depressed were more realistic about their lot in life while the so-called "normal" people over-estimated their own attractiveness, intellect, etc. in comparison to the judgments others made about them.

I would debate that reality is necessarily determined by majority rule. Now, I am not saying that if the majority of the people say that there is NOT a giant green bat flying around my head trying to eat my ears and I say there is that I would not be several steps over the line from crazy.

However, objectively, I would say that living in Santa Monica, having two kids through college, one headed to her second Olympics, good friends, a healthy little kid, past my tenth wedding anniversary, the bills are paid, is a good life. Other people might debate that I don't live in a big house in Malibu, or in a big house at all, we live in a townhouse, and I drive a mini-van, not a Porsche. For all the money I made over the years, I wasted it on trips to the Bahamas, Athens, Austria, Hawaii, Seattle, Boston, San Francisco, Disneyland, Universal Studios, Las Vegas, on designer clothes the kids didn't need, helping out friends who needed it at the time and a thousand other things. "Realistically," I should have invested more and spent less.

Objectively, I should have a job with a fancy title, a big office and a fat salary given all my years of experience. Realistically, I am an under-achiever being 'only' a senior statistical consultant after all these years, I should be in management, well, managing. 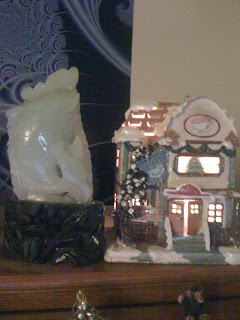 Maybe this is why the whole judo politics, judo trash talking and all the negative things don't bother me as much as they seem to bother some people. I have a great life full of good things. No one is shooting at me. The last time I was really hungry was making weight for the world championships 24 years ago. Most days, my biggest worry is finding a parking space, which reminds me that I own a car, am able to drive and live in a place good enough that so many people want to live there you can't even find a parking space.

I think I AM realistic and people who are depressed are just, well, depressing.
Posted by Dr. AnnMaria at 11:27 PM

This is so funny!! As I sit out on my deck on a one of a kind sunny Seattle day- going over the day that we had had at Budokan, I'm sitting here having a glass a wine thinking to myself that I have to be a such a crappy coach aka, " the catholic guilt" that only a sister could have drilled into us" and only another catholic knows this.. How in the hell could have I let my kids down so much and how my 9 year olds just didn't get there turn over drills. I will think of this day for a long while and oh yea I will be at mass tomorrow still filling guilty for the pain I caused ...but for now Annmaria it's always a pleasure to read your blog ..and I guess I might go have another glass and think about the next practice and try not to fill so guilty...... wishful thinking

My name is Terry Quick and I used to work for a Ron Rousy in Riverside Ca.

His wife was into judo. If memory serves me correctly she was an accomplished black belt.

Are you their daughter?