But You'll Get a Trophy! (Which I will throw in the dumpster six months from now) 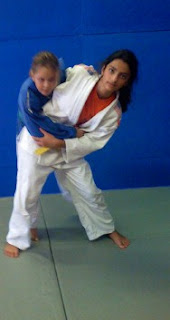 I mentioned to a co-worker today that it would probably cost me $120 just in entry fees for Julia to compete in the state championships. He said, "Yes, but you'll have a trophy. That's priceless."

I just smiled and nodded, thinking about how every few weeks I take another load of trophies and throw them in the dumpster. I feel kind of bad about it, but if I didn't, our house would be drowning in trophies. Every time I go upstairs I step over some gold medal Ronda won from an international tournament and left on the stairs the last time that she was home. Ronda isn't so much for cleaning up. I mean to pick it up and hang it somewhere, but the truth is, I'm not so much for housework, either.

It is funny how your perception changes over the years.

Gary Goltz (the USJA Chief Operating Officer) and I were talking about this today. Someone we know has begun coaching recently and he is quite good at it, technically sound, cares about his students, an organized, engaging teacher. He is also new, and when one of his eight-year-old yellow belts loses a match, gets quite upset. He may even blame the tournament director for putting a child into a division that is too heavy, too hard or too advanced.

In fact, I think this new coach doesn't have the experience yet not to take winning and losing too seriously. I often get asked how I would compare my little Julia to Ronda at the same age. Well, aside from the fact that Ronda had not started judo yet at this age, I see a big difference in myself as a coach. When Ronda went to the state championships, it was a HUGE deal. I think she was 12. The first time, the whole family flew up there to watch her compete. We got in a day early so she could get a good night's sleep and weigh in first thing so she could eat.

There was a club tournament tonight at Sawtelle Dojo. Honestly, Julia probably would have gotten more matches at that than at the state championships. She probably would have had at least three matches, maybe one or more with a boy. At the tournament this weekend, if there are any girls her age and weight, I doubt it will be more than a couple. I was tempted to take her to Sawtelle tonight instead of driving three and a half hours to Fresno. My main reason for going is that Sarah, Crystal, Amber, Haykus and others who are regular, dedicated athletes at the training center are competing. If they can show up and train every weekend, I can drive three hours to Fresno to watch the results and come up with ideas for addressing any weaknesses I might see.

What have I learned in the nine or ten years since Ronda was in her first state championships?

Similarly, when I pin someone with yoko shiho gatame, I put my left hand (assumeing I am pinning her on her right side) under her head and feed the lapel of her gi into my hand. Pulling it tightly, I can gold her down pretty well with one hand.

These are two examples of efficiency, when I can use one hand to pin the opponent and leave my other hand free to adapt to whatever she tries to do, to post, to grab her ankle or , as Julia always says, "To wave to your mommy."
Posted by Dr. AnnMaria at 11:34 PM

I ended up dropping off a load of trophies at the Salvation Army, where they got recycled.