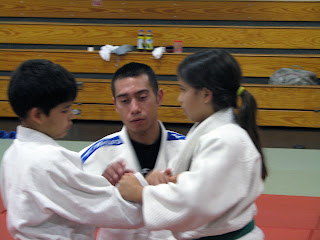 This was a great experience for all of the competitors. Some of the "elite" players who expected an easy time were surprised by players from Indiana, North Carolina and by some much younger players who were unwilling to accept that they were supposed to lose. For the younger players, this is where all of the extra practice paid off, like for Megan, who earned a silver medal on Saturday.

It was a great event.

The USJF Junior Nationals is in Chicago this weekend. If you couldn't make it to Boston this weekend, I suggest you don't miss out in Chicago.
The USJA Junior Nationals just finished and it was a good event. Anyone who didn’t go missed out. In her division Julia, who came from California, had girls from Pennsylvania, Florida, New Hampshire and New Jersey. Of course, I mostly watched the players from California. Crystal Butts went 1-2 against Hana Carmichael to place second in the under 20 division. For someone who is 14, that is not bad, but Crystal was unhappy because she knew she could have done better. There were a couple of players I noticed. Max Kafka from Minnesota got picked up and slammed a couple of times, turning out of throws and taking a hard fall on the mat. He fought back, threw his opponent with uchimata and won the match. Then, his opponent came back and won the re-match and the tournament. Aaron Kunihiro lost to a player from North Carolina and then came back to win his division. Ben Branson, from Indiana, was down by a waza aria against Tyler, from San Gabriel, and came back with a fireman’s to win the match by ippon.

What all of these and many others had in common is that the players refused to back down. They were out-muscled. They were fighting players much older, from well-known clubs, with famous coaches and the came from small towns and states better known for corn fields than judo. They came back from losing and won the tournament.

Thinking back to the Olympic trials where I saw a lot of people who took no chances, who seemed to be hoping for a result of not losing badly, or waiting for the referee to give a penalty to the opponent or save them in matwork by calling matte. What happened between fifteen and twenty-five? Gary Butts thinks it is complacency, that people become satisfied being the junior national champion and don’t strive to be better. Part of it may be that. How does that happen? I think part of it comes from allowing excuses. When Julia lost a match by a koka, she said that the other girls said her knees were on the mat and it wasn’t really a koka. In my opinion, it seemed like enough of her shoulder might have touched the mat to be koka, or maybe not, that’s what judges make is judgment calls. I didn’t tell her that. I told her that she was close to turning the other girl several times, that her matwork was better, that if she applied a little more power she would have turned her into a pin and won the match by ippon. She did end up winning the next three matches by ippon and winning the tournament.

I am sure other coaches told their students the equivalent, that it doesn’t matter what club or state the other player was from, whether they won the last match. Go out there and fight to win. At the junior national level, I see fewer players fighting not to lose than at the senior level. You may see less technique, but you see more guts.

As a former wrestler, Gary has some insight into the difference between the sports, and I saw much of what he mentions first-hand at the Olympic trials. Overall, the wrestlers were in far better physical condition. There were exceptions, but in general, their number one players were in better shape than our number one players. Most noticeable was that there was not much gap in physical conditioning between their number one player and the number five or eight wrestler. In judo, the differences were stark. Again, this was not true in every single case, but in the majority. Wrestling has depth. We don’t.
I heard a speech on TV where John McCiain was citing the problems in the U.S. educational status, in our poor international standing in mathematics and science, our high dropout rate. He quoted Bill Gates , saying, the problem isn’t a flaw in the system, it IS the system.

Speaking of systems and idiocy, the USJA Board Meeting was on Saturday night. It dragged on for hours on items that should have taken minutes. After three hours, Jim Pedro, Sr. got up and left. That was the end of the meeting open to the public and then there was supposedly going to be a meeting closed to the public to discuss issues of ethics. Jim Bregman and I got in a cab to the hotel with the intent of convincing him to come back. On the way, Bregman looked at me and said,

“He’s right, you know. This is ridiculous.”

We fly across country spending a thousand dollars or more out of our own pockets, sit for hours in the evening when we have kids who competed that day and all the next, often finishing at midnight – and why? Because maybe something might get done in the wee hours if we stay long enough and listen to people go on for hours about why they should be promoted to seventh degree black belt because they filled out enough papers and demonstrated kata, or why we should not raise our dues once every ten years. Then, in the end, the promised changes never transpire, with us being told that if we would all only fly to Virginia or Florida or Georgia for the NEXT meeting then surely all will be made whole there. After three years, we finally came to the realization that this was all contrived to make our organization weak by making it difficult for people to be part of the board and unpleasant at that. I have yet to attend a meeting that did not drag on so long in pointless rhetoric that half the audience drifted off out of boredom and in the end even board members walk out in disgust. I have never seen meetings run so poorly as by Jim Webb, the USJA President.

Mitchell Palacio, the former USJF President will be running against Webb for the USJI board representing the USJF and USJA. Even the thought of attending those board meetings makes my eyes glaze over. On the one hand, maybe Webb and the USJI would fit well together. They don’t have enormous accomplishments to brag about either and I believe their board meetings are held in a basement, at the end of a secret tunnel behind a door marked Beware of the Leopard.

In all fairness, though, I think Mitchell would do one heck of a lot better job. Since leaving the USJF presidency, Mitchell has been vice-president and then president of California Judo, Inc. In the last two months there has been a judo camp in southern California with over 65 people co-sponsored with CJI, a state championships with over 600 players, a clinic in northern California with Tony Mojica and a national novice and brown belt championships.

Maybe it’s not that judo organizations have to degenerate into a state of idiocy. Maybe we just elected the wrong people. Maybe we could fix it with the USJI this year and with the USJA next year. As I told the kids this weekend after any match they lost , if there is something you didn’t get right the first time, fix it the next time.
Posted by Dr. AnnMaria at 10:40 AM

I didn't realize that the higher levels of Judo involve a lot of board meetings that go nowhere. It sounds like a Dilbert meeting gone bad.

I'm just happy to go to practice on the mat.

Thanks for the insights to the higher levels of judo administration.

Hopefully something productive can come out of it.

tomatoes, this could all be solved with tomatoes. Those guys will stop droning on so long if they know tomatoes will be thrown once they reach the maximum boring pointlessness level allowed.

I'm thinking it would be really amusing if you gathered a group of people with boxes of tomatoes. Just set them on the tables in front of you in preparation.

Tomatoes! Why did I never think of that? And particularly effective now, too with the salmonella scare.

AnnMarie, you did not think of tomatoes because you were too busy thinking of how many of them you could choke out!

If you were to re-design a judo organization which would it be and what would you do?

The point about conditioning in Judo is a good one, but might need to be approached with caution.

Here in the UK the BJA is about to introduce non-competitive gradings for juniors (madness, I know) as they believe the pendulum has swung too far the other way. The belief is that British players were focusing on conditioning to the exclusion of technique. I can't say I've seen the evidence of widespread great conditioning (as former rower & rugby player my view of conditioning is probably closer to yours), but the proposed 'solution' is one for the US to avoid!

For the new BJA syllabus, p2 "There is no contest requirement in the Kyu Grade syllabus however there is a progressively structured Randori element at the higher grades, where at the highest level, Randori is based on open skills." see: http://www.britishjudo.org.uk/technical/documents/KyuGradingSyllabus_004.pdf

If I were to redesign a judo organization what would it be? What a fascinating question!

That would be a very long answer, but in short it would be oriented on delivering services to the members, not the board. It would have a strong electronic component for education, a good website with lots of judo information, not PR for the organization. We have some of this at

Financial and human resource support for activities and individuals would be performance-based, e.g. the development director would be evaluated on the quantity and quality of activities for promoting judo, the coaching program on how many educational opportunities were available for coaches and the quality of those.

In my biased opinion, the coaching and development activities of USJA are very good but these are carried out by enormous efforts from a lot of good people around the country and supported by generous donations from more good people which are made directly to the development fund.

Maybe my idea of a good organization is summed up best by the end of Sleeping Beauty - that evil die and good endure.

Now where is an enchanted sword when you need one?