No, Your Coach is not God and You are Very Far From Jesus Christ 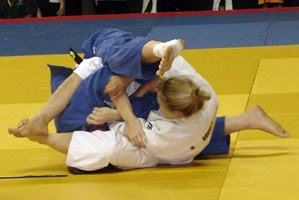 The perils of self-satisfaction OR
Just me being evil again

Last night, I asked someone if he had many visitors at the club where he trained. His answer was,

"No, no one comes to our club because they are not tough enough. We train harder than anyone else and no one else can keep up with us."

True to my reputation for rudeness, I responded,

"That's not true. I have been to your club exactly once and there were about a dozen visitors there.

He looked taken aback. It truly is rude to correct someone to their face and it is one of the many things people don't like about me is that I refuse to buy into other people's myths.

Now, their club is very good, no question about it. The one practice that I attended I was quite impressed by the knowledge of the coaches, their teaching and the way the practice was run. However, it was not true that they are so tough beyond all others that no one comes to visit because there were visitors the day I happened to drop by, and I rather doubt that was just an amazing coincidence that the day I came was the one time in the history of their club that they had visitors. And, in fact, they had visitors from two clubs, because I brought one myself.

My point, and I think I have one, is that ever since the Olympic Trials I have been turning over and over in my head what was the difference that made one person go out and win and another not. In most divisions, there was more than one person who was capable of winning, technically, physically - and yet one came out ahead and the others didn't.

I know that I see things that most other people don't. That is what makes me a good statistician, being able to detect patters, to look at a page of numbers, even without a statistical test, and say, "That's statistically significant. The number you see here is so much different than what you would expect by chance, it has to be."

In judo, I often see two people go out in a match at the beginning, both trying to win. At some point in the match, though, one person will give up. Taraje Williams-Murray, in one of his video blogs talked about how Jimmy Pedro, Jr. will break people in a match. He just keeps grinding on the person until they give up. I do that to lots of people in matwork to this day. I can feel them give up, thinking
"Oh, she's got me, this is too hard."

"There comes a time when you need to stand on that line and show what you're made of."

That is my point. There is honesty in competition. If you are truly better than the other person, you will win. This isn't always true if it is close, but if you want to be a successful international competitor, you need to be head and shoulders above the rest of the competition in the U.S. That is your goal. You don't get there, though, just by claiming it.

How do you, then? I don't know. I have some hunches, though.

1. You never make excuses. You never blame the referees, for one. This is NOT saying that the referees are not ever wrong. Everyone is wrong sometimes, even me. However, the odds are (I am a statistician, after all) that just as many calls will go for you as against you. There are also a few referees who are blatantly biased. It has probably always been that way. I took that as a challenge. I fought matches in the finals of the senior nationals where I knew if the referee had the slightest chance he would give it to my opponent. I went out determined to make him give it to me. Actually, that is kind of fun on two levels. First, the person who can't stand you has to award you the match, and second, it forces you to set your goals high, to be so much better than the other person that even if you need three ippons in the match, you will get them.

2. You face reality. I am a huge proponent of honesty in all things. My youngest daughter lost a match a while ago. She was fighting someone much bigger, was behind by a koka, the other girl got out of Julia's pin and won the match by a koka. Later, we talked about why Julia lost. She said she was tired and the other girl was strong. We talked about not giving up in a match. The reason Julia lost was not because the other girl was older and bigger. It was because she gave up when she had the pin and her opponent was trying really hard to get out. Judo is hard. Deal with it.

3. You take an honest look at your practice every day, every round. Coincidentally, I took a few players to visit another club that told me no one visits them because their practice is so tough. (No one? I was there with two players. What are we, invisible ninjas?) Their club does well in tournaments and I was interested to see their practice. They fought really hard and none of this sissy stuff like crash pads that I use - the coach was too polite to say that, but he implied it. Yes, his players went very hard every round and did their throws hard on the tatami. I also saw at least four of them sit out a good 10 - 15 minutes of the practice each with hurt ankles, twisted fingers. I saw the same thing happen in the trials with people. If there was a 90 minute practice and you showed up 10 minutes late, taped your ankles for 10 minutes and sat out "injured" for 10 minutes, you did two-thirds of the practice.

4. You look at people as training partners instead of inferiors. I think this is a huge deficit in American judo. I have been to so many camps and clinics where "elite" players in the area did not show up because, "It's just a bunch of kids. I'm going to lift weights." Two funny things about that. First, Ronda is usually at those events, which is half the reason I go, because I like to spend time with her, as well as all my other daughters. Ronda can give just about anyone in America a hard round or two. Second, any judo workout is better than none, unless you're doing some completely stupid thing I cannot imagine. Yet, Jimmy Pedro, Jr. will have a camp in Boston with Ronda, Rick Hawn, Aaron Kunihiro and others, which many people will not attend. The next week, Serge Bouyssou will have a camp with a lot of tough competitors, which many people will not attend. This weekend, there will be a three-day camp in San Diego with Ronda, Rick Hawn, Aaron Kunihiro and 47 others who are signed up. A lot of people will not attend. Yet, at the next event, those same people will tell me how they trained as hard as they possibly could.

Actually, no, you didn't. When you go out there to fight, you know that in your heart, and the one person it is hardest to lie to is yourself.

For some people, it is more important to be able to look down on others, to say no one can teach me anything, my coach knows it all, our club is the greatest, than to win. Those people do win from time to time. They usually aren't completely deluded. They have some talent, their coaches have some knowledge and they do train. However, I think the people who really win in the long run are those who are constantly are searching to get better, who are the least self-satisfied people in the room.

AND ANOTHER THING: If (insert player's name here) would just do what I say, they would win. I heard more than one coach say that last week. Actually, I think one of the reasons that Ronda wins is that she does think for herself. I believe, for Americans, that there is a negative correlation between doing what you are told and international success.

More about that later, I need to go to work.
Posted by Dr. AnnMaria at 8:09 AM

"For God resisteth the proud, and giveth grace to the humble" (I Peter 5:5).

After a review of your most recent post to the Judo forum, an objective individual can discern that you are egotistical. Procuring a gold metal in your day in the world's is tanamount to obtaining gold in only a selective geographic region in today's world. Today's competition is more keen. Yes, you have posted that you have procured gold at the world's many times before and also about obtaining advanced degrees - BIG DEAL! There are multitudes of individuals with advanced degrees. A true professional is humble and doesn't constantly articulate and promulgate their accomplishments - that is truely vain.

This is a great post. That is just strange that a club doesn't allow/have/recognize visitors?

Isn't that the whole point of judo is so that you can train with as many different people as possible? My last trip to San Francisco I stopped by 2 judo clubs and they were more than happy to let me roll around. I think, I must've visited over a half dozen judo clubs when I do travel. I sometimes pack my gi when travelling just for the opportunity to train somewhere else.

Also I like the whole mental suggestions that you do have. It's been truly a longtime since I really got a good ippon. And yes, there's a feeling of helplessness sometimes if you do get the pinned and sort of give up. I don't know, for me, there's something about not giving up.

I like your posts and how you are direct and speak your mind. Very refreshing.

Hello, Anonymous (nice name) -
Yes, I am proud of my accomplishments, which came about through the support of many people from my wonderful grandmother, my teammates, my coaches, my professors and the late Frank Fullerton.

I was brought up to believe that every talent one has is a gift from God and we are to do the best we can with it. I have tried very hard to stand up to that challenge.

Let me guess... you did not win any medals, you don't have any degrees and you are male. As my husband says, only weak men are threatened by strong women.

Oh, and you may want to read up on that whole judge not that ye not be judged by the same measure thing.