You have no power over me ! 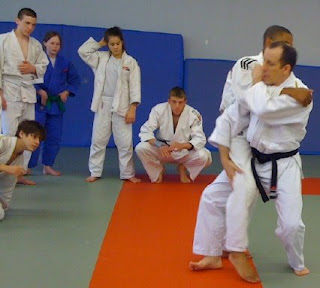 Through dangers untold and hardships unnumbered, I have fought my way here ... For my will is as strong as yours, and my kingdom is as great...you have no power over me!

At the end of the movie, Labyrinth, the heroine, Sarah, confronts the Goblin King to rescue her baby brother. She triumphs when she realizes that all of his power comes from convincing others they are less than he and to fear him.

This week, my daughter, Ronda wrote in her blog about a referee, Fletcher Thornton, who has had many affidavits filed alleging molestation of underage female athletes. Some people told her she should not do that, calls might go against her in judo matches if she spoke out. I am proud Ronda is my daughter. I looked and the blog is not there now. A lot of pressure has been put on Ronda to take it down, from people who should be a whole lot more concerned about whether children were molested than about coercing Ronda to take down her blog post. The post is still on the Judo Info site and has been read by more than 5,000 people.

The NBC site mirrors Ronda's blog every day, but they did not have the courage to mention it that day. Fourth Place Medal website did ,though, good for them.

I am just listening to the Judo Podcast where Serge Boussyou stated that after his daughter's match, he was talking to someone and Kei Narimatsu came up and told the person, "You are not to talk to him."

I am proud that Serge is my friend.

After Ronda's blog, two other people wrote about cases of minor female athletes being molested. One person was a victim and one had been involved in investigation of another case of child molestation.

Speaking out against injustice, whether danger toward minor female athletes or inadequate review of refereeing in the Olympic Trials is the first step in stopping injustice.

I have said this many times - one of the things you need to learn from judo is COURAGE.

In the podcast with Serge and Rhadi, they talk about COURAGE. If you think a call is wrong and you are a referee, you need the courage to stand up and say, "That is wrong."

"Do you know why the referees have all of the power in USA Judo? Because we let them have the power."

Serge is exactly right, and it goes beyond judo.

If you see something that is wrong, whether it is a child being abused, a coach who is treated disrespectfully, an athlete who loses an Olympic spot due to a poor call - speak up. If you are in a sport where people can knock you down, choke you unconscious and dislocate your elbow, you should have learned to face down your fears.

Speaking up for what is right will make the community better and it is just plain the moral thing to do. Aristotle said,

"Courage is the first of human qualities because it is the one that guarantees all others."

If you have the intelligence to see the right thing, the morals to want to do the right thing - but you are afraid to do what is right - then what good were all of those virtues, really?

Think about this - are you letting things that are wrong continue because you are afraid? Think about it again. Maybe, like Sarah, you will realize that they have no power over you. Face down your fears.
Posted by Dr. AnnMaria at 9:53 PM

You are telling me that there are multiple affidavits? What happened with the prosecutions and the civil claims?

I do know that after the first several he left the state where the reports had been made and moved thousands of miles away - but he resurfaced years later.

I asked the person who had signed the letter firing him from his job and he said that Fletcher had been fired and moved out of state. Maybe the parents considered at that point that he had been run out of town and lost his job and that was enough. I don't know.

As one of the girls said, "I thought he was out of judo and tried to put it out of my mind."

As far as whether any settlements were made out of court, I would not know.

I do know that I was contacted a year or so ago about possibly testifying in a civil case and I said I would be willing. What the status is, I don't know.

I am very careful to only state things I know to be a fact and for which I have written documentation.

Thank you for the update, I so wish for healing for those who were injured.

The Judo community needs to investigate these claims, and not bury them. If the USJI has not performed adequete background checks on its staff members, they would be seriously remiss.