The Product of the Choices We Make 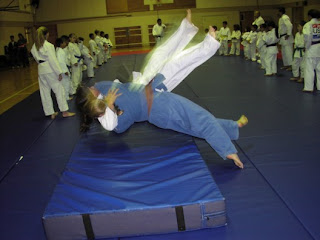 Some really good people called me today and talked to me about serious concerns they have about the failure of some coaches to safeguard their junior competitors, especially females. They gave examples of tournaments where coaches were at parties drinking where players far under legal age were present, and the coach did nothing. They mentioned clubs where it was common knowledge that underage players were having sex and everyone turned a blind eye. These very good people very articulately stated their belief that these types of behaviors made it hard for us to retain female athletes in the sport and just in general caused problems all the way around. As one of them pointed out, if a high school teacher was at a party at the school, say for the Biology Club, and students were drinking and he/she didn't do anything, that teacher would be fired. As the president of the USJA, they thought I should do something. They did not have a good idea as to what that something was, but thought the issue should be brought up.

I agree it is an important point and I don't mean to abdicate responsibility. However, I do want to point something out, I told them. All of those parents chose the places they sent their children. Some may have made mistakes or been unaware of the situation. However, in some cases, the parents were fully aware. More than once, I have been very upfront with parents about why I thought their child should not go to a particular club. I do this largely because I wish people had been more forthright with me when Ronda was younger. Everyone was too afraid of offending someone to tell me the truth. Now, if I feel there is no way on God's earth I would send my child to a judo club, camp, clinic or tournament, I find it impossible to reconcile in good conscience standing by silently while you send your child there.

The same is true for athletes or students or anyone else. Over the years, I have known a number of athletes who drank regularly, some who smoked marijuana and some who used steroids. Now, I cannot claim to be Mother Teresa. In fact, I am sitting here writing this blog drinking a glass of red wine (very good red wine, too). However, the fact is that I am 50 years old and not competing in anything. As a competitor, I made the choices that would help me succeed. I didn't drink because judo is a sport with weight divisions and with the limited calories I could take in, there was no room for having six beers in a night. Athletes who do drink regularly have to cut those calories in other places or do drastic weight cutting, sitting in the sauna for seven hours before weigh-ins and other efforts that just make them that much less able to compete the next day. I only feel a little bad for them when they lose, because I actually felt bad for them weeks or months earlier when I saw them making those mistakes, when I knew they were going to lose.

Whether an athlete, a coach or a college student, the person who doesn't forego playing games on their Wii or computer, get up and go to class or practice and in general put a real, sincere effort into succeeding doesn't succeed. This doesn't take a Ph.D. in statistics to figure out. No one is going to check on you every night to make sure you studied or did your 100 matwork uchikomis, no one is going to poke you and make you get up in the morning to go to class or go out and run. If you don't do those things, you will likely fail, in school, in competition, in life.

My niece often accuses me of being judgmental. She'll ask me questions like,
"How can you say that person is a failure in life? Maybe he is happy working at a carwash at age 50 and sleeping under a bridge."

If you have the ability to be a great athlete, a great writer, a great scientist, a great manager - or even relatively decent at one of those things - and you decide instead to spend your days playing video games, drinking beer and working out four times a week and leaving other people to, in Levinson's words, "Become a man and pay your dues to society and the species", then, in my judgment, yes, you are a failure at life. By the way, I looked up the meaning of the word judgment. It is the capacity of making decisions authoritatively, objectively and wisely. Engaging in judgment is not a bad thing, in my, um, judgment.

All of us, parents, coaches, athletes, students, need to take responsibility for the choices we make, because I guarantee you, those choices are what will shape the rest of your lives.
===== REQUIRED JUDO TIP ============
Along the lines of repeating myself over and over ... Ronda said that someone asked her at practice today why she always teaches the same thing. Her answer was that it was important they learn some specific gripping techniques and they had not learned them very well yet. She said that her goal as a coach was to make them better, not show how smart she was.

I am going to repeat myself because those of you I see at practices around the country don't seem to have been listening. I wonder about you people. I win a world championship gold medal. My daughter wins a world championship silver medal. I tell you, "Look, this is how we did it."

I would think you might at least try seriously following that advice. But no, people keep looking for the magic, easy shortcut. I will go to this club and Joe Cool will be my coach and I will live in Amsterdam for a year and I will win the Olympics.

It doesn't work that way.

Do matwork uchikomis. Do 50 of two different techniques, right and left-sided. that is 200 a night. Do these every night. Quit whining about not having enough partners, not having enough tough people, not living in an area with a lot of judo. Find a body. Find three or five bodies, nice people who will let you do 40 repetitions each on them. Pick a couple of techniques. If you have attentional problems and just cannot do 100 each of two different techniques, do 50 each of four techniques. Or vary, one night do two, another night do two others, the next night do all four. DO THIS.

That's the secret. There is no secret. It is work, repetition and sacrifice. Make the choice. Do it.
Posted by Dr. AnnMaria at 10:36 PM

I think you hit the nail on the head that it comes down to hard work. I like how you said that there is no magic easy way to get to the top.


I have an idea for you. How about a course on how to keep volunteers in my organization?

Volunteers are a very important asset and yes most people don't know how to keep them motivated. I think that a course adressing the basic necesities that humans need regarding motivation techniques can be very important in maintaining an activer number of volunteers in judo.

It my sound stupid, but the people I help and parents I work with really appreciate my team and effort and probably that what makes my time worth while. Well, the others didn't.

There is nothing more annoying than working your free time for ungratefull A-holes.

Reading about your new position and knowing just a bit about your philosophies, I am very happy for USJA. I wish their was a body such as this for BJJ. Since there does not seem to be, I want to try to associate Evan with USJA as much as his BJJ training will allow time wise. He is very excited about attending the clinics in December out there, and as a parent I view any chance to learn from Jim, you and your coaches well worth the effort. And his coaches and Sensei Ruiz are thrilled with the idea. Any word on SZJ camp for kids?!