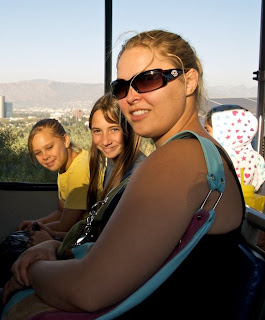 I was reading Ronda's blog about taking a break from competition, and I was going to post a comment. Yes, she was actually lying on her bed in the room down the hall but getting up and talking to her would entail moving from this spot on the bed, lifting my laptop off my lap and walking over 15 feet. So, I got an even better idea, I hadn't posted anything to my blog for a while...

Especially given the changes in IJF rules, some people have questioned Ronda's decision to take a year off from competition. In her blog, Ronda was saying that she was so happy being home in the sunshine, eating real Mexican food that she had to ask herself why she would want to ever move back to freezing Boston.

I think she is doing exactly the right thing.

Long before that song from Iron Maiden, it was actually the book of Ecclesiates in the Bible which said,

An interesting post on this subject, also on Blogger, made a very good point that we need transitions in our lives. He gives several examples, including how he would never have met his wife if he hadn't been dumped by a girlfriend.

Changes in life affect us in two ways. When we have changes for the better, we appreciate what we have so much more because there is a comparison. For example, there was a time when I had to work three jobs to pay the mortgage, keep the kids in private schools that I thought were really important for their education, pay off my husband's medical and funeral bills and so on. Often, I would work until I was just too exhausted to work any more, set the alarm clock for early in the morning and drag myself out of bed to write another grant or lecture or evaluation report before driving the children to school and teaching my morning classes. Now, every time I go to bed when I am tired, I realize how fortunate I am to have that luxury.

Whenever I do anything that is not an absolute necessity, from going to Universal Studios with the family today to paying for the other stupid cat's outrageous vet bill to searching on-line for a mountain cabin for a family vacation, I realize how lucky I am. There was a time when I could not have afforded anything but the absolute necessities and I appreciate all of the luxuries and extras of my life now, large and small.

In the same way, having those days when she was running in the snow in Boston, waking up at 5 a.m. far from home - all of those experiences make Ronda appreciate every sunny day in paradise a lot more. She doesn't take sitting by the beach eating good Mexican food for granted.

Having been there, I have no doubt Ronda will go back to competition. When she does, it will be a stronger, better Ronda than before the Olympics. Taking time off gives your body the opportunity to heal. All of those stresses and strains put on your joints and muscles can heal 100%. Push the human body to the edge of the envelope too many times and it tears - I am living proof of that fact, as are most other athletes who succeeded internationally.

The time an athlete has to rest, relax and pursue other interests provides the same advantage psychologically as it does physically. There is plenty of research on the negative impact of a long period of high stress.

Now, don't all of you who work out three times a week take off next week and say that I recommended it! However, it is a long, hard, road to the top of the world, as I have said approximately 43,287 times. Let's say you really have been pouring your heart, soul, blood, sweat and tears into competition for three or four or five years. I'd be willing to be that 95% of you who think you have been could have worked harder, a statistic I made up based on watching judo players for 38 years. Assuming you are one of the other 5%, I don't believe it is possible to train at that level for 10 years straight without crashing and burning at some point. By definition, you cannot peak every day. Most people will see a drop in performance right after a peak. If you have truly poured everything into hitting a high point in a competition, then, logically, you have nothing left.

Your two options are to continue to compete and give other people a chance to take a shot at you during your low point, or to step away and recharge your batteries.

As anyone in the family can tell you, Ronda is the slowest moving ambulatory human being on earth. Whenever we are out anywhere, we are always yelling at her to hurry up. Her sisters would marvel over the fact that she could work out for four hours a day but couldn't keep up with a five-year-old walking through Sea World.

Today, I noticed that we were all having to rush to keep up with Ronda. Her walking speed had quadrupled. When I commented on it, she said,

"I think before, I was always still charging my batteries, resting up from the last workout. Now, I'm fully charged."

Eventually, Universal Studios, Disneyland, Santa Monica Beach and Pancho's Tacos will get boring. Everything is like that. Right now, she is really happy with every workout at the West Coast Judo Training Center and really enjoying working with the athletes, but after a while, they'll be ready for something new. Now matter how great anyone is, they don't know everything. For now, she is happy running the workouts and I am happy having her to do it. It gives me time to get caught up on work, have conference calls with the other USJA officers on how to improve our organization, and still have time left over to go on the Mummy Ride and Jurassic Park (I DO recommend that, by the way).

When I was little, I would complain whenever it rained, because I always wanted it to be hot and sunny. When I was about ten, my grandmother sat me down and explained patiently,

"If you had your way, you know what would happen? Where it is sunny every day, you have desert. The rain softens the ground so that plants can put down roots and grow. When it is sunny, they grow upward, put out leaves and get sun. All of one, your plants drown. All of another, they wither and die. In every life, rain must fall. Remember that."

Then she gave me the Book of Proverbs to read and sent me upstairs, where I read it by the window looking out at the rain. That is actually one of the more memorable afternoons from when I was a small child. Incidentally, the Book of Proverbs comes right before Ecclesiastes. Bet you didn't think I knew that, did you.

Changes are good. God and my grandmother said so.

--------
P.S. For those who are training oh so hard - Practice at Goltz Judo on Saturday, 9:30 a.m. - 2 pm, 1700 Danbury, Claremont, CA. followed by conditioning in the park.
Sunday practice at Santa Monica Beach. Tony has some great conditioning planned.
Posted by Dr. AnnMaria at 9:37 PM

BTW, having to work your way through the membership section to donations to reach http://www.usja-judo.org/Merchant2/merchant.mv?Screen=CTGY&Store_Code=USM&Category_Code=M1 is not terribly intuitive.

I had tried http://www.usja-judo.org/donations/ before, and it doesn't quite take you anywhere but a mail in form.

Anyway, I made a small donation, it is meant to go for the programs for the kids who need it.

Or for more burritos. Either will do.

Thank you for doing this. It is much appreciated.
We will spend it on entry fees and not burritos.

I will talk to John, our volunteer who runs the website, about the donations.