Captain Obvious Advice to the Brain-impaired 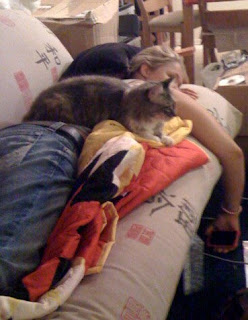 "I would have gone to judo but I was being held hostage by my cat."

Jim Bregman and I got a big laugh reading about some players who said they had not won medals at the Olympics or world championships because they did not get enough money to train, good enough facilities or have the incentive money offered to other athletes. He turned to me and said,

"Yeah, unlike the briefcase full of money you and I got."

I told him that my box of money must have gotten lost in the mail.

FACT: The VAST majority of people who are complaining about their lack of opportunities don't take advantage of the opportunities that they do have. This weekend, we have two practices on Saturday, we're heading up to a tournament three hours away right after practice. Next weekend, we have two practices on Saturday and a clinic on counters with guest Gerry Lafon on Sunday. I will be very happy to work with the 20 or so people who show up at each practice.

FACT: You will have a happier, longer tenure as a coach if you don't waste any thought on the people who don't come to practice. All of the people who tell me how much they want to win and don't come, I have quit trying to convince. I just think to myself, "Ah, ha, another cat hostage." And I go on with my life.

FACT: People in judo are just like other people, and realizing that will make everyone understand each other better. I get asked to attend something for judo just about every day of the year. Since I am both a coach at the West Coast Training Center, president of the USJA and the mother of a ten-year-old, I try to meet those commitments first. Sometimes people get angry at former athletes, board members and others who are higher profile because they won't fly across the country at their own expense and teach in their community for free. Would you be upset if a teacher you had met briefly wouldn't take off from his/ her job and teach at your local high school 1,500 miles away? Why not? Education is a lot more important than judo, isn't it? You wouldn't ask it because it is unreasonable.

FACT: Board members don't get paid and the ones you really WANT volunteering for your organization are those that have skills, like being a CPA like Paul Nogaki, an expert in marketing like Gary Goltz, technology expertise like James Wall and Neil Ohlenkamp. That means those same individuals have other demands on them. I think that is actually okay. When I think about it, I am not so comfortable with the thought of our organizations being run by people who don't have any greater professional, personal, social or academic commitments than attending a judo committee meeting. It's kind of like the old saying about politics in America, that no one who wants to be in public office should ever be trusted with the job. 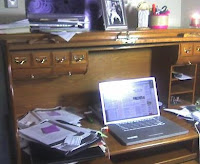 Don't misunderstand me. Most of the people I work with in judo are wonderful. They are teaching at their clubs, taking their children to practice, organizing tournaments and a hundred other things.

Then there is that minority who expect a lot more than they give. Not so obvious, in the Tribal Leaders Institute forum there was a discussion about what the biggest problem is on the reservations. The company president, Dr. Erich Longie disagreed with my idea and said,

"Here is what I think is the biggest ethical issue on reservation and anywhere for that matter, knowing the difference between right and wrong and doing wrong anyway AND THEN lying to yourself about it."

If you aren't training to win the Olympics, that's okay. Just don't lie to yourself about it. If you aren't single-handedly teaching great judo to hundreds of people or developing cadres of future coaches, but simply doing a good job teaching at your club every week, that's still really good. Just be honest about it and don't get upset if no one gives you a twelfth-degree black belt with gold tassels, or if the national office fails to call you back within 13 seconds. You ARE important. You're just not MORE important than everyone else.

FACT: It's just a sport. If you are training to win the Olympics, that's great. You're important, too. You're just not any more important than the people who are in police cars patrolling my neighborhood at midnight right now, or the ones who work in the same building as me and keep the Internet functioning in central Los Angeles. And I bet that a whole lot more people will know if the Internet is down in the morning than will know you didn't win an Olympic medal. 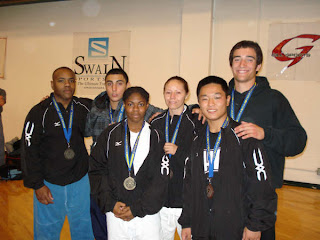