More from Captain Obvious: Being a coach is different from being an athlete 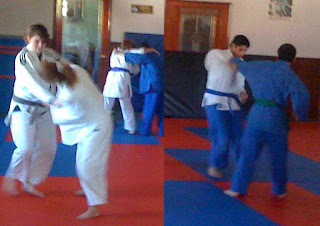 I was extremely proud of our team this weekend. The Reedley tournament is a great one for us to go to because it is not the same people our players compete against all of the time. Also, since they know that everyone comes from far away (because there is not a whole lot that is NEAR Reedley), they go out of their way to put together pools to see that everyone gets several matches, as well as putting together exhibition matches. One result of this is that, unlike a lot of tournaments, there will be more age and weight span in the divisions than our players normally get, more like "the old days", when you fought whoever showed up.

Some of our players were pretty equally matched on age, weight and experience. Haykus, Erik and Harmik went through their divisions with some really, smooth, beautiful throws. (Hey, what's up with that? Do they really like Armenians in orange grove country or what?)

Some players, like Victor and Erin, gave up a lot of weight, but they had experience on their opponents and came out on top. Victor had some beautiful throws, about two feet from his five-year-old son, who, of course, thought his dad was the coolest person in the whole world. (That's another nice thing about small tournaments, friends and family can come right down by the matside and watch.) Christian did not have near the experience as some in his division but he had size on his side, good conditioning and a determination to win on his first trip away on his own. He also had some great throws.


Others, like Yazmin, Crystal and Julia, gave up quite a bit of weight and age and lost a match or two. Every one of them fought their hearts out.

Here is where I saw one of many differences between being an athlete and being a coach. If you are going to be a successful competitor, you need to care deeply about winning or losing. Our players who won every match were happy and those who lost even one match were really down on themselves. At dinner, Gary and I told them, with complete sincerity, how proud we were of each and every one of them. We have both been coaching for a while, me longer than Gary, because, as he emphasizes frequently, I, personally, am older than dirt. One thing we know is that who wins and loses at local tournaments, ESPECIALLY in the younger and novice divisions, has to do with whether you are at the top of the division or the bottom in terms of age, weight and experience. Instead of focusing on wins and losses, Gary and I looked at how much these young athletes had progressed in the past year, particularly with regard to the specific individual goals we had for them.

A couple had been much better at standing technique but their matwork was pathetic. NONE of those players lost on the mat and some of them did not lose at all. A couple had been kind of out of shape, not in nearly the physical condition they should have been in. Every one of our players was physically in good shape. No one was tired out in the match. 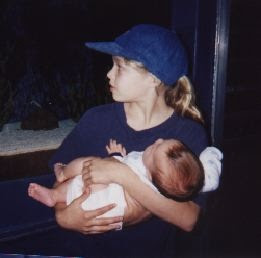 Of course some of them made mistakes, they are young, after all, but they made fewer mistakes than they did a year ago. I have been known to repeat myself, as anyone who knows me well can attest, so here is AnnMaria/Mom lecture #137

"Now that Ronda is winning, everyone is talking about how good they always knew she was going to be when she was young. That's not the way it really happened. She was a skinny, scrawny kid who started judo late. At 12, she was only a green belt. She won one junior nationals and got second in the other. At 13, she was winning most of the time, but sometimes she got thrown in with 15-year-old black belts and didn't even place. No one was talking about her. They were talking about the 15-year-old black belts that ALWAYS won. I saw something different. If she was this close to those players when she was that much younger, smaller, with that much less experience, and very far from physically an adult, her potential was FAR past theirs. When I told people this, they waved me off and said I just was saying that because she was my daughter. They were wrong. What I saw in Ronda was that she was fearless and did not back down. She fought 300 seconds of a five minute match and she never missed practice. I still look for those things and I still don't pay too much attention to who won the junior nationals seven times by 13 years old."

I know coaches who only focus on winning. They would not allow their players to compete in a division where they were out-matched. They keep their players as green belts for two or three years so they can win the novice divisions, or sometimes they even change their ranks from one tournament to the next so they can have an easier division. They'll be a brown belt one tournament and a green belt the next. Those coaches have tremendous records at the local tournaments, year after year. Yet, if you look a little deeper, you'll see that they're not having that success with the same people. I think those aren't very good coaches. Players are supposed to focus on winning. Coaches should focus on progress. Finding kids who are athletically talented or early maturers, holding them back in rank, having them cut weight or move up to be in easier divisions can give a coach a winning record.

You know what, though? Competition isn't about the coach. It's about developing athletes.