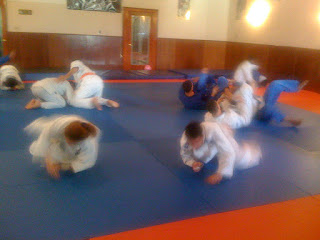 I really wish I had brought the videocamera to practice yesterday so I could show you how our players are training. It probably should not have come as a surprise that Tony, Gary and I all showed up on Saturday with the plan of working on speed drills. After all, we had been watching the same people in tournaments and practice.

Part of the reason I write this blog is to give other people the opportunity I have been blessed to have, that is, to learn from an enormous bounty of really good judo coaches. Today, just a random day standing around at a tournament sponsored by Ogden Judo Club at the Masonic Lodge in Bellflower, Olympian Tony Okada showed up with his club and we were discussing training methods while watching our players.

When Ronda was 12 years old, I could call former world and Olympic coaches like Hayward Nishioka, Jim Hrbek and Tony Mojica, walk up to coaches of Olympic and world level players like Dr. Jake Flores and Gerry Lafon at local tournaments and say,
"Hey, watch my little pumpkin out there. What do you think she ought to be doing?"

The first drills we did I picked up at the coaches clinic I attended a couple of weeks ago at San Gabriel Dojo, with Gerry Lafon and Mike Noriega. We did drills for footwork. We didn't have an agility ladder, so we laid belts along the mat and the players had to step both feet to one side, then the other all the way down, as fast as they could.

Next, I put two belts down, made a circle of each, one next to the other, and had them step in and out as fast as they possibly could, back and forth. The reason for using the belts is if they cross their feet or get off rhythm you end up with the belts being a mess instead of a circle. Then, they did the same drill facing a partner trying to keep up.

We did several more similar drills, then went to timed throws with as many combinations as they could do in 30 seconds. Then, we timed how long it took them to do 10 throws. We did ten-second matwork drills, where one person starts on their back, the other one on top but not touching and they have 10 seconds to win. We did 10-second escape drills where one person starts with an arm at about 100 degrees for an armbar (now don't you wish you had paid attention in geometry?), for the younger ones, they started in a pin. Then, they had 10 seconds to escape.

Next, Tony had brought his music and gave everyone an explanation about why he thought what we were going to do was a good idea. He explained that many people use music when jogging or running on the treadmill to increase their tempo and also focus less on how long until they were done and more on just doing it. He hooked up his ipod to the speakers and played hip-hop music while everyone did moving uchikomis and throws as fast as they could for the length of one song, then switched. Poor Yazmin, my partner, got the longest song in the history of music on her turn to throw. She did not die and got in something like twenty-seven lengths of the mat and twenty-seven throws.

Then, we did 30-second rounds of grip-fighting, two-minute rounds of randori. Every two minutes, we would switch partners, but everyone stayed out for six minutes, then had a round off, as we alternate lightweights and heavyweights. Or, as Tony calls it, midgets and normal people. Erin Butts takes offense at this characterization. Being only 70 pounds and 11 years old, one could say that she resembles that remark. 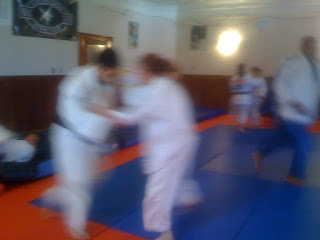 Even though our emphasis at practice this weekend was "Faster!", I have a slow view of development. I am human and sometimes it bothers me when our players don't win, in part because we have put a lot of time and money into this training center, because I am USJA president, a former world champion - I'm supposed to know stuff, right? I know that there are people who wish for me to fail. Some wish for the West Coast Training Center to fail and some wish for the USJA to fail. However, it bothers me very little and for a very short time.

For one thing, we have people wishing for our new president and our economy to fail, and I and what I am doing is so much less important than that, so why should it bother me.

Secondly, I know that for the first five years she did judo, very few people noticed my daughter, Ronda, at all. The guys at the tournament this weekend reminded me about all the Saturdays and Sundays when she was Julia's size that I brought her down to Ogden's Dojo and went rounds of matwork randori with her, made her do throws over and over.

So, I watched the tournament, I saw some great techniques. I learned some things. Hopefully, our players learned some things. I wasn't that happy with how my daughter, Julia did. She placed third, which doesn't really matter, but she didn't fight as well as she can, which DOES matter. I told her that I was disappointed in her and she should do better, she should attack more, try different attacks, more combinations and different grips, that she is too predictable and not aggressive enough and needs to change. The most important thing I told her, that I hope sticks with her forever, was this:

"It doesn't matter if they are bigger and older than you. No one ever has the right to beat you. Ever. You need to want to win more than you are afraid of losing."

That's an important lesson I want her to learn, because I'm not just her judo coach, I'm her mom.

After our serious discussion, we sat on the stage and ate Skittles she had bought from some kid outside raising money for his school.

"Petunia, how come when I told you to do morote gari you didn't do it?"
"Because I thought you meant to do tani otoshi instead but I couldn't get it."
"Why in the HELL would I tell you to do morote gari if I meant to do tani otoshi?"
"I don't know. Just because you're weird sometimes, I guess."
"Oh yeah, well, so are you. Give me some more skittles." 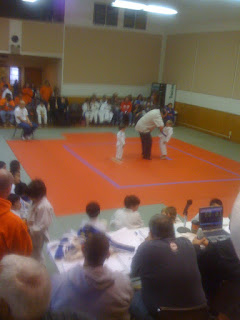 P.S. The referee in the picture above tying the five-year-olds belt is Gary Goltz, USJA Chief Operating Officer.
Posted by Dr. AnnMaria at 11:57 PM