What happened to mutual benefit?

In Spanish, my grandmother called them "dichos", sayings you use to teach the young. Sayings like, "True friends are what make you rich," or "A man's word is his most prized possession."

In judo, we have two "dichos" that are supposed to guide us, often these are repeated at the bow in at the beginning and end of practices. The first of these is :

Whatever happened to that? I have heard a lot of people lately, parents, coaches, adult students, saying,

"I need to focus on my club. I need to give everything to my people, my students. I don't have time to help the USJA, help at local tournaments. I need to devote myself to my players."

Reacting to one such response, USJA Treasurer, Lowell Slavin, from Indiana, said,

"That is one of the most selfish individuals that I ever met."

I thought about Lowell's comment a lot because I truly respect Lowell, just as much as the person he was criticizing. How is it possible to call someone selfish who is working to make other people better?

Speaking to Jeff Miller, from Acadia Judo down in Louisiana, he made a comment that clarified it for me, something along the lines of,

"It can't all be about YOUR club. If all of the other clubs' players quit judo, who are your players going to have to randori with at camps, compete against at tournaments and work out with at clinics? If you don't develop other coaches in your area, where will those other clubs be that put on events that you can attend?"

I understand that we all have limits to what we contribute. Recently, Ronda asked me to help her word an email and I happened to see the list of dozens of emails she had received. Every one of them was asking her for something, to come to a practice, run a clinic, write a letter, teach at a camp. I felt bad for her, because even if she did nothing but respond to these people all day long, there was no way she could have satisfied all of the demands on her. Sure, everyone has limits. You are working, maybe raising a family or going to school, and doing judo. That is a pretty full life.

Still, if it is all about YOU, YOUR CLUB, YOUR PLAYERS, YOUR TEAM, then I think you are a little bit arrogant and a little bit selfish. That magazine, Growing Judo, that comes out every month, people like Adam Stevenson of Wisconsin, Jim Pedro of Massachusetts, Willie Williams and Bill Montgomery of Connecticut and James Wall from Louisiana - they all write articles to make that happen. American Judo magazine exists because of the efforts of Connie Halporn and Ronald Charles. The USJA/ USJF Winter Nationals happen because Gary Goltz and his enormous team of volunteers make it happen.

All of those tournaments you attend - someone keeps score, keeps time, puts down the mats, referees, schedules the building, gets a sanction - and much more, to make it happen. Jack Wada once did a break down of how many people it takes to run the average local tournament in California including pool sheets, registration, weigh-ins, etc. and came up with 73 volunteers - for a local tournament. Every camp, every clinic, the USJA website done by volunteer John Moe of Discover Judo - someone makes all of that happen - someone ELSE.

Do you really, really think you are doing everyone else a favor by showing up with your team? Well, as my kids say,
"Check yourself."

Guess what? Every event, every camp, every clinic, every organization is held up by people who VOLUNTEER. If you are the instructor of a huge club, the coach of an Olympic athlete, there is a big ego trip for you. Your name is at the top of the list on the USJA website, you get to be shown sitting in the coach's chair during the Olympic trials. However, SOMEONE got to the tournament at 6:30 a.m. to put down the mats, even though they have a club, a team, and a family, too. Someone stayed up past midnight to update the website, or like George Weers, to send out the USJA Headlines to thousands of people so they knew about the events.

It is nice that Gary Goltz has the biggest club in the USJA, but I am more impressed by the fact that he is the USJA Chief Operating Office at a salary of NOTHING, a job the other organizations pay many tens of thousands per year to have done. And, then he goes to local tournaments and referees matches between five-year-olds.

As the senior statistical consultant at one of the best universities in the world, I am very fortunate to work with lots of brilliant people in a great many fields on a daily basis. It's nice that Jim Pedro, Sr. coached people to the Olympics,but I see that level of competence in one area or another ten times a week - what impresses me more is that for three years he wrote a monthly coaching column for Growing Judo and he has taught clinics all around the country.

Those people who are all about MY club, MY players, MY team, MY kids ....

In the Bible, Christ says that those who openly give to charity, who sacrifice for the church and moan about it have already had their reward on earth, so there is no need to reward them in heaven. I may be mixing my metaphors a bit here, but I think if it is all about you and your team, there is not so much mutual benefit going on. 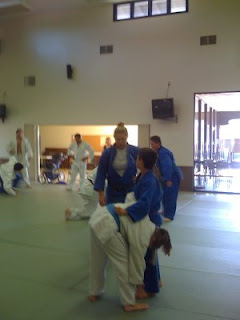 Pictured above - Ronda teaching at a camp in San Diego. One of the kids was her little sister, the other 34 people on the mat were not from her club, and after practice she drove 90 miles to be at work at 6 p.m. Olympic medals are nice. Being a good person is better. If my grandmother was still alive she would have a dicho for that.
Posted by Dr. AnnMaria at 9:45 PM