AAU Grand Nationals: A is for Awesome 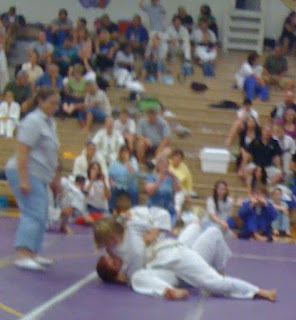 It was a great time at the AAU Grand Nationals. First of all, before I went, I got to see my family, including my cousin Mike's wedding, an unreasonable number of aunts, uncles and cousins of the first, second and twice-removed variety. One of the coolest was my niece, Wendy, who had her hair in a very GI Jane type of shaved-head style. I thought it was just the latest strange fashion until the reception when it came out that she had auctioned off shaving her head for $2,000 donated to a charity for children with cancer. She teaches English at a high school, the students ponied up two grand and hence Wendy has a shaved head.

If you all think I am going to shave my head for money donated for USJA Development, you can all forget it.

The tournament was great. I really like the way the AAU rules run. There were almost no penalties but a lot of instruction. For example, in one match the referee says to the player "You grabbed inside his sleeve", as she demonstrated the grip, "don't do that again."

If after instruction the player still persisted then he or she would get a verbal warning, and after the second warning a chui (two shidos). There was not a lot of concern over what people were wearing. No one measured gis. I did not see any illegal gis in terms of being too short according to the rules. Some looked too long to me. Some people wore a blue pair of pants and white top or vice versa. No one cared. It was judo, not a fashion show. Ronda would have felt right at home.

The judo was very good and there was a lot of it. There were about 200 players,mostly adults. There was a good number of female competitors, including 1996 Olympian Corinna Broz West. She not only competed but she had a table selling her artwork. Talk about multi-talented.

The AAU is a growing organization and I had the opportunity to talk with Steve Scott and Norm Miller at length about how we could cooperate. One decision, supported by our coaching chair, Jim Pedro, Sr. , is that AAU could offer our coaching curriculum if they would like and,assuming it is the same curriculum and approved instructors, we would have a reciprocal agreement like we do with USJF. AAU clinics could also be submitted for approval for continuing education. This would make more educational opportunities available to our coaches and players in the Midwest.

The day after the tournament, we did have a coaches clinic with coaches from Texas, Kansas and all over Missouri. Again, I was extremely impressed with the quality of judo done by all of the coaches. Incredibly, Steve Scott who started Welcome Mat Judo Club has now fathered THIRTEEN Welcome Mat judo clubs around the area. THIRTEEN of his students are now running their own programs. Everyone should be studying him and seeing what he is doing. 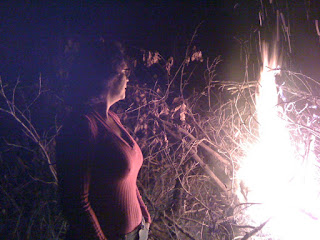 My sister (that's her above giving me the lecture) insisted that I must sit by a bonfire and not work all evening. She believes that bonding with nature and doing nothing will benefit me in some way I obviously failed to comprehend.

It was nice to see everyone and I am sorry Julia missed the bonfire and the fireflies but I am sure she had a great time with her grandmother and cousins.

Judo tip - more a suggestion - if you live in an area with a lot of black belts, I think once every few months the instructors should schedule a 'no students' workout and get together. There should be 90 minutes of people just showing each other drills or new techniques that they have been thinking about. This should be followed by 90 minutes of beer-drinking and swapping lies about how good and good-looking we all used to be.
Posted by Dr. AnnMaria at 8:58 PM

AM, it was great to see you there, and I agree, it was an awesome tournament. Very refreshing. I am sorry that we didn't get to stay for your clinic, but I am sure it was great. Best of luck, and lets record another podcast soon!

Check this out AnnMaria, BJA is will be setting up an Iphone App. I did notice the iphone apps are now available for BJJ fundamentals