Judo: Home of the Angels 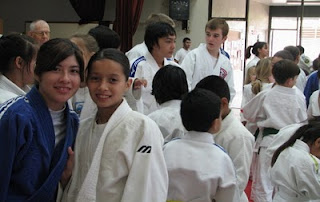 It's important to keep in mind why we do judo. There is the physical benefit. No one wants to end up old, obese and feeble. There is the self-defense aspect. Certainly judo is a better self-defense than say, curling or luge, unless perhaps you are attacked by people who slide large stones at you or are at the top of a mountain.

Then there is the social aspect. We were driving home from practice tonight and for some reason Ronda and I started listing the genuinely good people we knew in judo who had helped her, who had taught her one thing or another and who honestly wished the best for her, as a judo player and a person, win or lose.

Often, as judo instructors and coaches we say, sincerely, I believe, that we are doing this to give back, doing it for the kids, etc. What exactly are we giving back?

In part, we are giving back some of the kindness, generosity and attention that has been given to us.

As president of the USJA, I get more than my share of complaining emails, some about legitimate concerns and others about everything from the color of someone's gi to the tone of their voice. It would be easy to get caught up in this and discouraged.

HOWEVER, I am privileged on a daily basis to meet, observe and talk to people who have been giving enormous amounts of themselves to judo for years. Jerry Hays, for example, who took these pictures, as he does at so many judo events. He also sends out a daily Judo News, an activity he has done for years. Jerry also coached the U.S. Navy Team and coached at the Naval Training Center for many years. 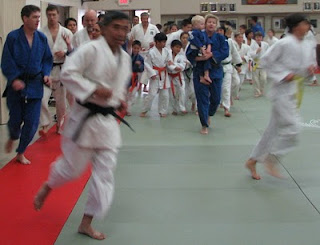 When I looked at the pictures from the ashi-waza camp, I saw SO many people that I had seen over and over and over through the years, Kelly Barnes, Roland and Sarah Fernando, Ernie Matsubara, Terry Kunihiro, Paul Nogaki, Bill Caldwell.... it's a really, really long list. When I look through photos Jerry has taken, I see Ronda cropping up repeatedly, and I am proud of her for that. She is turning into a very good teacher.

There are others who were not at the camp that day but are the same type - Deb Fergus, Bob Treat, Martin Bregman, Roy Hash, Jim Pedro, Hayward Nishioka, Jim Nieto, Ernie Smith and others flying in from Michigan, Oklahoma, Texas, Connecticut, Massachusetts and all over California to help with the All-Women's Tournament and coaches conference in Las Vegas. There are the Las Vegas folks themselves like Mike Couchigan and John Weiner volunteering to put down mats, take registration. What all of these folks have in common is that they have been helping for twenty, thirty or FORTY YEARS. I remember Martin, Jim, Hayward and Ernie from when I was competing 30 years ago. They were refereeing and coaching then and they are doing it now.

We have others, like Kelly, like Kala, who have come up in the last ten or twenty years and are joining the ranks of the tireless workers, the enthusiastic supporters.

These people are why I do judo. They are good role models and their goodness is contagious.

That isn't to say I don't get irritated from time to time. The check for the referees' and clinicians' rooms had not reached the Palace Station Hotel (I don't know why, it was mailed), so I had to give them my personal credit card to guarantee them all. I am getting up at 6 a.m. to drop Ronda at the airport and go to work. I have to get to work early because I fly to Denver after work so that, along with our corporate counsel and chief operating officer, I can meet with a mediator the next morning regarding all the issues with USA Judo. I'll edit Growing Judo on the plane on the way there and back.

Just as I was getting ready to go to bed, at midnight, I read a couple of emails from people chastising me for not spending enough time on the USJA. One person even said that if I did not pay so much attention to my daughter I would have more time for the USJA! 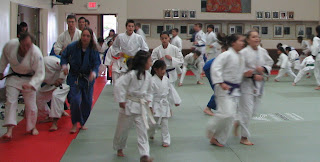 Why I keep supporting judo, teaching judo, promoting judo,is I think of all of the angels involved. Those who work tirelessly behind the scenes for decades. YOU are why I am here, and I hope that, in some small way, I am why you are here, too.

My grandmother told me years ago,

"Some sow, others reap. If you have to make a choice, sow!"

One of my smart-@$$ cousins added,

"It's kind of the difference between being a farmer and being a locust. Nanny's saying if you have a choice, don't choose locust."
Posted by Dr. AnnMaria at 10:53 PM

"One person even said that if I did not pay so much attention to my daughter I would have more time for the USJA!"

First, what is that person doing for USJA or for that matter, Judo?

Second, Ronda is your daughter forever, your title as president is for a term and you've been re-elected I think, so the members think you're doing a decent job or you paid off, threatened, blackmailed, etc. the members as the anonymously quoted person above might suspect.

Third, what is it that the anonymously quoted person above wants from you that s/he cannot do themselves or get somebody else to do?

I've noticed that in life, complainers will always find something to complain about. There is nothing more that they live for, otherwise they would focus on solutions instead of looking at the "problem," doing nothing and expecting somebody else to fix it.

As you've shown by listing the people who've had a positive influence on your daughter throughout the years, there will be many more, from the youngsters at your camps/clinics and the West Coast Training Center to the old farts who can no longer go hard at randori to everybody in between, who will include your on their list of people who've had a positive impact on not only their Judo, but more importantly, their lives.

You're so right. I always remember the tournament director who told me, "You can't please some people. If you paid everyone $100 for showing up at at a tournament those same people would complain it wasn't $200 or they didn't get their $100 fast enough."

I've found that a lot of people like to sit on the sidelines and critique but few have the courage to walk down the path of righteousness to achieve their goal. The real win is the one person whose life you changed not the ten who complain.

Joe C
Thanks for the words of wisdom. You are absolutely right!