Practice Matwork as if You Want to Win a Tournament 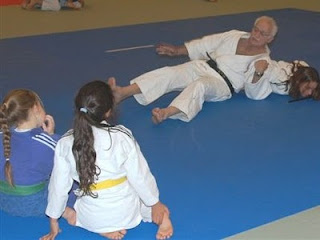 Judo tip of the day from Jim Pedro, Sr. - practice judo the way you intend to do it in a tournament.

This may seem obvious but when you think about how most of us practice matwork, including me, we do two or three minute rounds. Sometimes five or ten minutes if we are really studly awesome. However, that doesn't really make sense. When you think about it, in a tournament, the referee will give you twenty seconds to make progress on the mat, if you're lucky, and then make you stand up.

[Hint: Your definition of making progress and the referee's is usually going to be different, because YOU are biased in your own favor. Yes, you are. Be quiet.]

Jim commented that he had noticed this tendency not to allow matwork seemed to be becoming even more pronounced lately and so he was changing the drills at his club from 30 seconds to 20 seconds. The players have 20 seconds to get each other in a pin, choke or armbar. Then, call matte and make them re-start.

This seemed such a good, obvious idea that I decided we were going to adopt it at the training center starting with practice on Saturday. You have been warned. Show up.

Incidentally, for those of you in graduate school, what Jim is demonstrating is referred to as Thorndike's Law of Transfer,

"The theory suggests that transfer of learning depends upon the presence of identical elements in the original and new learning situations; i.e., transfer is always specific, never general."

I would have asked Jim if that was what he based the change in his drills on but every time I ask him something like this, there is a long pause, during which I can hear him thinking, 'What the hell planet do you come from?' followed by,

This is also a good argument for following every throw with 20 seconds of matwork.

Or, of having a period in practice where it isn't quite randori, but it is throws, transition and 20 seconds of matwork.