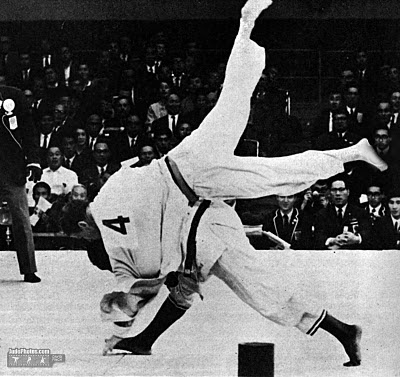 George Harris passed away last week. As most people know, he was a member of the 1964 Olympic judo team.

I've met plenty of world and Olympic competitors, in judo and other sports, but George stands out. Over the last few days, his name has come up every time I talked to anyone who knew him. Every single person agreed,

"I never heard him say an unkind word about anyone."


He was no pushover, as you can tell from the photo above (thank you to David Finch of judophotos.com for making it available). He was nice not out of weakness, but out of goodness of heart.

It is truly hard to make an Olympic team. It's even harder to be a genuinely good person for eight decades. He will be sorely missed.
Posted by Dr. AnnMaria at 9:41 PM

I'm ashamed to say I didn't know who he was. Thank you for introducing him. He sounds like a remarkable judoka and human being.

Your article on TechCrunch. I'm an Asian, and I want you to start reading all the comments there.

Many thanks for supplying these kinds of really helpful tips. Congratulations are in order upon being an exceptional blogger.

George was a friend for half a century and will be missed. A nice man and Judoka too.

A lot of effective data for myself!

Your article on TechCrunch. I'm an Asian, and I want you to start reading all the comments there.