I didn't get around to uploading and editing the Sneakerdoodle Zebra Judo episode on set-ups but fortunately, I remembered that the last time I was talking to Jim he brought up a few points that made me say


"Stop right there! That's so good, I'm going to put it in the book. Say it again so I can write it down."

Even more fortunately, I found the scrap of paper I had scribbled my notes on. 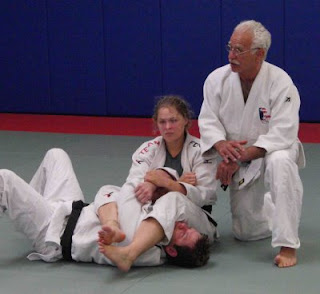 My first question was whether he thought combinations in matwork and combinations in throwing were the same thing. For example, when I do my combination from tate shiho gatame (somebody told me that's called a mount in ju jitsu) to a juji gatame armbar, is that the same as practicing, say, a combination of a forward throw like a shoulder throw to a backward throw, say ko uchi? His answer was yes, (except it sounds like this "Yay-es" because he's from Boston and they talk really funny). I agree, I think they are exactly the same principle. It's too bad that very few people practice standing combinations and almost no one practices matwork combinations and if you tell me you practice them all of the time you are either a liar or you suck because if you practice these so much how come I never see you doing them in competition?

My next question was whether there is a difference between, fakes, set-ups and combinations. He said,

They're all just different words for the same thing.

I was surprised by that answer. I told him that I knew coaches who did not teach combinations because they were concerned that their players would not really make a serious attempt at the first throw, and half-ass attacks are a lot more likely to get countered than real ones. I have said this so many times I am just going to have it recorded and play on a continuous loop in the dojo.

To me, a set-up is, for example, me doing a foot sweep with my right foot against your right leg, and causing you to plant most of your weight on your right leg. Then, I follow that up with o soto gari (major outside reap) against your right leg. The foot sweep is hard, but my intent is not really to throw, just like when I pin someone with tate shiho my intent is not really to pin them. Jim told me I was doing it wrong then because I was letting go of the pin for the armbar and that's just stupid. That would be stupid, so let me clarify, just in case anyone else thinks I meant that.

So, I do agree with Jim there, it's stupid to give up a sure thing (a pin) to try for a potential armbar. Just because it's stupid doesn't mean I don't see people doing it all of the time.

Anyway ... here is the first point I thought was so useful that I wrote it down:


These are all the same thing, whether you call it setups, combinations or fakes. It's all one and the same concept - anticipation. In matwork, anticipate at any time, in any position, where you are going to go next. Anticipate where the person might go if you're losing the pin. Standing, it's the same thing, you anticipate where the other person might go if you don't get the throw. I believe so strongly in this that I have them do it every single time we have practice, six minutes of combinations, continuously, every day. Four rounds of ninety seconds. I make them do it every day, every practice."

At first I debated on whether I should put that last part here, but then I did, for the same reason in my business when you ask me to sign an NDA (non-disclosure agreement), I write you off as clueless.  I's not the idea that is valuable. It's the execution. The actually doing it. Now that I have told you this about combinations, a large percentage of you will forget it, another large percentage will not consider doing it because you concluded long ago that everything you are doing is exactly fine because you are so awesome and a somewhat smaller percentage will remember what I said, plan to do it and then drink another beer. All except Joe from Idaho, but he's snowed in and can't get to judo. Sucks for him.

By now, Jim was really on a roll, and he went on,


"The other two things to emphasize besides combinations are kuzushi and transition. Emphasize transition for Christ's sake. You go to all of that effort to knock somebody down and then instead of transitioning into matwork you let them back up and give them a chance to throw you and win the match. Is that stupid or what? If you knock somebody down JUMP ON THEM. So, I say this and what do they do? They jump on them! Literally! Can you believe that? So then I have to say, 'Don't just jump on them! Do something specific!' It's all the same thing all over again, anticipate what the person is going to do next and having a response to that. "

At this point, it was really getting interesting and I would have liked to have written down more but while I was on the phone, Ronda had come home and was all excited about her new Mizuno fighting outfit that she wanted to show off. She began by jumping up and down and when that failed to get my attention she sprawled across the kitchen table and feigned her own death. Still unsuccessful in getting me to hang up, she began to demonstrate her new and improved striking techniques on all of the kitchen cabinet doors, leaving them considerably worse for wear. So, I had to get off of the phone and remind her that even though I am very small, so are most of the things that can kill you, like viruses and E. Coli, a fact that would be demonstrated in a variety of ways if she did not quit destroying the kitchen. On the positive side, I guess when she becomes the Women's MMA grand poo-bah woo-hoo-shidan or whatever the hell they have, I can sell the cabinet doors on eBay, holes and all.

P.S. I just want to throw in here another point, one judo crusader, Dr. Rhadi Ferguson made the last time I talked to him about judo, which is that women are more flexible than men, and moves like that tate shiho (mount) to a straight armbar when they have your leg scissored are easier and more likely to be done by women. I was both impressed that he thought this way and amused that he thought it necessary to tell me. After four children, I have that difference between boys and girls thing pretty well figured out.
Posted by Dr. AnnMaria at 11:03 PM

This is one area where wrestling helps, in that the throwing part of wrestling (take downs) exists to transition to pins.

Thank you for this post, really effective piece of writing.