Now Aren't You Glad Mom Made You Go to Judo? 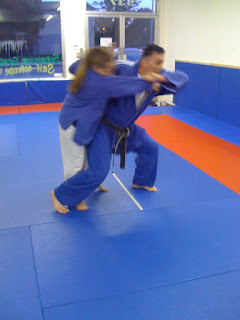 Julia was very pleasantly surprised, but she commented,


A lot of the other girls have more tricks than me, I mean, they know more what to do with the ball, but I never feel like I can't keep up with them. The running during practice, the drills, it just isn't that hard. I don't know why people complain about it. (Her friend..) tells me that the select teams are harder, people push you more, you have to be aggressive, but I'm not worried about that.

And you've done a lot of hard practices so you know you can make it through practice no matter what, no matter how hard it gets. And now aren't you glad Mom made you go to judo? Remember all of those times when she used to tell you that even if you didn't stick with it and you decided to do another sport later on, that it would be a good basis for whatever else you decide to do? She was right, wasn't she?

I couldn't have said it better myself.
Posted by Dr. AnnMaria at 1:03 AM

I prefr to spend my money in fancy cloths instead this stuff!