It was a good day. Crystal hit me in the mouth. 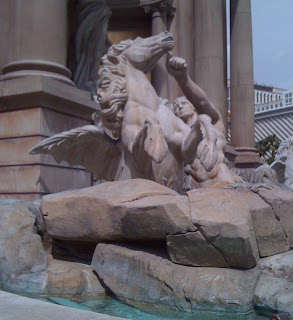 Work has been interfering a lot with judo lately.  I spent most of this week at a statistical software conference at Caesar's Palace. Yes, I know, it's tough work but someone had to do it.

Finally, I got some time to go back to judo and was at three practices over the last two days.

Today was fun. First, I was at Gracie Barra Corona at a seminar hosted by Tom and Holly Reusling to raise money for Japan Red Cross. Paul Nogaki and I did one session, followed by someone who probably is very well-known if you are really into jiu-jitsu. Let's call him random Brazilian-looking guy number 6.  Later that afternoon, Israel Hernandez and Val Gotay gave another judo session. All the clinicians donated their time and the money raised went to the Red Cross.  As Holly said, even if each of us alone can only do a little bit, that's no excuse for not doing that little bit and helping out when we can.

Paul taught some basic points about center of gravity, both standing and in matwork. He also did a nice drill for when you have a competitor who is bent over where you pull the opponent down more. This is an uncomfortable position and he/ she will try to stand up straighter. Do this a couple of times and the third time, as the opponent comes up, help him or her up by pulling up and entering your throw. I meant to do that drill at the West Coast Judo Training Center , but by the time I got there an hour later, I had forgotten.

At the training center, we worked on being a little more intense. If you have people go for twenty minutes of matwork, they pace themselves. Instead, we had three person groups where one stays out and then each of the other people in their group went with that person for a minute. Then, everyone got a one minute rest.  Then we started all over again. The person in the middle goes two minutes with a one minute break. Because the other people in their group are only going one minute with two minutes off, they are fairly rested. Because their opponents are fairly rested, if the person in the middle slacks off, he/ she gets pinned, choked or armbarred.

There was a slight problem in the group I was in because every time it was Gary's turn to jump in and go with Crystal he would say, "You take my turn, I'm on the phone."

Somewhere in here, Crystal hit me in the mouth and I have a cut lip. This is usual, every time I do matwork with her. What is it about teenage girls? I remember when Asma Sharif was at Mojica's when she was a teenager and she could NEVER hit the crash pad. Everyone else, when they were doing throws it sounded like this,

As the people in the line hit the crash pad. When it was Asma's turn, it sounded like this:

Asma did not throw people off the mat on purpose, any more than Crystal hits me in the mouth every time we do matwork on purpose. Part of the problem is that I fight with my face, which is something I learned from Miguel Tudela back when we were all at Tenri Dojo in the 1980s (yeah, and we all had that crazy hair, too.)  Miguel would put his face on your chest to hold you to the mat as he stepped over your legs or hold your arm down with his head as he used both hands to pry your leg off of his leg. As a result, Miguel usually came out of a match with his face looking like hamburger meat - but he made the Olympic team for judo, won the U.S. nationals a few times and made the Panamerican Games team for sambo wrestling. Good times.

After we did the drills with matwork, we did the same three person drills with gripping and then with throws. Yes, the same people were out the whole time. My reason for this is two-fold. First, the people who are a little older and little more advanced should be worked harder. Second, practice should not run the same every time. This isn't the movie, Groundhog Day.

Speaking of Gary, which we were a few paragraphs back, the funniest thing that happened today was when he went into a throw that he does over the arm (soto makikomi, for those of you good at Japanese names) , stops dead in the middle of it, re-adjusts and throws me. He stopped because when he aimed for where the lower half of the arm would be on someone his size he missed because there was nothing there.

He thinks I didn't hear him mumbling under his breath about how could someone not have any more arm than that and midgets but I DID hear him because I am small, not deaf.

Since I worked out twice today and once yesterday, I now have a cut lip, mat burn on both hands and probably a few random bruises. I have a sneaking suspicion that this is not how other grandmothers in their fifties spend their weekends.

Since I think that I haven't commented before, first I'll say that I love both your Judo and Statistics blogs, due to studying maths and training in Karate, which is not Judo, but your posts are entertaining, and pretty much every 'Judo tip' you give is very useful for applying to karate training too. Anyway. *shrug*

I thought I'd let you know how amused my mum was by your last paragraph-she's 57, started karate a couple of years ago, and came home from training this weekend with a split lip, and trying to figure out where several bruises came from!