Ronda Rousey at West Coast Judo Training Center: Is this a story? 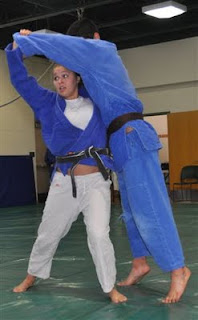 Someone told me that I should write about Ronda teaching at the West Coast Judo Training Center.  He said that we take her for granted and there is not another place on earth that you can come learn from an Olympic medalist who has been ranked top in the world in two different events just by popping in the door and paying ten bucks.

I was surprised by that suggestion because it didn't seem particularly noteworthy to me. She's been teaching there on and off since it began, first in Industry, in the old Guerreros Dojo site, thanks to Frank Sanchez allowing free use of his facility, and now in West Covina.

He pointed out that Ronda was ranked number one in the world as an amateur in mixed martial arts and that she won her first professional fight in twenty-five seconds.

Ronda is a very good judo player. I guess she's good at that punching, kicking, biting, eye-gouging, elbowing, spitting and whatever else that mixed martial arts stuff is, too.  She really is a good teacher.

He also pointed out that since next Sunday is Easter, we won't be having practice (no, duh) and Ronda had to work doing physical therapy for dogs last Sunday (I'm not kidding) and that May 8th is Mother's Day, this is one of only two times in a month that people can come to a practice she will be running at the training center.

It's not that we don't recognize and appreciate all of the accomplishments Ronda has had. It's just that for kids like Julia who have been coming to practice with her there since she was four years old. it doesn't seem much like remarking on. 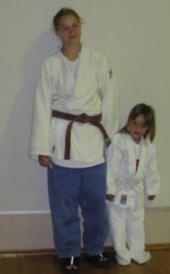 I did remember something today that did make it noteworthy and motivated me to follow this suggestion and write about it anyway. Years ago, Sus Kono, who is the fabulously brilliant instructor of Valley Judo Institute in Sun Valley advised me,


"You need to invite people to come to practice. "

When I protested that I didn't need to invite people to practice, that OF COURSE, everyone was welcome, he responded,


"Yes, but they don't KNOW that. You need to invite people to come."

Over the years, I have learned that Sus is right about that and almost everything else he ever told me, too.

So, yes, Ronda will be running practice tomorrow starting at 3 pm. She is a great athlete, great teacher and doesn't call her mother often enough. Sensei Richard (Blinky) Elizalde will be there, too, and yours truly.  Blinky is a terrific technician and an excellent teacher. I don't know how often he calls his mother. If she is still alive she must be really old because Blinky started judo back in the 1960s. I'll be there, too,  and I don't particularly suck at teaching, either. I might have to duck out early to go to mass because it is Palm Sunday.

Everyone is welcome to come. If you want to have a good hard work out, learn judo or grappling from Ronda (or Blinky or me), just show up. Take the 10 to Vincent. It's where the West Covina Mall is. Go south about a mile to Vine Ave. On your right you'll see Hongkong Plaza. On the left is a strip mall where you'll find the West Coast Judo Training Center. There is also a dog grooming place next door that has a sign outside that says not to pee on the sidewalk. We weren't going to anyway so I, for one, find that sign unnecessary.

Oh, and Sus real name is Susumu and if you are thinking of making fun of him because he has a name like in that song, "A boy named Sue", don't, because he can kick your ass.
Posted by Dr. AnnMaria at 11:13 PM

I hope more and more people train at your place. If people want to improve their game, they need to pack a sleeping bag and spend the weekend at there !!!
I just got back from working in Detroit. I want to check out the new place.

all the best- chris

I think nowadays is necessary to train ourselves, because the insecurity and vandalism is everywhere, and we are not safe without any train like this one..