Judo the gift that keeps on giving

Matt D'Aquino asked on his blog the other day, "Do you even like judo?" In answering his question of what I like about it, I realized that my answer is very different than it would have been 25 or 30 years ago.

Back then, what I liked about it was I could do amazing things. I loved matwork where I knew where my opponent was going to be before he or she did, because I had drilled those moves so many time they were reflexes. I loved being able to do physical things almost effortlessly - everything from lifting an opponent my weight off the mat and turning her to spinning into an armbar. 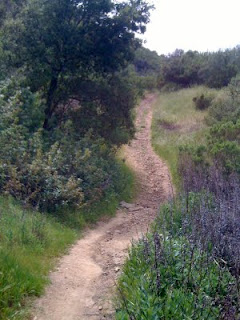 Winning is awesome, too - standing on the podium, seeing the American flag go up, hearing the Star-spangled Banner play  - all of that rocks.

Fast-forward twenty years or so (emphasis on the "so") and those amazing things are not nearly as amazing. Unlike some former elite athletes, I don't fool myself about the decline in my physical abilities. I'm not as strong, not as fast. I know that part of that has to do with spending more time in the office than in the gym, but part of it, like wrinkles and gray hair, is just getting older.

Having competed for 14 years and then worked out, coached and taught judo for another 26 years after that, one thing I have gained just struck me yesterday, when I went for a 12 mile hike in the Santa Monica mountains just because I felt like it. I passed less than a dozen people in two hours, either on the way up or on the way down. One of them looked to be my age, one was about ten years younger and the rest were all at least twenty-five years younger.

I was amused when I heard a group of four college students coming around a bend. One was saying,


"They say you graduate, get a job and then you go on to have a good life. Who do they think they're fooling? Our lives will never be better than they are right now. Whenever else are we going to be able to go hiking six miles up on a beautiful day. We'll be old!"

His friends all made sounds of agreement. Not sure what they thought when our paths crossed a few minutes later. They did look surprised.

I travel a lot and almost always take half an hour or an hour to go to whatever health facilities the hotel has and swim or run on the treadmill or do something. Usually, the other people in the place are like me, business travelers in their mid-forties to mid-sixties  - but they don't look like me. I mean, they REALLY don't look like me. (It's not that I'm checking out the other old ladies in the locker room or anything, really, I swear).

Yes, we all have the same gray hair and wrinkles - in fact, I have more, because I've never been in the whole Botox - plastic surgery crowd - but I still wear the same size I did when I was 21 years old (evidenced by the fact that my daughters in their twenties keep swiping my clothes). 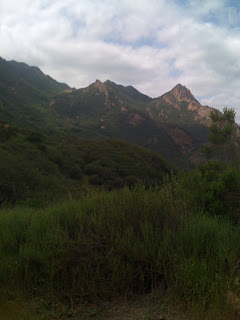 There are times I think the hell with it, why bother working out, I mean, it's not like I'm competing or clubbing or any of that. But then there are days like yesterday when I realize that there isn't a single person I know my age who could have walked up that mountain just for fun .

When I think back to all of the people I knew as competitors, those who were in outstanding shape for their age in their twenties are also in outstanding shape for their age in their fifties and sixties. That doesn't mean they are in the same shape. Let's not be delusional. I may wear the same size jeans but I certainly can't lift the same amount of weight or whip off hundred throws in the same amount of time. I'm older, but I'm an older person with much greater capability BECAUSE of the years I spent doing judo.

My youngest daughter began judo when she was four years old. She practiced pretty regularly until she was eleven and discovered soccer. Now she plays soccer several times a week. This week she was giving advice to her friend. I am not sure what in her thirteen years she has done that has qualified her to give advice on athletic training but she certainly believes she is qualified, for whatever reason. 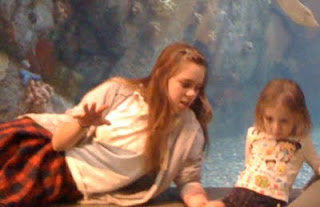 "I think judo is good because it helps you in whatever you do. When I started gymnastics I was stronger than the other people who just started and not afraid to fall when we did the vault. When I started soccer, I was in better shape for running and not afraid of people running at me. Even in dance class, when we needed to dance for three hours and it was harder than people thought, I didn't get tired. "

I was thinking about all of this today as I was working on the next chapter on our book. The section I am working on now is on physical conditioning.  After being stuck for a while, I like how the book is coming along. Even Jim was happy with the latest revision and he usually hates everything. I think what I like about this section is that it could be useful to help a lot of people. There aren't many possible scenarios I can imagine in life when it is better not be physically fit than it is to be able to hike up a mountain just for the hell of it and out of curiosity to answer the question of what kind of flowers grow that high up.

So, that is what I like about judo today. 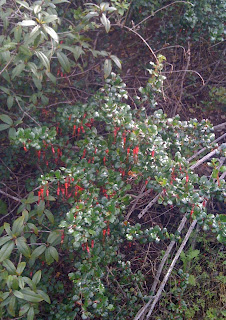 And the answer to the question is  - this kind, whatever they are. The cool thing is, there is some kind of flying bug that looks just like one of those flowers, that hangs out on them. You look at the branch for a while and then all of a sudden one of the flowers will detach itself and fly away. It was super-cool. Unfortunately, I said I was in good shape, not a good photographer, so I don't have a picture of it.
Posted by Dr. AnnMaria at 3:10 PM