Matwork secret #8: Don't give the opponent time to escape

A person does a throw and lands on his side, at the side of the other person. For a side four corner hold down (called yoko shiho gatame in judo, a side mount in jiu jitsu), all you really need to do is turn on to your stomach, as shown in this photo. This is a photo of Ronda landing in a pin. 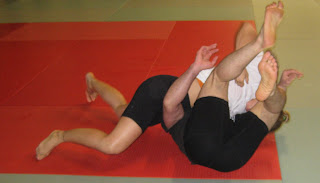 Her opponent hasn’t completely hit the mat yet, his legs are still in the air and not only is she already in the pin, but you can see that she is already moving her right arm to make the pin tighter. To make the hold tighter, move your top arm under the person's head and hold tightly, so he can't bridge. If the person is wearing a gi, you can feed the lapel of the gi into the hand under their head to hold tighter. Since Manny is not wearing a gi, Ronda is going to slide her right hand under his shoulder.


Do people throw into a pin? Generally, no. They throw, then let go, and try to get on top of the opponent, of course giving the person time to escape. Whether you go to a club that does grappling, jiu-jitsu, judo or MMA, you’ll often see the same thing.
There are two reasons people do such an illogical thing. One is that they aren't used to thinking of a match as one connected whole, because they don’t practice that way. We already discussed that on this blog before and the solution is simple. Practice going straight into matwork from your throws. The other reason I bring up here a lot is that must people have a very limited arsenal of matwork techniques.
(Oh, and speaking of Ronda, please vote for her for female fighter of the year . )
Posted by Dr. AnnMaria at 8:51 AM

RE: About Me Profile

You come across as being very arrogant and full of pride. Most people that are comfortable with themselves do not boast in vain.