Do a half-nelson, damn it!

It has never made the slightest bit of sense to me that so many judo players who wrestle in high school and college forget wrestling once they put on a judo gi. Some of them are really good wrestlers. One technique I cannot believe that every judo player does not know and use is a half-nelson. Here is former Marine Corps wrestler and West Coast Judo Training Center coach, Gary Butts, demonstrating on his fellow WCJTC coach and head instructor at Ontario Judo, Victor Ortiz.


The first thing to notice is that Gary has his weight on Victor. He is reaching around Victor's waist to pull him closer and put even more weight on him.  At the same time, he has his left arm under Victor's arm 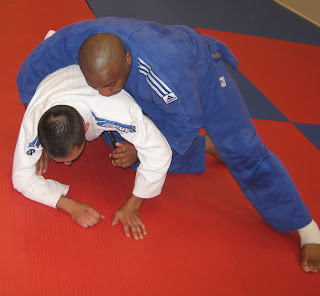 Notice how Gary shoots his left hand through and is grabbing his opponent's neck. 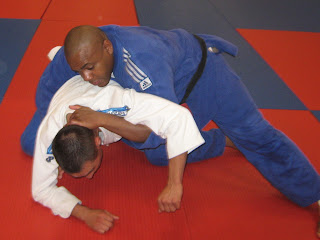 As he turns Victor, Gary pulls his right arm back and shoots it through underneath to grab Victor's bicep. 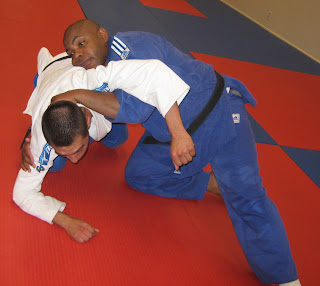 You can see below that Gary continues to crank on Victor's neck with his left hand as he pulls the opponent's arm in toward him with his right. Notice how his weight is STILL all pushing against Victor. There is no space between the two of them. Also, you can see in both photos that Gary is driving against Victor with all his weight. Notice how he is pushing off of his left leg. 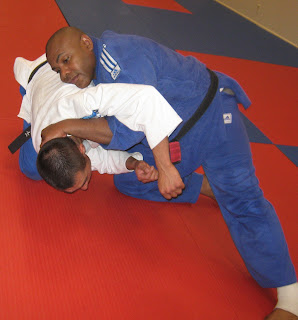 The half-nelson finishes with the opponent on his back, pinned with yoko shiho gatame (what jiu-jitsu players call a side mount). 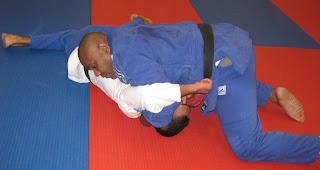 Now I know that anyone who ever wrestled learned a half-nelson and I see lots of judo players who are successful wrestlers get in the same position that Gary was above and they never try this move. It is just ridiculous. Cut it out! Do a half-nelson, damn it!
Posted by Dr. AnnMaria at 9:01 PM

If I was the player in the white gi, I would find it fantastic that the right hand my the player in blue gi was across by back. I would roll to the right and have him pinned in no time.
If you want to do a half nelson, start by grabbing under the armpit, the back of the gi or the belt of the white player controlling with your right forearm and elbow.

Jorge, if it was that easy, you'd be able to roll anyone if they did that. It's a nice idea, but blue would have to be clinging a little deeper. I think either the way shown or grabbing white's right arm from underneath and keeping it tight to his body are necessary to make sure they don't post out.

Jorge -
I do it the way you say, but other people do it the way Gary does it. Notice two things that he is doing that would make it really difficult to roll him (because, believe me, the possibility has occurred to him).

First of all, he has white pulled TIGHT against his body. For you to roll him, you need to roll to your right but if he has you pulled in tight to your left with all of his weight leaning on you, that is going to be really hard. Second, notice that he has his left leg FAR out from Victor's body. If Victor rolls to the right, all Gary needs to do is flatten out on his stomach and Victor is pinned.

One reason so many people don't do the half nelson is that they get caught by the immediate counter once (before they get the rest of the technique down) and give it up as dangerous.

But, like everything else, it has a good place when done right.

When I cannot roll then to the right, I do like a tani-otoshi on the ground and end up in the same position as if I had rolled to the right.

This is always dependent of the skill of the other player and how good they are. I had some good mat players grabbing across my back and I was unable to roll or pin them.

I think trying to put your opponent in a "half-nelson" gives your opponent too may ways to counter. Once the person reaches around your back, he's giving you his leverage - enough to sweep him. If his hand is reaching over your back, towards your wrist, you can lock his arm as he reaches for your wrist by pinching your arm to your side; basically locking his hand in your arm pit. Keep in mind, when your opponent is reaching over your back, he's not putting his weight to the side of you - he's dropping his center, or playing his chest on your back, giving you enough leverage to sweep him. So, at that point, he wouldn't be able to go for a half nelson, and he'd be getting swept. This is actually a very easy technique, and I'm known at my gym for hitting it all the time. If you really feel the need to reach around to the far side of someone's back, pin their ankle with your knee - then they can't roll. As for your opponent taking you off balance when you're trying to roll - you forget in the turtle position you have two of your legs you're able to push off of to create enough momentum to roll and hit the sweep. Yes, when hitting this technique, does it have to be done quick - well certainly... but the same can be said about the time your opponent has to sink in his technique.

I practice the exact same counter you described. We do a drill where when I say "Reach!" the person on the bottom has to catch the arm as the opponent reaches out with an arm. You are right in that accomplished players will not leave that arm on your back very long nor will they reach out very far. The challenge is for the player on the bottom to come up a little bit and snatch the arm as soon as it gets anywhere remotely close.

Jim Pedro, Sr. says the same as you. He does not like to do the half-nelson when the player is on all fours because it is too easy to counter. His preference is to use it for players who are on their face. That happens a lot in judo, even with adults, where they just lay on their face, tuck their arms in and have their legs spread out.