Smart Coaching: Caring that you know 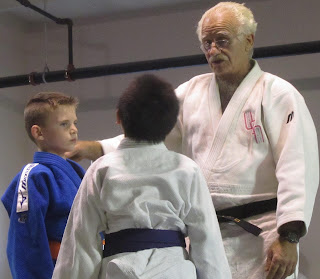 Before I was interrupted by the Sneakerdoodle Zebra Judo video of Ronda's two buns, I gave the beginning of the first chapter of the section on coaching, "Coaching matters" . This is the beginning of the second chapter in that section, "Smart enough to do it". We're just getting started on this chapter so feel free to jump in with comments. (Photo courtesy of Riley McIlwain - thanks, Riley .)

Love is not enough.

By itself, caring about your players won't build champions. The first two sections of this book gave specific techniques, exercises and drills, both for physical conditioning and matwork. This chapter gives specifics on how to be, and become, a smarter, better coach. Of course, that is a whole lot of books all by itself, so we’re following the same tactic of the first section of focusing on the areas we think are too often overlooked.

The first of these areas *I* call developmentally appropriate coaching, being a professor and all, and Jim calls recognizing the difference between children and adults. Whatever you call it, there's a need to adjust your coaching based on the physical and mental differences between junior and senior competitors. A second area is individualized coaching, fitting your program to the strengths and weaknesses of the athlete. The third area is building mental strength. That strength includes motivation to train harder and longer in practice, and to face down fears and anxieties in competition. Anyone who claims never to be anxious before a competition is either stupid or a liar. The skill to learn is to overcome those fears and come out on top despite them. The fourth area is matside coaching. This is where the coach is most visible and where too many people let their ego get in the way. If you admit that you don't know always what you're looking for when a player is on the mat, or what is the best thing to say, well then, you're an honest person because this is true for all coaches at least some of the time. Hopefully, after having read this chapter, you'll find yourself in that position less often. We'll give you a preview right now by telling you that we believe "Less is more". During or just before a match is not the time to be teaching your player techniques. That's what you should have been doing the months before the tournament and if you didn't do it then, it's too late now.


--  Well, there is more, but I have to brush Julia's hair. I told her that I needed to come up with the last sentence for this post first. She suggested, how about this

Besides developmentally appropriate coaching will you be writing about level appropriate coaching? It is not only different to teach different age groups but different level judokas. Not every one is going to be coaching the olympic selection, actually most of the readers of your book might be athletes that have are starting to coach a local club with some white, green and blue belts. For these athletes, what I find it is the best to say when I am coaching their matches, is to remember them of the ashi-waza swipes. It keeps them moving around the mat and it creates opportunities for them to use their techniques instead of a match of static strengths.
On another subject, is there some kind of written code of conduct for coaches on competitions? If there is none, it would also be appropriated for a smart coach to know that it is not good to scream at their players/referees/other coaches. We have all seen the poison that it inflicts too many times. It is appropriated for the player to express their emotions, but I think that the coach should be an example of serenity and control (at least on the outside) that the player can rely on. The thought is that it should be about the player, not about the coach.

Yes, we will be writing about level appropriate coaching. A major part of one of the coaching chapters is recognizing the individual. This includes coaching recreational players different from international competitors as well as coaching children different from adults.

While your idea of serenity sounds good, uh - you've never MET me or Jim have you?

I have never met you or Jim. Next time that I fly to the west coast I will try to participate in one of your training sessions.