is a brag I have heard rather often from a certain type. I have a confession to make:

Gasp! And I have a sixth-degree black belt!  Yeah, I have a bunch of of good medals, too. How can that be. What a travesty!

I don't believe being a good judo player, or a good coach, is a matter of knowing every possible technique. In fact, think of the number of times you have seen a player hesitate in a match. For example, one player attempts a throw and misses because the opponent stepped out of the way or pushed the opponent down.

Both players hesitate and in the end nothing happens.

In a position like this, most people would probably try a sankaku time (also known as a triangle choke). I have no idea who the person is doing it in the video in that link but her sankaku looks pretty typical in that it takes a while to sink in.

I don't try sankaku from here for three reasons. First, I just don't do sankaku because for most of my judo career my right knee did not bend (I injured it seriously as a teenager). Second, even if I could do sankaku it probably would not be my technique of choice because so many people do it that your competitor is generally expecting it. The third reason is that it is just not the style of mat work that I do. 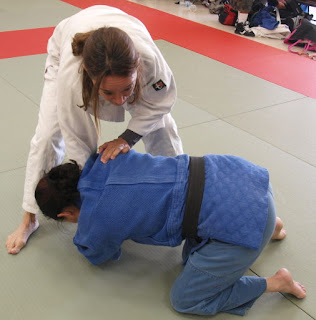 Here is what I do. First, as in the picture above, I get the hell out of the way so that she can't throw me. Notice I have stepped around her so that I am at her head and I am pushing down on her shoulder, putting my weight on her to stop her from trying to pop up and throw me.

Next, I am going to DIVE over her towards her hips at a 45-degree angle  (and you thought there was no use for geometry in real life). If you aren't so good at geometry, look at the picture below. 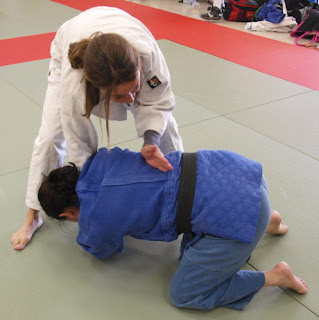 Do NOT dive straight over or you will end up under your opponent, get pinned and look stupid. And I will say, "I told you so."

You are going to do a rolling break fall and as you do it you keep your right hand on the lapel, in the exact same grip it was from the time you started standing with a right lapel grip. This hand never moves. Just hold on to that grip for dear life. 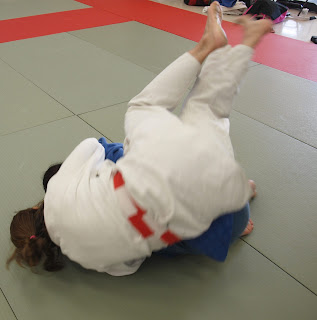 Notice the movement in the picture below. You are sliding your hand under her arm and behind her head as you are rolling over her body NOT after you have completed the roll. 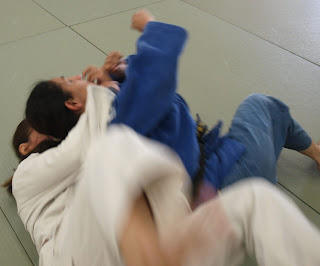 The picture below shows the position as the attacking player is in the middle of the roll. You can see that her right hand has hold of the lapel that is now pulled tight under the blue player’s neck. Her left hand is under the arm and moving behind the head. 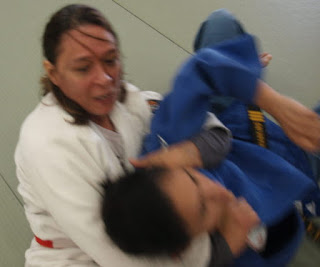 Instead of continuing to a standing position as you would in a regular rolling break fall, you are going to slide back on to your stomach as shown below. 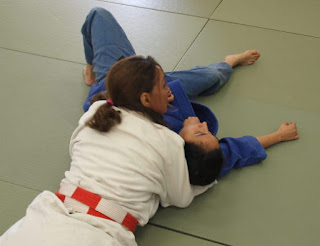 At this point, you are both choking your opponent and have her in a pin.

DrAnn have you ever fought a guy who is a boxer?
My boyfriend boxes and is pretty good at it.
I've been doing judo since I was 14 (i'm 24 now).
Maybe this is alittle twistd by I was thinking it would be funny if I went up to him at the gym right after he got done sparring and take him down and tap him out right away.

I always tell him that if I get him down I could EASILY tap him out. and all of his boxing would be useless :)
He's not mean or anything to me. I just think he needs to know where the chips stand in our relationship *LOL*!!!

Have you ever went against a boxer before?
I don't know what it is but I just don't like boxing. But it's crazy to think that in a street fight someone like me could probably kill some like a Mike Tyson. I have no doubt I could snap his arm and choke him out.
It just bugs me that I have this ability to beat any of these high paid boxers. Lil' ol me. 5'7 140 lbs.

I'd LOVE it if your daughter would get matched up with a boxer. You know she would leave him in terror and pain on the ground.

Who's the wrestler girl in this pic?


In a street fight how quickly do you think Ronda could take either of those boxers???

Forgive my ignorance of judo mat work, but do you go for this roll because of the surprise factor/disorientation that comes from the roll?

I'm a wee bit bigger than you (240 lbs after these holidays, unfortunately), so I would be more inclined to drop my left hip on to the opponent's right shoulder, maintain the grip on the lapel, but then start walking myself counterclockwise around toward her head, like in the classic "clock choke." It's a tight choke.

I'm just curious about the "why"s that go through a world champion's mind, since I'll never reach those heights, myself.

Hey, Al -
It's physics - I DIVE into that roll. If you ever saw kids do the game (that all organizations want to ban because it is dangerous) where they do a rolling fall over four or five other kids, it's THAT stretching out movement. The reason I do it is that when I make that dive the MOMENTUM carries me over and pulls my opponent with me.

Thanks for pointing that out because the diving and momentum is a really important part.

Remember, I am doing this for competition which is by weight division. Even with the momentum, this would NOT work with a 120lb player against a 240 lb player. Thanks for point that out,too.

Shaylee -
Let me give you some relationship advice ... real relationships between a boyfriend and girlfriend are NOT built on competition. I've often been asked whether I could "take" this man or that man I was dating at the time. My answer is always the same - if we ever get to the point when we are hitting each other, the relationship is over. It's not about who is tougher. You're supposed to have each other's back.

If you like this guy, why on earth would you think it is funny to throw him and arm bar him unless you are training together?

As to whether you could take Mike Tyson - I doubt it. How many real street fights have you been in? I've been in a few and I know Tyson has, too. In a fight, I would throw a brick at you. I'm little and old but I'm not stupid.

You're right Shaylee, that is twisted to think that.

Also, you're fooling yourself if you think that a boxer is just some push over in a fight because he doesn't know how to grapple.

With my modest judo/bjj skill I made the mistake of grappling with a very large friend who has really no grappling experience but is a monster of a man (6'2. 255 lbs and benches over 380lbs).
I thought I had him in a triangle only to be lifted high in the air and slammed on my back. My right shoulder was in terrible pain for a long time.


Maybe you should stop with the training and see a psychologist until your in a stable mind set and correctly view martial arts before going forward.

you hit the nail on the head Shaylee, that is "crazy to think that".
My only guess is that you've never been punched before.
Mike Tyson is very correct when he says "everyone has a game plan.... until they're punched in the face."
Because I hate getting punched (and I'm not afraid to admit that) I would never do mma again.
I'll stick with grappling by itself. And not because I think of it as beating someone up. Simply because it's fun to test my skill level.

Don't think I asked you Lurker.
Wrestling doesn't use submissions and wrestlers mainly use their upper body strength. I used to be a gymnast. So however strong you think your arms are my legs are much stronger. Transalation - you'd get stuck in any hold and forced to tap.

And if you were too dumb to not grab your big buddy's leg while you had him in a triangle then that's your own fault. I wouldn't make that mistake. All of your friend's size and strength would mean very little as I hyper extend his arm. He could bench press 480 pounds my legs are still stronger.

Lurker vs shaylee ;-) set it up ann I will pay to watch this $$ is on shaylee.

Anon,
Shaylee has little idea of what she's talking about.

One terrible thing that mma has wrought on the world is the tough guy/tough girl attitude.

I have no interest arguing that my wrestling skill could beat her judo skill.
As I said before - I don't grapple because I have or need any sense of dominance over a person. I like it in the way that a person likes playing the guitar or wood working or whatever. It's just an interest of mine.

But don't get me wrong - to assert that wrestling relies solely on upper body strength is just silly. I'm not going to even waste my time with that one.

Shaylee, by all means :think that you can easily tap me out. I could careless.
But, for your own sake watch out who you open your mouth to in person. I hope they're as forgiving and able to see your immaturity for what it is like I'm able to do.

And a quick tip if you choose to attempt to 'pull rank' on the next boxer you meet: they punch fast and they punch hard. Come in with your chin up and I'll put $$ on them leaving you out cold.

One stupid reason to get in street fights is that people have guns. Another reason is that it is just a bad way to settle things and a waste of time.

As for your legs being stronger than his arms - I once arm barred a team mate who, when I had my whole body cranking on his straight arm, he curled my entire body weight with one arm and slammed me on my face on the other side of his body.

When I was being armbarred in the British Open, I did the same thing and won the match.

Who could possibly be in good enough shape to curl your entire weight with one arm?

Dr.AM,
Again - thanks for bringing sanity to this discussion.

The way so many kids view martials arts is very disturbing.

Bicep curl arm bar defence can actually work? :O
Duly noted.
I wonder if anyone has a neck strong enough that they could flex hard enough to stop you from tightening the choke.

I feel like I've wandered into martial arts planet

Wow what a beautifully dynamic move. I can't wait to try it on the next turtler I play!